The River Elbe originates in the Karkonosze Mountains of the Czech Republic (1386 m above sea level). It covers a catchment of 148,286 km2 and has a total length of 1091 km of which 361 km are located in the Czech Republic and 730 km in Germany. The Elbe passes through the German Federal states of Saxony, Saxony-Anhalt, Lower-Saxony, Hamburg and Schleswig-Holstein before it reaches the North Sea in the north west of Germany. The estuarine part is about 140 km and begins at the weir in Geesthacht where the tidal influence starts. Approximately 10 km upstream of the Port of Hamburg, the estuary divides into two branches, the Norderelbe and the Süderelbe which unite again in the port area. The main tributaries of the estuary are the Ilmenau, Este, Lühe, Schwinge, Pinnau, Krückau, Stör and Oste. At the city of Brunsbüttel the Kiel Canal connects the Elbe with the Baltic Sea. 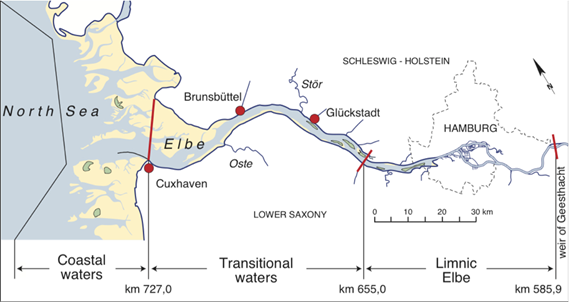 The shape of the Elbe estuary is highly diverse and continuously changing. Its mouth is characterised by a steadily moving multiple channel system. Further upstream the Elbe consists of a main channel and smaller anabranches. The estuary is classified as meso-tidal and partially mixed based on its salinity profiles. The turbidity maximum is mainly located in the area between the city of Brunsbüttel and 40 km upstream, however its shape and location relate significantly to the rate of freshwater discharge. The tidal asymmetry, with a shorter flood period compared to the ebb period results in the comparatively higher velocity of the flood currents. Together with many anthropogenic modifications, it has led to a strong upstream transport of sediments, the so-called tidal pumping effect. The sediment deposits and accumulates in the Hamburg region, as the ebb current generally is not enough powerful to transport the sediments back out to the estuary mouth and the North Sea. This process is enhanced in summer months during low freshwater discharge. Therefore, high sedimentation rates are a major challenge for the Port of Hamburg as the fairway and harbour basins have to be continuously maintained to guarantee the accessibility of the port. Within the last years the volume of dredged material has increased considerably in the port area. Climate change is expected to further enhance this process through sea level rise, more low freshwater discharge situations and a higher tidal range. Until the early 1980s, the Elbe was heavily contaminated. Today contaminant loads originate mostly from earlier inputs and are sequestered mainly in the sediments. However, since the German Reunification in 1989 and the establishment of the International Commission for the Protection of the Elbe River (IKSE) in 1990, the Czech Republic and Germany have successfully worked together to improve the water and sediment quality status. However, during the summer months, periods of low oxygen levels still occur regularly downstream of Hamburg. It is assumed that they relate to the morphology in combination with high nutrient loads of mainly agricultural origin, the latter resulting in high biomass production of phytoplankton with a pronounced peak in early spring. The algae die when reaching the deeper parts of the Elbe and the port basins, and subsequent microbial degradation of the algal biomass leads to the oxygen depletion.

The Elbe is the artery of the metropolitan region of Hamburg having about 4.3 million inhabitants. The estuary functions as an important shipping channel to the Port of Hamburg which is the most significant economic driver in the region and which directly and indirectly employs about 166,000 people in the Hamburg metropolitan region and 275,000 in Germany. The Port of Hamburg, located 130 km inland, is the largest port in Germany. More than 10,000 ships annually, half of them container ships call at the port from worldwide destinations. The goods are distributed to and from the hinterland via railway, truck and inland navigation vessels. In addition to Hamburg, there are other seaports along the Elbe estuary: Stade, Cuxhaven in Lower Saxony and Glückstadt, and Brunsbüttel in Schleswig-Holstein. Industry, e.g. chemical and oil industry, and power stations (nuclear power stations are successively replaced by mainly coal), are located within or near the Port of Hamburg or near the above mentioned cities Stade and Brunsbüttel. Agriculture is the most prevalent land utilisation, with internationally-important orchards in the region of ´Altes Land´, downstream of the City of Hamburg. Agricultural land is drained into the Elbe and the Elbe water is used for irrigation. Based on the very fertile marshland soils farming in the area is highly productive. Fishery is a traditional use of the Elbe estuary and prawn fishing is typical in the mouth.  Eel and the spring-caught smelt are economically the most important fish.The tidal river Elbe is also relevant for recreation and tourism. Approximately 120 marinas are situated along the estuary and the Port of Hamburg is becoming an ever more important hub for cruise ships. In addition, water sports, angling and beach life, especially at the mouth, play an important role. 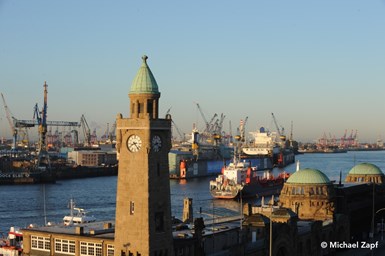 The estuary is a unique habitat for highly specialized flora and fauna, which is protected by European environmental legislation, for example the Water Framework Directive and the Birds and Habitat Directives. The mouth of the Elbe is part of the Wadden Sea which has been declared a UNESCO World Heritage site, and it is located in the German Wadden Sea National Park. In addition to many national protected areas and also several Ramsar sites, approximately 90% of the area of the Elbe estuary is designated as Natura 2000 sites because of its outstanding international value for many endangered habitats and species, some of them even endemic, such as the Elbe Water Dropwort. Due to major improvements in water quality, fish diversity and abundance have increased since the early 1990s. With 79 species, the Elbe has a very high fish diversity. A seal population, which follows the migrating fish into the estuary, lives permanently on the sandbanks near the city of Brunsbüttel. Harbour porpoises can also be found as far as up to the city of Hamburg when they follow their prey, e.g. twaite shad or smelt during their spawning season. The wetlands, mudflats and foreshore areas, reeds and alluvial forests are used by many species of migratory birds. 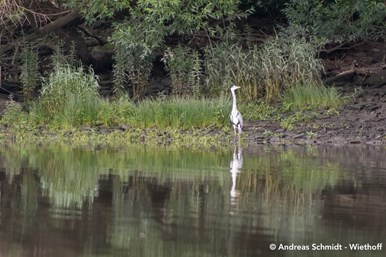