On one hand, a situation where contaminated marine sediments in the harbour need to be tackled, and on the other hand, the operations of the Gothenburg harbour lack space on-land. How convenient it would be to solve these two problems simultaneously! But that’s not possible, is it? Well, actually it is – researchers from Chalmers and COWI are working to enable remediation of the sediments on location, whilst stabilising them into steady ground at the same time. 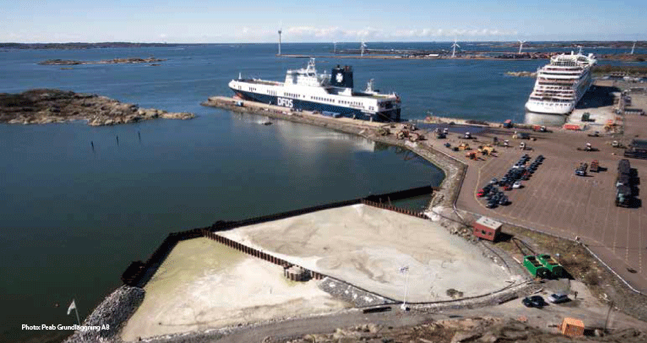 Marine sediments in the Gothenburg harbour, located in the estuary of Göta Älv, are heavily polluted due to various harbour activities, inflow from urban runoff and longstanding use of antifouling paints, resulting in high concentration of organotin compounds (OTs) like Tributyltin (TBT).The toxic effects of TBT on aquatic organisms are well documented, and although the use and emissions of OTs are decreasing, the accumulation in marine and coastal sediments remains a problem – as in the Gothenburg harbour.

A visit to the Arendal site

“Organotin compounds like TBT can knock out ecosystems of marine seabeds, and research has shown that they bioaccumulate – move on through the nutritional chain via small organisms to marine creatures, fish and mammals. Degeneration products of the toxin TBT has actually been found in women’s breast milk,” says Anna Norén, PhD Student at Chalmers University of Technology.

“This is why we are working on finding a way to treat and remediate marine sediments, and also to develop a method to separate and recycle metals from the sediments. If the remediated sediment could be utilised, that would be a bonus!”

A new technique called the s/s-method will do just about that. The sediments are then solidified and stabilized by adding binders consisting of cement and granulated blast furnace slag. But due to the high concentrations of TBT in the sediments, the permit for the construction works contains specific conditions regarding TBT leaching from the construction – meaning stability is crucial.

Sediment at the Göta älv

“Finding the optimal binder recipe is crucial and has been done in steps. The first step has included laboratory tests and evaluation of geotechnical properties and leaching of contaminants. In the next step we performed a field pilot-test where approximately 10 000 m³ of contaminated sediments were stabilized and placed behind an embankment,” says Anna E Wilhelmsson, Project Manager at COWI.

Thanks to the s/s-method, the sediments from the Göta Älv estuary can be utilized as filling material for building a new port area instead of disposing the sediments on land or at sea, andan entirely new terminal will be constructed west of the current ro-ro terminal. Another key issue addressed by this concept, from a port management side of the story, is the recurring need for dredging for maintaining the depth in the fair-ways and the harbour areas.

“What is new and innovative about the s/s method is that it has been developed and commercialized to be used in full scale. The method has previously been used in Port of Gävle – but using sediments where pollutants have been degraded, metal leached out and recovered before stabilisation has not been studied before,” says Anna E Wilhelmsson.

By treating the sediments, a more circular economy is obtained through reduced landfilling and reduced use of virgin materials, as well as increased use of resources by recycling valuable metals. At the same time, the risks associated with contaminated dredged material are significantly reduced.