HyTrEc2: The Researchers of The Hydrogen-Generation

The HyTrEc2 project is on a mission to ensure that a hydrogen economy flourishes in the North Sea Region. A crucial aspect of a hydrogen-fuelled energy transition is ensuring that there is a pool of educated individuals to draw from. HyTrEc2 has been endeavouring to inspire the next generation by engaging in outreach events; creating training modules; and by employing them.  A PhD candidate and a young researcher are currently working for HyTrEc2 with partners University of Tromsø and Research Institutes of Sweden.

‘I enjoy my work researching and analyzing tech for hydrogen mobility, mainly fueling stations and vehicles. I appreciate the broad scope of HyTrEc2.’

‘Hydrogen has shown potential to be viable as a sustainable alternative for transportation in the future, however the challenge for today is to establish the infrastructure required to produce and distribute hydrogen in a sustainable way. Solar powered hydrogen refuelling stations (Solar-HRS) are a potential means for this. The thesis investigates how the functionality and economics of such Solar-HRS can be further improved and optimized.

A Solar-HRS has three main functional components. Solar panels, an electrolyser and a hydrogen storage. The solar panels provide the station with electric power. The electrolyser is able to turn electricity and water into hydrogen and oxygen. The storage stores hydrogen produced by the electrolyser for later usage. By producing hydrogen with electricity from solar power the overall carbon footprint of the fuel is reduced compared to conventional means of producing hydrogen (Steam Methane Reforming). The question that remains is, how to design the system so that the hydrogen is produced as cheaply as possible?

To answer this question and also to gain further understanding of the functionality of the Solar-HRS system, a mathematical simulation model of the system was developed in MATLAB/Simulink. The model allows quick and simple investigate of how changing the parameters of the system (such as storage size etc.) affects the overall performance of the system (such as capacity to produce hydrogen and more)

The thesis explores two hypothetical applications of a Solar-HRS. The first case is a "Commercial-HRS". This HRS uses grid power but also has its own solar panels. The HRS serves commercial traffic that behaves in a semi-predictable manner. The second case is an "Off-Grid-HRS", this HRS is entirely solar powered. The HRS serves buses for public transport that always refuel at set times.

For the commercial HRS the thesis found that an increase in storage size would allow the HRS to consume more solar power and less grid power, saving some electrical cost. However the investment cost for increased storage was far to large to justify the savings, yielding payback times of hundreds of years. It was also found that a lithium battery can be a beneficial addition for the station.

As a conclusion the thesis found that solar power can indeed be a cost effective method of supplementing the power demand of an electrolyser. However relying on solar power to much as the primary source of power is not very practical for the operation of a fuel station.

The thesis also investigated if it is possible for a Solar-HRS to participate in other business opportunities, such as selling electricity from the solar panels to the grid or providing local industry with hydrogen. In general most of these options were often limited in both technical feasibility and economic viability. Selling electricity is potentially useful if the local conditions allow for it.’ 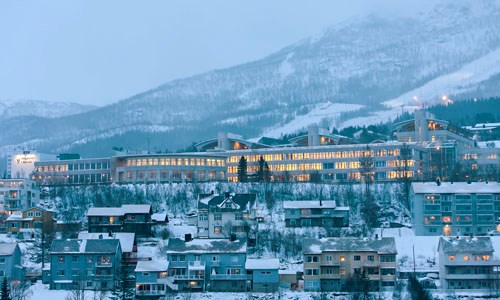 {UiT: Artic University of Norway campus on the hills}

Claudia is a first-year PhD candidate at the Arctic Center of Sustainable Energy, an interdisciplinary research center established by UiT Norway’s Arctic University.

Since the release of Norway’s first Hydrogen Strategy report on 3rd June 2020, a number of hydrogen initiatives have emerged around Norway, especially in Arctic Norway. Building on her master’s thesis on the prospects of blue and green hydrogen in Norway for energy export from a socio-technical perspective, her PhD research project aims to provide a region-focused analysis using three hydrogen projects in Arctic Norway as empirical studies. These initiatives were selected due to the diversity in terms of end-product types (compressed hydrogen, liquid hydrogen, liquid ammonia) and end-use applications (maritime use, energy source and energy export). This allows for an in-depth understanding of how the different hydrogen technologies will be diffused in various sectors in Arctic Norway, through the interactions between policymakers, companies, consumers, and local/coastal communities.

Arctic Norway stands out as a suitable choice of focus due to the diversity and scale of hydrogen initiatives in the region. Moreover, the abundant wind resources and lower population density compared to Southern Norway (which is more closely connected to the EU’s electricity grid system) will give Northern Norway a competitive advantage due to lower electricity prices. Since electricity cost represents close to 70% of green hydrogen production cost, the potential for Arctic Norway to lead in hydrogen demonstration projects in Norway is high. In addition, the replacement of Svalbard’s coal power plant with a hydrogen-driven energy system offers a unique opportunity to capture the complexities of an energy transition that takes into account the full value-chain from energy source for hydrogen production to end-use application of hydrogen.

The sudden emergence of hydrogen initiatives in Arctic Norway calls for the need to investigate the social impacts of the various hydrogen projects in Arctic Norway. This entails understanding the perspectives at the local community level and identifying possible tensions between the various sectors like the maritime sector, fisheries sector, electricity sector and energy export sector, which in turn can contribute to overcoming the barriers for accelerating a low-carbon energy transition. Through her PhD project, she hopes to provide valuable insights to the Norwegian policymakers that will facilitate better support for a sustainable energy transition in Arctic Norway as well as in the rest of Norway.

Masters Thesis can be found here: (7) (PDF) The prospects of blue and green hydrogen in Norway for energy export (researchgate.net)

HyTrEc2 is thrilled to be working with these two impressive individuals, helping them to bring about the hydrogen revolution.