Aberdeen City Council won the Scottish Green Energy award 2019 prize for Sustainable Development for it's Hydrogen Strategy. The accolade was bestowed on the evening of Thursday the 5th of December 2019 at a black-tie event in Edinburgh. The Council's victory is particularly impressive as the category had many interesting, innovative contenders pursuing different forms of sustainability. Information on all the contenders and the other prizes can be found here. 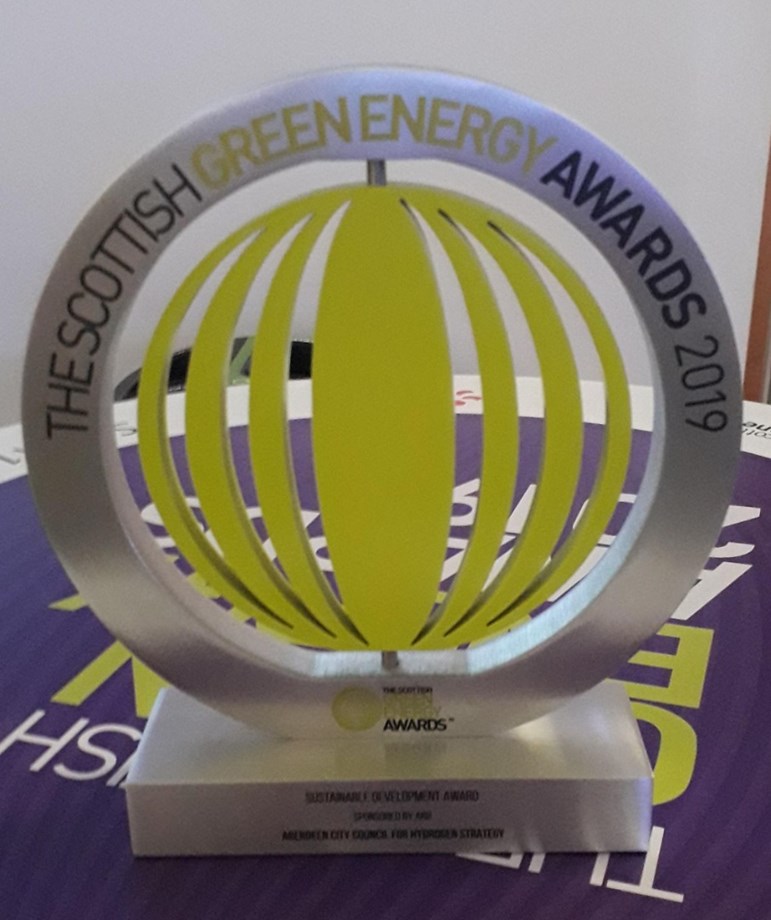 The Council's Hydrogen Strategy 2015-2025 dovetails with many of HyTrEc2 ambitions, as the majority of the Strategy focuses around creating opportunities for Renewable Hydrogen adoption in transport.

{The seven objectives of the Aberdeen City's Hydrogen Strategy}

The work of HyTrEc2 is allowing the Strategy to be achieved.

The vehicle pilots which are being undertaken through the HyTrEc2 project have allowed a range of stakeholders within the City to engage with Hydrogen vehicles. For instance funding from HyTrEc2 allowed the council to retrofit a Nissan e-NV200 and to purchase a Renault Kangoo, both of which are leased out to businesses for trials via the CoWheels car club further details can be found here. The work of HyTrEc2 has allowed Aberdeen City Council to bring Hydrogen vehicles to more individuals and organisations. The hope is that by allowing organisations to experience Hydrogen vehicles for themselves, they will recognise the benefits and may consider uptake in the future.

HyTrEc2's focus on renewable Hydrogen mirrors Aberdeen's. The HyTrEc2 research carried out by CENEX regarding the carbon footprint of various forms of Hydrogen (grey, blue and green) has established in all minds that green Hydrogen is the only option to ensure the biggest reduction in greenhouse gases connected to transport. The onus on the creation of green Hydrogen has encouraged ACC to place a green tariff on the Aberdeen City Hydrogen Energy Storage station. In addition, ACC with the assistance of HyTrEc2 has set about designing a Hydrogen hub in Aberdeen, more information can be found here.

HyTrEc2's work mapping the supply chain has been instrumental to providing the detailed insight needed to help strengthen and develop the Hydrogen market. For additional information regarding the supply chain mapping click here. Furthermore, HyTrEc2 has instigated many supply chain meetings and conferences, such as the Hydrogen Festival, which have been excellent at facilitating dialogue between various interested organisations and encouraging collaboration.

It is crucial in any infant industry to ensure that education/ training is a priority, therefor it is no surprise that both Aberdeen City Council and HyTrEc2 place so much importance on it, especially given the specialist knowledge required for the field. Aberdeen are keenly awaiting the delivery of work package 5 part 2 of HyTrEc2, the first phase of which was completed recently. The City have already engaged in talks with local colleges to secure provision of the upcoming course being developed by HyTrEc2 under the lead of UiT.

Finally, the shared knowledge that partnership of the HyTrEc2 makes ACC privy to is one of the greatest advantages of the project. This pool of shared knowledge is exactly what is needed to create meaningful international regulation that ensures continuity across the sector and across the region, which will present a more attractive prospect for the private sector, and secure suitable protection for the consumer. Therefor, involvement in HyTrEc2 is vital for ACC's ambitions regarding regulatory framework.

It is clear that the City's involvement in HyTrEc2 has provided the opportunity to make their Hydrogen Strategy a reality.

So, the evening was a success for Aberdeen City Council; for Hydrogen and for HyTrEc2!