One of HyTrEc2's core aims is to realise a green hydrogen economy. Green hydrogen is produced using renewable sources and thus produces no emissions in the creation, as well as the use of the hydrogen. By creating hydrogen in this environmentally-friendly way we maximise the emission-savings of the transition to the clean fuel. Furthermore, by generating hydrogen at periods of intense renewable supply (i.e. very windy or very sunny day) we can help to reduce some of the curtailment and intermittency issues associated with renewables at present. So it seems a real win:win situation, which makes it all the more confusing that the majority of the hydrogen currently produced is not ''green'. Unsurprisingly, the rationale behind this is cost, so HyTrEc2 have carried out two business cases in Aberdeen and Drenthe to better understand the economics behind green hydrogen production. 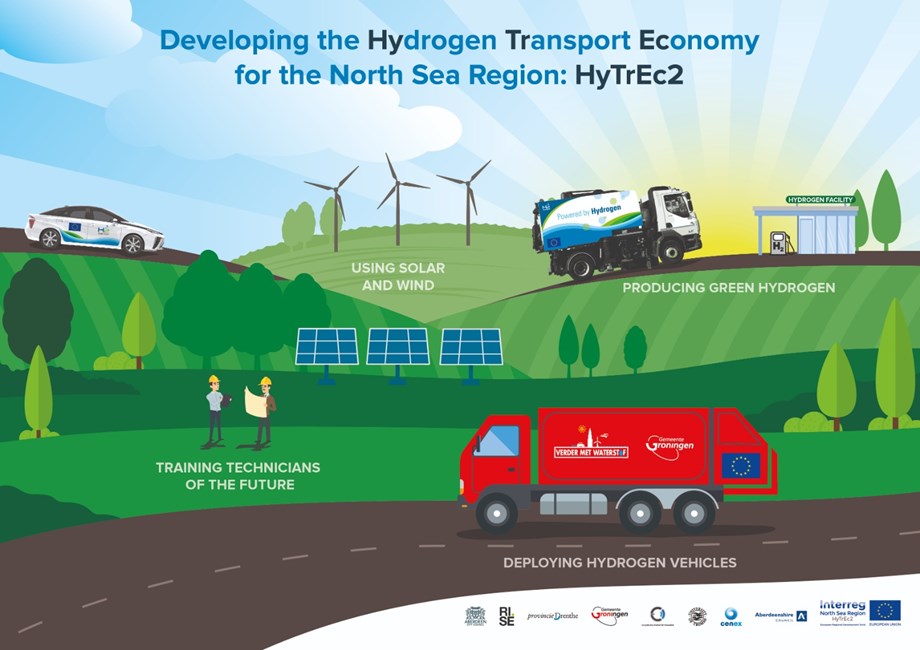 In late 2019 Aberdeen City Council commissioned consultant Element Energy to establish whether there was a business case for Aberdeen to become a large scale producer of cost-competitive green hydrogen and whether there would be commercial interest from the market in establishing Aberdeen as a “Hydrogen Hub”. The study, funded through HyTrEc2 with Opportunity North East and Scottish Enterprise evidences that the Hydrogen Hub will be key to unlocking a host of potential economic and environmental opportunities for the region with public sector support. As a result the Council has received significant levels of interest from the Scottish Government's Energy Transition Fund to facilitate its delivery with the Council committing further funding to ensure its successful establishment. In this matter, Aberdeen City Council are actively seeking a partner to develop the 'Hydrogen Hub' with and hope for announcement at COP26.

The HyTrEc2 project will seek to advance the use of green hydrogen throughout the North Sea Region and has various other deliverables to this end, so watch this space!