29 August 2019 - Published by Nele Jacobs
Through different international projects, we are establishing a network of genetic observatories in the vicinity of marine stations and Long-term Ecological Research sites (LTER) in the North Sea Region and other coastal European waters.

The network is funded by the Joint Research Activity of the ASSEMBLE+ program (http://assembleplus.eu) and the North Sea Region Interreg project GEANS (https://northsearegion.eu/geans/). The work is carried out in close relation with international European infrastructure and monitoring networks, like the European Marine Biological Resource Centre (www.embrc.eu) and the Genomic observatories network (http://genomicobservatories.org/).

The observatories consist of small three-dimensional units, which are attached to the sea floor, and consist of a stack of settlement plates, so-called Autonomous Reef Monitoring Structures (ARMS). These monitoring systems were originally developed during the Census of Marine Life project, and are today frequently used for passive collection of marine fauna (http://arms.biocodellc.com/). Because of their three-dimensional structure, ARMS mimic the complexity of hard bottom marine substrates, and attract both encrusting species and motile organisms.
In GEANS, the ARMS network will be used in the assessment of Good Environmental Status as part of the European Marine Strategy Framework Directive (MSFD), mainly related to measures of benthic biodiversity (MSFD Descriptor 1), and measures of Non-Indigenous species (MSFD Descriptor 2). ARMS, as a standardized sampling technique, combined with today’s powerful molecular methods will enable the monitoring of marine communities over large areas, such as the North Sea, says Matthias Obst, the coordinator of the network.
As a pilot study within the GEANS project, genetic protocols will be developed and harmonized, which will be applied in the assessment of ecological status and changes in hard bottom benthic communities of near coastal environments.
In 2019, 5 genetic monitoring sites in the North Sea Region, will be deployed in early June (indicated with red dots in the map). At the same time, we continuously integrate our genetic monitoring system with European deployments outside the North Sea (indicated with yellow dots in the map). This will help to make genetic biodiversity assessments more consistent even on the European scale.
If you want to know more, follow our updates at the GEANS website, or listen to our presentations at the 8th International Barcoding of Life Conference in Trondheim in June (http://dnabarcodes2019.org/), or contact matthias.obst@marine.gu.se. 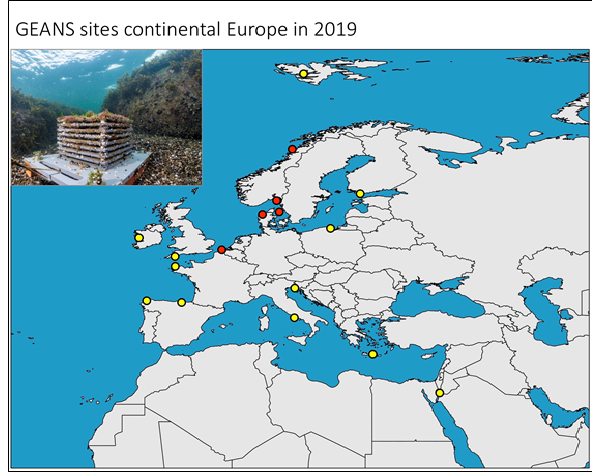