Opportunities for innovation, a session with entrepreneurs about resilience

04 January 2019 - Published by Edward Sterenborg
In a session with entrepreneurs in the Ablasserwaard-Vijfheerenlanden we talked about flooding, resilience and opportunities for innovation. What can companies do themselves in case of flooding? How can they prevent and limit damage?

On the 8th of October 2018, entrepreneurs from the Alblasserwaard-Vijfheerenlanden, together with experts, spoke for the third time about flood risk management in the area and how to become resilient. Introductions were provided by Lucy Smeets (FRAMES pilot Alblasserwaard and expert in multi-layer safety from the Province Zuid-Holland) and Carlo Post (director of the safety region Zuid Holland Zuid). They emphasized that the main strategy in the area is to prevent flooding. At the same time, the government (the safety region) has the task of mapping out all risks and designing an approach for evacuation.

Water awareness
The intention was to brainstorm with the entrepreneurs about innovations to limit damage or how to take the area back in use as quickly as possible after flooding. However, the conversation took another turn as the entrepreneurs wanted to know what actually happens in the event of flooding, and especially what is required in cooperation between entrepreneurs and government. The importance of water awareness and communications among entrepreneurs was highlighted several times as a first step towards resilience. 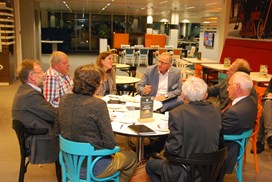 Cooperation
The entrepreneurs understood the importance of cooperation. When a flood warning is issued, they want to close the company and make sure that assets are in a safe place to prevent consequential damage. Hazardous substances and cattle need to be evacuated as well. This requires, among other things, means of transport and evacuation routes. Thus, cooperation between entrepreneurs and the government is important.

Useful suggestions
The entrepreneurs also discussed evacuation and recovery. For example, they suggested to set up the new town hall as a floating building to serve as a refuge in the event of flooding. The government was called upon to work with colour codes, just as with terrorism, which indicate risk levels. Entrepreneurs can fine-tune their plans. With regard to recovery, entrepreneurs indicated that machines needed for this must be in safe places so that they can be used after a flood.