Send in the diggers!

15 February 2019 - Published by Edward Sterenborg
News from the Tees Rivers Trust in the UK. With an unusually dry autumn still influencing ground conditions, work to create wet habitat as a complimentary flood resilience measure began in earnest on Lustrum Beck at the end of October 2018.

The first ponds and wetland cover an area of approximately 2 ha and have been created in an area of amenity woodland at Coatham Marsh. It was an exciting moment to hear the rumble and feel the ground shake as the machines moved in, which included a 21ton 360 excavator and a massive bulldozer. 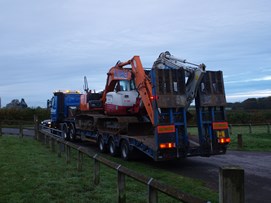 The work took just under 2 weeks to complete and we had some great comments from many people who regularly use the area to walk dogs, the majority who live downstream in Stockton and who are aware of the flooding issues. It was an opportunity to explain about the FRAMES project and how so many partners are working together to address the issues of flooding and helping to build resilience.

Once completed, the ponds will be allowed to fill up with water naturally. We uncovered and smashed 3 tile land drains which crossed the pond area and which fed directly into the beck .This water will now be intercepted and help reduce the peak flow in a flood situation. 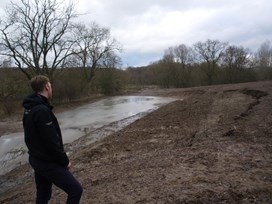 The next phase of this work has now begun across the road in Burn Wood. Here we are creating 700mtrs of track in order to access the upper sections of the woodland. Once accessible, we will be re-connecting the beck with its old flood plain and meanders and in so doing will create around 6ha of water dependant habitat.