WeSpark and Parteon look for participants in pilot project

07 May 2021 - Published by Dominique Dhondt
WeSpark and housing corporation Parteon are looking for 200 homes that want to participate in a pilot project. Together with the residents, we're going to make energy consumption transparent in order to make optimal savings," says Robert Hemmen, director of WeSpark.

The 200 tenants and homeowners will receive a free EARN-E after they sign up for the pilot project. This is a small energy meter that can be connected to a smart meter. Once the EARN-E is connected, one has real-time insight into one's energy consumption. So you know exactly when and how much energy you use and generate (if you also have solar panels). We aim for every participant to save at least 10% on his/her energy bill. That can add up considerably. 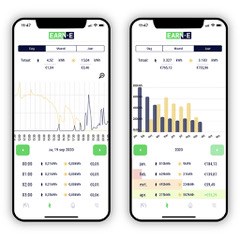 With this pilot project, WeSpark and Parteon are taking the first step towards creating an energy community in the Zaan region. In addition, the energy data of the 200 (anonymised) participating households will be included in a study by students into energy communities and the use of simple energy tools such as the EARN-E.

The pilot project is also part of the European project EMPOWER 2.0, which is made possible by the Interreg North Sea Region (NSR) programme of the European Union. Under the leadership of the municipality of Zaanstad a cooperation of 14 partners in the Netherlands, Belgium, Denmark and the United Kingdom has been formed. The goal of EMPOWER2.0 is to increase (transnational knowledge about) local involvement and local ownership in the energy transition.

You can register via www.wespark.nl/earn-e. Participation is completely free of charge and does not require registering as a client or member. However, it is important that you have a smart meter. The pilot project starts in May and will last until the end of the year.