One of our eight pilot areas in CUPIDO is located in Middelburg in the Netherlands. Here the local partnership consists of businesses, citizen, local representatives in tourism and recreation, knowledge partners, artists and cultural providers in the city. The aim of the pilot is to arrive at a supported, clear positioning and profile of the city.

Middelburg is the capital City of Zeeland, the seat of the provinicial government and has around 50.000 inhabitants. Middelburg is also a real student city thanks to University College Roosevelt.

At the time of the East India Company, Middelburg was the most important Dutch city after Amsterdam. Ship’s carpenters were building ship after ship while the import and export of such products as cotton, cinnamon and tea was flourishing.

Thanks to this rich history the municipality of Middelburg ranks 5th of the Netherlands concerning the presence of monuments. A large number excels by its characteristics, representative features and helped shape history. Hundred heritage artefacts related to the Commerce Compagnies between 16 th and 19 th century re owned by the municipal government. The municipality developed an integral strategic vision to maintain and strengthen the historic core. Main goal is to preserve the listed buildings. They are the décor for thousands of visitors. They tell the history of the city.  The preservation of heritage and place association is to be fostered by connecting creative industries, technology, education and exploring durable business and economical possibilities.

The local partnership of the municipality in the CUPIDO project consist of bussiness, citizen, city management, knowledge partners such as University College Roosevelt and HZ university of applied sciences, artists and cultural providers in the city. The  consortium contributes to a  national platform of experienced stakeholders ( Dutch Golden Age). The aim of the local partnership is to arrive at a supported, clear positioning and profile of the city. 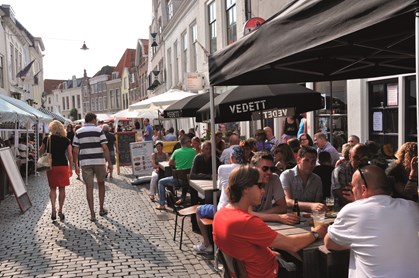 It has for many years been the ambition of Middelburg to foster the preservation of heritage and place association by connecting creative industries, new technology, art and culture.  And explores its cultural potential for job creation and economic profit.

The CUPIDO project will be embedded in the strategic economic touristic city vision, implementation programme  and ambition of the city. For the city’s incubator role transnational exchange is essential for enhancing creativity, innovative concept development, new product market combinations, the gathering and sharing of knowledge and experience, the identification of best practices to use Europe- wide and the identification of unique and common narratives.

A lot of goodwill, creativity and attention have been generated for the city in recent years. And yes, of course Middelburg has to be put in the picture even more. At least as important, if not more important, is that a picture needs color and content. A clear position and profile of Middelburg is missing so far. That

From a visitor or tourist perspective, the city center of Middelburg can be divided into two parts. A city with an interesting variety of shops that is well visited, especially in the summer. This contributes significantly to the vitality and quality of life in the city.

Middelburg, however, stands out in its 800 or 1000 years of history, in its identity. This is especially visible in the other part of the city. At the moment, visitors are not tempted enough to experience this part of the city. This is quite understandable, because there is actually little to do and to experience now. However, this cultural historical part of the city is intertwined with many stories, few of which are currently being told. So there is the potential for this city part to be distinctive: stories and meanings just have to be told; experiences just have to be created. This will only be a starting point: the stories, meanings and experiences have to be brought to the visitors as well, both virtual and physical by a new center of excellence.

The question is how can we tell these stories and seduce visitors into memorable memories that lead to a bond with the city.

What are you doing in your pilot and how will you work together?

The cultural providers and business partners will be involved in the process from the start. A select group of them will be interviewed. Information meetings, worksessions, workshops and a trend lecture will be organized. Trends will be translated into inspiring examples and scenario’s.  When elaborating the new product/market combinations and concepts, the focus will be on cultural, history and all seasons - not just on the summer season. We also need to help entrepreneurs to bring their own focus.

An important question is: How do we create enough interesting experiences in the historic cultural city of Middelburg, so that this part of the city gains meaning for the visitors as well? 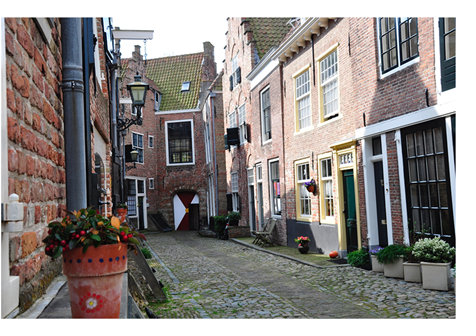 1) The first step will be to identify what Middelburg and Walcheren stand for. What are the core values of the city and its region?

The interview results with stakeholders ( business and cultural providers)  in the city give a good picture of the DNA and values of Middelburg.  This also indicates where the opportunities lie for a valuable positioning of our city.  The greatest opportunities lie where the core values of the city  match with the trends and values of today's consumers. This will make up a large part of the work to be carried out. Which core values and which value combinations match best and provide the best chance of success?

2) Next, we will paint a picture of the trends relevant to the field. Trends are developments in how we view society and are visible in people's behaviour. Some trends are already having an impact on the region, such as globalisation and demand economy.  Other trends are less visible or have not yet been translated. Many of these trends offer opportunities. We will describe and focus on the specific trends for the region and the themes. Examples of themes are nature, culture, design, sports, crafts.

3) Another important related question is: Who visits the city of Middelburg? In order to answer this question, it is important to have detailed information of the different visitor profiles. At the moment this information is missing. Based on our own analyses we can make an estimation, but we need more in-depth information. For instance, in order to be able to offer custom made experiences.

Middelburg is a must-see destination for anyone staying in Zeeland and Walcheren in particular. Especially when the (summer) weather conditions are less favorable, (groups of) tourists visit the city. This can be in the form of organized packages, via a tour operator, via self-organized day trips or multi-day stays. A large number of river cruises also moor in Middelburg. In recent years there is an increase of  cultural visitors exploring the city.

4) The possible target groups will be further analysed and exploired.  In our target group descriptions, we will base groups on the roots of the visitors on one hand and base groups on  values and lifestyles on the other hand. This last approach can be directly applied to concepts and marketing.  Those are the people who feel drawn to the scenarios.

What are the challenges? 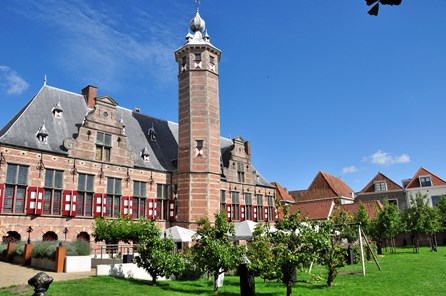 The city of Middelburg has a very extensive variety of shops and restaurants that largely owe its existence to the visitors. The most important activities are shopping, catering and terrace visits, strolling through the cultural-historical city and visiting galleries and museums. However, visitors can go shopping and having a drink everywhere. Middelburg will have to differentiate itself more in the future. In short: the differentiating character of Middelburg, its DNA, will have to be elaborated and expanded to preserve purchase revenue.

Middelburg and its high-quality cultural offer will have to be further strengthened for the benefit of the business. For example, by telling the stories that make this city so special and by making combinations between the cultural and the commercial offer. Extra attention must be paid to distinctive events as well and reception by developing the most important storylines and route experience. This in conjunction with a good digital infrastructure. After all, the visit often starts on-line.

Which stakeholders are involved?

Thelocal partnership of the municipality in the CUPIDO project consist of bussiness, citizen,  local representatives in tourism and recreation, knowledge partners such as University College Roosevelt and HZ university of applied sciences, artists and cultural providers in the city.

What do you hope to achieve and who will be affected by the result?

Based on the core values of the city jointly discovering opportunities for a valuable positioning of the city, in which its rich heritage, history, art and culture form the starting points for new concepts at company level. This data forms the basis for a future-oriented tourism and recreation policy.

A distinctive profile that results in Middelburg being able to welcome more visitors and generating more revenue. This preserves and strengthens employment.

Centre of Excellence bringing the story about Middelburg to Life

Economic and enterpreneurial masterclass “The Taste of the Golden Age”