07 June 2021 - Published by Anna Grude
On 29 May 2021, the monumental sculptural head Janus’ Fortress: Folkestone created by Chilean artist Pilar Quinteros was revealed at a public launch organised by Creative Folkestone and attended by representatives of England’s Creative Coast, the curator of Creative Folkestone Triennial, Lewis Biggs and residents of Folkestone.

In ancient Roman religion and myth, Janus is the god of beginnings, gates, transitions, time, duality, doorways, passages, frames and endings, usually depicted with two faces. Quinteros’s sculpture, which likewise presents two faces — one faced inland and the other gazing at the sea — symbolises the duality of borders: of looking outwards while protecting inwards, a dichotomy that the pandemic has made extremely pronounced. It also presents a link to Folkestone’s role of often being the first port for migrants entering Great Britain, leaving behind a past of deprivation and prosecution hoping for a new, better life. As Quinteros states, the head is ‘a monument to uncertainty’.

The artwork has been placed high up on the East Cliff above Folkestone overlooking the harbour and looks both outwards at Europe and inwards to England, contemplating the mixed fortunes of what connects us but also divides us.

The sculpture is made of chalk and plaster and will gradually erode and disintegrate. The artist’s intention was to make a kind of anti-monument, imposing in scale but ephemeral and vulnerable. Its disintegration also mirrors (and reflects on) the gradual erosion of the chalk cliffs and coastline — it's sited just half a mile from the ruins of the Roman villa that has now disappeared into the sea.

Her idea for this artwork came from the conversations she had during her research visit to Folkstone, and through learning about its history as remembered by the people of the town. She noticed the prevalence of military memorials, and the conception of the town as a fortress ringed around with Martello Towers. But it was the cliffs and their disintegration that struck her: these wonderful defensive barriers were also ephemeral.

This artwork forms part of England’s Creative Coast Waterfronts, 29 May – 7 November, an exhibition of seven new artworks connecting and celebrating the distinctive, creative coastline of Essex, Kent and East Sussex.

It is also part of the Creative Folkestone Triennial and whatever remains of Janus Fortress: Folkestone will be celebrated with a procession at the end of the exhibition on 2 November 2021 with a public procession. The procession is part of Creative Folkestone’s local engagement programme and will be supported by CUPIDO – so watch the space for more news. 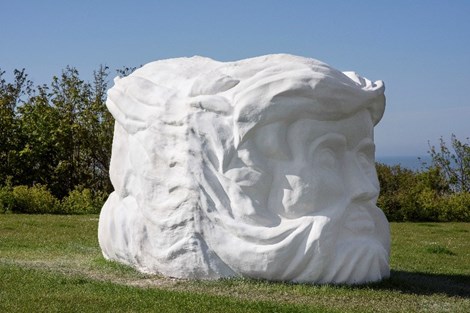