28 February 2020 - Published by Anna Grude
Digna Kosse and Lucas Mullié - who founded their studio Foodcurators in 2012 in Rotterdam – recently relocated to Middelburg. The name (Foodcurators) expresses the desire to create a new discipline: a combination of designer, chef and curator or “concept developers with a focus on food”.

The fact that Digna and Lucas are relatively new in the city of Middelburg enables them to have a fresh perspective – to literally look at the world “from over the dikes” - on the importance of cultural heritage:

“We are literally surrounded by tangible cultural heritage (almost like a "stage setting"). It serves as a source of inspiration for us: what is the relevance and application NOW of the (static) heritage from BEFORE? The question is "what can you DO with it to make it "alive"?". The challenge is to not only to preserve it, but also to give some kind of relevance to it. To make things more visible beyond the "Golden Age" and not just focus on ONE period or ONE element | icon | stereotype, but to see connections and go to MORE places - also the not-so-obvious ones - to see the whole picture/story)".

When they are asked for the core values of the city, they don’t hesitate: “It is a beautiful city with so many "layers" and time periods. It's USPs are its ambience, its distant location - you have to organize yourself, create and do it yourself - and its status as capital of the province. It is NOT just a small city in the Randstad, but a city in its own with has exactly ENOUGH facilities”. They add – true to their wider perspective on things – that also the setting of Middelburg within Walcheren and - even broader – within Zeeland plays an important part: “Middelburg has a favorable climate (wind and sun) and it has beach and nature”. 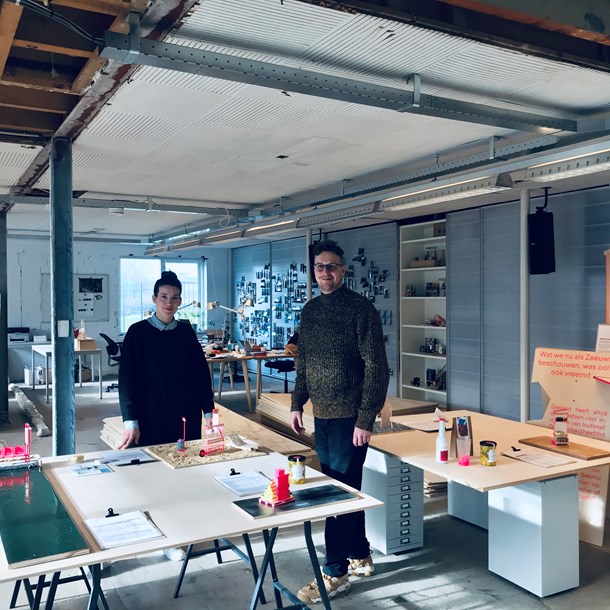 And in the end, it all comes together, because parallel to what de gemeente Middelburg is creating within the Cupido-project… “have we been contracted by the Province of Zeeland in combination with Erfgoed Zeeland to convert their "heritage storylines" into innovative food-related products and as we work and live in this setting of heritage, it's a constant source of inspiration and it gives us new ideas and perspectives. Erfgoed Zeeland doesn't work with the traditional approach (time periods and/or places), but focuses on themes”.

And what would – according to them – be THE thing to improve for the future? Their advice is twofold: “to attract more like-minded people with enthusiasm | energy | time to create new opportunities without losing sight of the history and with a new perspective and to give room for experiment and to think out of the box”.

They see a clear parallel between the “souvenirs” they’re designing right now for the province and what they could do for Middelburg in the future: “Applying our already gathered knowledge of cultural heritage and our newcomer’s perspective to create tangible and storyline-based products/designs. A welcoming first step would be to present our work for the province as a source of inspiration of what our added value could be for Middelburg!”.