Centre of Excellence bringing the story about Middelburg to life

After doing a DNA mapping of the region to identify the cultural DNA - the cultural and historical offers and core values of Middelburg. This was targeted in an online inspirational session with multiple stakeholders to draw out storylines about the city and its offerings. It all boiled down to three storylines that will be used when shaping the content of the Centres of Excellence and telling the story of Middelburg.

These storylines will be further developed but with a lot of the groundwork done it is now time to shape and fill the two centres with content.

- We hope that the physical Centre of Excellence will be ready in June and then we will keep working with the virtual centre and aim to have it up and running after the summer, says Jack. 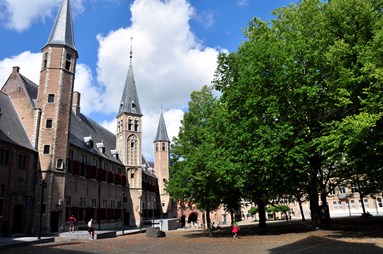 already host a tourist information office and a book shop. With over 600 000 visitors in the building each year the location is ideal for a Centre of Excellence that strives to bring forth all the offerings in the city. But the centre will not only be a place of storytelling and information, it will also work to strengthen the businesses in the city by connecting the cultural sector with other businesses that are struggling due to the pandemic i.e. cafés and restaurants. By cooperating both sectors can benefit.

- And in times of Covid when no galleries are open, and no concerts can be held, we can see the need to find other ways to experience and display culture, he continues.

As summer comes and the two Centre of Excellence comes in place Jack can also see how the two centres will correlate and help to bring out the story, look, and feel of Middelburg even for visitors at the virtual centre.

- Many visits start online today with research and bookings, having the virtual centre to give the same look and feel as the physical one we hope that the real experience of visiting Middelburg can start online and attract people to also visit in person, he finishes.