Since the release of Braveheart, Harry Potter and The Lord of the Rings, ‘set jetting’ has become an international tourism phenomenon. What inspires film viewers to travel to a place that they have seen on screen? What defines the drawing power of a filming location and how does it influence a film’s commercial success and the travel experience? Focussing on urban film tourism, this panel addressed these and other questions regarding location choice, place branding, destination marketing, travel motivation and on-screen authenticity. The process of film tourism has been examined from a theoretical and practical standpoint by PhD candidate Juliette Irretier. 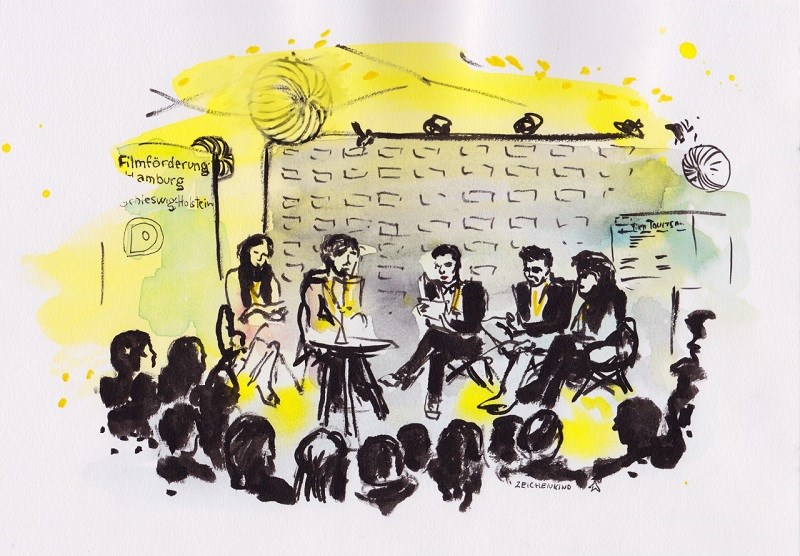 Create Converge helped Juliette to find the right speakers and did promotional work for the event. Here’s a great report by Juliette Irretier herself.

n September 2019, Juliette Irretier – PhD candidate in Film & TV Studies and Interdisciplinary Studies at the University of Glasgow – travelled to Filmfest Hamburg to chair its first ever panel on Film Tourism. Here she reflects on the experience, and the role that ‘set jetting’ can play in building, and even distorting, a sense of place.

What inspires film viewers to travel to a place that they have seen on screen? What defines the drawing power of a filming location and how does it influence filmmaking and audience response? A panel discussion held at FILMFEST HAMBURG on 29 September 2019 addressed these and other questions relating to film tourism.

Since the release of Harry Potter and The Lord of the Rings in 2001, ‘set jetting’ has become an international tourism phenomenon. Whilst film festivals offer an international platform for lively discussions and networking, I had noticed that it is uncommon to include academic research in film industry knowledge exchange (and, indeed, vice versa). To bridge this gap between scholarly research and the creative industries, I had the idea of organising and chairing an international panel discussion, bringing together professionals from the film and tourism industries, whose experiences tie in with my interdisciplinary research on film tourism. I contacted freelance set jetter and travel blogger Andrea David (Filmtourismus.de), film commissioners Rosie Ellison (Film Edinburgh) and Anna-Katharina Preuß (Film Fund Hamburg Schleswig-Holstein), and film tour operator Kai Hillmann (Entertain Tours), all of whom agreed to take part as panellists.

‘Film tourists see more,’ Andrea David writes in her blog post on ‘6 good reasons to be a film tourist’. I open the panel discussion by asking her what this statement means and she explains that, when film tourists travel to a location, they do not just see a landscape, a street or a building. They see the Stormlands from Game of Thrones in Northern Ireland or the island from Jurassic Park when visiting Hawaii; on Princes Street in Edinburgh, they see the Trainspotting characters Renton and Spud run from security guards to the sound of Iggy Pop’s Lust for Life; to film tourists, the Mountain Lake Lodge in Virginia will always be the holiday resort where Johnny met his Baby in Dirty Dancing. Through the emotional involvement with a film or a TV series, visits to filming locations create a heightened experience of place, providing film fans with a particular form of geographical truth.

The tourist gaze and imagination are essential to the study of film tourism, which, over the past 30 years, has developed into an international phenomenon and a substantial area of academic research. Despite its sustained contribution to regional and national economies, film tourism is not yet widely known as the influential and far-reaching travel practice that it has become. It had never been debated at FILMFEST HAMBURG, and the panel discussion quickly revealed the complexity of this topic, detailing the benefits of film tourism for filmmaking and destination marketing but also the challenges that this multi-faceted form of travel entails.

Film tourism is most successful as a result of movie franchises like Harry Potter, The Lord of the Rings or Star Wars; TV series including Friends, Game of Thrones, Babylon Berlin and Outlander; or films that gained cult status such as The Sound of Music, Braveheart and Trainspotting. The profound effect of film-induced travel on tourism sites can be observed, for instance, at Doune Castle in central Scotland. Owing to the castle’s appearance in major films and TV series, visitor numbers have risen exponentially since 2015 and doubled in the past ten years.

Before a filming location becomes a destination for tourists, it provides the setting for a story and is chosen by filmmakers because of specific place attributes. In the process of film production, however, the aesthetic endeavour of directors and producers can clash with the reality of a location for practical reasons, as Rosie Ellison and Anna-Katharina Preuß confirm. For financial, legal or security reasons, film productions can be forced to give up their preferred location and move elsewhere. These so-called ‘runaway productions’ can mislead film tourists in their search for screen-induced authenticity; one of the most recent examples is Outlander, the fourth season of which is set in North America but has been shot entirely in Scotland. This displacement is just one aspect which serves to comprehend the cause-effect relationship between the moving image and the moving people.

Understanding the factors that push and pull tourists to specific locations has been the objective of numerous studies and can help filmmakers and film commissions in their choice of filming locations, enhancing a film’s commercial success and attracting tourism to certain sights and regions. For instance, many of the places presented in T2 Trainspotting invoke a feeling of nostalgia in the viewer and are therefore a guarantor for popularity among visitors, following the hype that its predecessor generated in the late 1990s. The city of Edinburgh acknowledged this film-induced drawing power through a marketing campaign under the hashtag #ChooseEdinburgh.

For many service providers in the tourism and heritage industries, however, it can be difficult to open up the film tourist’s mind to experiences and matters beyond the screen. ‘We get many requests from tourists,’ Kai Hillmann reports, ‘who want to fly to Philadelphia not to discover the city but just to emulate that famous scene from Rocky, standing at the top of those steps with their fists up in the air.’ This disparity between reality and fiction might be fascinating and fruitful for academic research, but it poses a major challenge to film and tourism stakeholders.

Overall, the panel discussion demonstrated the various ways in which film tourism enables engagement and identification with place. As yet, the cooperation among researchers, film commissions, filmmakers and tourism managers is a fragile construct: it remains to be seen how collaborative professional practices will develop around film tourism in the future.

About the Author
Juliette Irretier is a PhD candidate in Film & TV Studies and Interdisciplinary Studies at the University of Glasgow, where she started her research in October 2018. She was educated in German and English Philology at the Georg-August-Universität Göttingen, Germany, before completing an MA in Digital Culture and Society at King’s College London. She has since worked in event management, text editing and at film festivals in Germany and Scotland. Her doctoral studies focus on the influence of political developments within Europe on screen-induced travel from Germany to Scotland, analysing the portrayal of national identity in popular films and TV series.

Event Partners & Support
The panel discussion was informed by Juliette’s interdisciplinary research on film tourism and forms part of her research-related industry and public-facing activities. It was hosted by FILMFEST HAMBURG and organised in cooperation with the Film Fund Hamburg Schleswig-Holstein and the Interreg project Create Converge.

The event was supported by the University of Glasgow’s College of Arts through a Research Support Award and by the School of Culture & Creative Arts as part of its 2018-19 season on the theme ‘Inclusive/Exclusive’.

Juliette’s PhD is funded by the Scottish Graduate School for Arts & Humanities through an AHRC Doctoral Training Partnership Studentship and by the University of Glasgow’s College of Arts through a Postgraduate Scholarship.