How can serious gaming raise awareness for climate adaptation?

The pilot of the city of Zwolle aims to raise awareness and inspire climate adaptive community building by residents through serious gaming. Therefore two serious games have been developed, the first being a mobile escape room, the second a serious game named the ‘Garden Battle’.

Climate Escape Room
Residents in two neighbourhoods are invited to enter a mobile Climate Escape Room ’Adapt or BTrapped’. Here they step into a future (2050), which is impacted by climate change. Players can escape the room by solving puzzles with climate change adaptation as the solution. After the escape the residents were invited to join a city dialogue in the form of an evaluation of the game and the residents’ experiences of climate adaptation and solutions they recognize in their own garden/street/neighborhood. We also develop the street challenge wich could not be tested due Covid. The goal of the street challenge is to develop a plan to transform their own neighbourhood into a green sponge. The best plan wins resources to help execute the plan. The ultimate goal however is community building to develop the water sensitive city. Therefore, the pilot focuses on the lessons learned in order to apply them to Zwolle’s climate adaptation strategy. The project is co-financed by NSR

Click on the picture to start a film showing how the prototype of the Climate Escape Room is being tested. 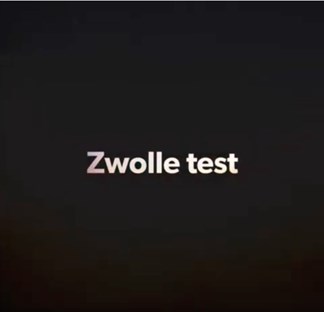 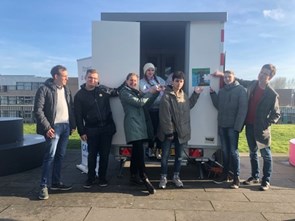 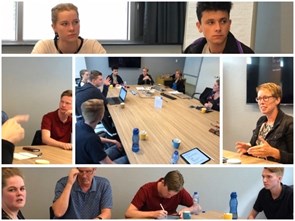 (In the photo collage the student team is discussing how to house the climate escape room. In the middle row to the right is product owner Annemiek Wiegman, from the municipality of Zwolle and member of the CATCH team. In the bottom picture left is CATCH project manager Renate Postma also from the municipality and on her right Bertrand Wegenaar from 038Games.) 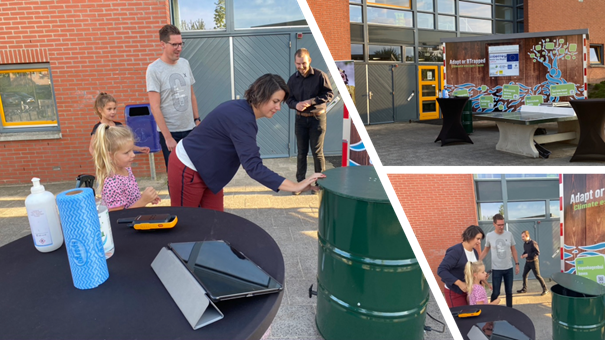 (In the photo residents and the climate escape room.)

Community building for a water sensitive city
Zwolle is currently developing a long-term climate adaptation strategy on city level. A strategy that integrates measures at all levels (from rivers to rain barrels). Zwolle sees community building as one of the measures and an important one for becoming a water sensitive city. Zwolle’s CATCH team therefore expects that the outcome of the pilot and the lessons learned will help finalize the city’s climate adaptation strategy and result in its successful execution. Moreover, the pilot’s outcome will provide valuable input for the Catch dashboard (Decision Support Tool).

A second serious game that Zwolle was eager to develop was a sort of SIM City game, set in Zwolle’s digital twin city. Residents are challenged to make their own gardens, neighborhoods and cities more green and give water more space. The design started in the second half of 2020, after game builder Grendel Games won the tender for this assignment. After months of development together with a test group of stakeholders in the Climate Campus network, the pilot started in March 2021 with the first prototype of the game.

After the pilot the 2.0 version of the Garden Battle was launched. Residents of Wipstrik and Stadshagen were able to sign up for the game. At the end of April 2021, additional possibilities were added to the game, such as creating a design for a neighborhood square or other parts of public space. Beautiful prizes (made available by entrepreneurs from the Climate Campus network) were to be won. In June 2021 the award ceremony followed and 7 price winners were announced. After this event the Garden Battle was opened to the whole city, all residents could play the game during the month of June. 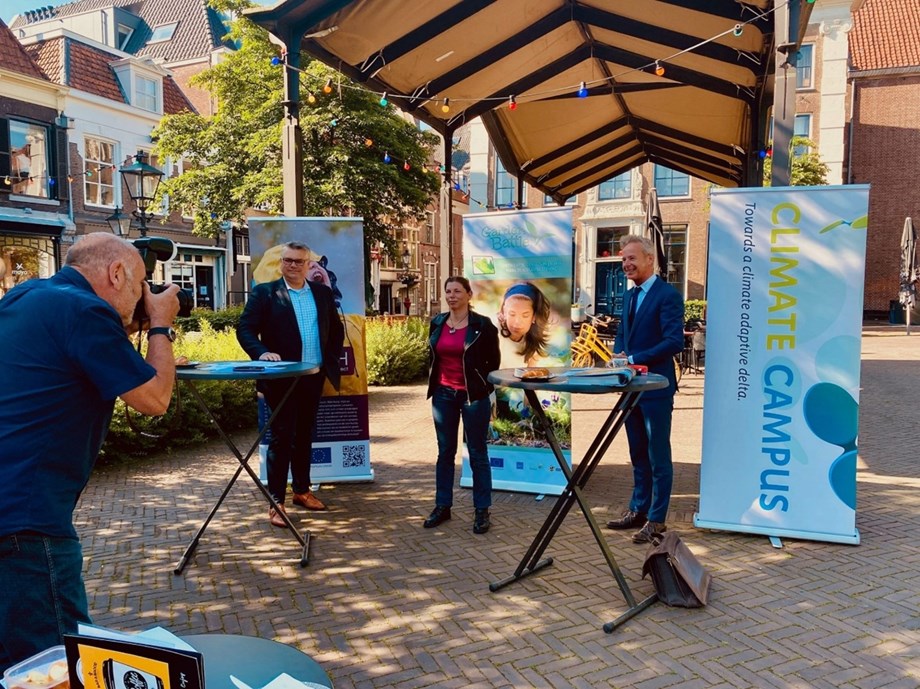 (In this photo the award ceremony.)

When residents play the game, they are triggered to solve all kinds of problems around the extreme weather conditions in their street, just like in the escape room. The mission in the game is to maximize the sponge effect of their habitat - their home, garden, street and neighbourhood. By sponging up their neighbourhood, residents also ensure that sufficient water and cooling options become available in times of heat and drought. As a resident, you thereby depend on your neighbours. To score high in the contest for the design for a neighbourhood square or other parts of public space you have to collect likes on Social Media.

Citizen Science
A special wish of  the Garden Battle is that the design includes how the input of residents during the game can "feed" the digital twin city with relevant data. Can we design the game in such a way that residents measure and enter their own data in the virtual city? That can be anything, nitrogen in the air, height of thresholds and ridge heights of roofs, the amount of water in cellars and on the street, etc. With this form of Citizen Science, a more complete picture of Zwolle can be created so that more effective policy can be developed. This serious game can therefore be very relevant for the future, also for other municipalities and governments. In this first version of the Garden Battle and this Campaign we collected data on the designs of the residents gardens at the start of the game, the changes at the end of the Campaign and their climate adaptive dream garden.

Research into effectiveness of the games

At this point also scientific research was conducted on the effects of this serious game. The results are expected in the course of 2022. The evaluation of these serious games was conducted in collaboration with an environmental psychologist at the University of Groningen. In 2020 she did research on the effectiveness of the mobile Climate escape room and last year on the Garden Battle. Her draft report has been received by the Catch project team.

In both cases, some preliminary insights about the effect of the interventions could be learned from the results. It was possible to compare players and participants from a control group that did not participate in a serious game, on the 12 questions on climate change, risk perception, and climate change adaptation. The players of the game generally scored higher on all items in the survey compared to the control group, consisting of members of the general public, who did not participate in a game. More of the ‘players’ agreed that climate change would have negative consequences, that it would occur locally, and that they are worried about climate change. The ‘players’ perceived a higher likelihood and severity of the risks of extreme weather. The ‘players’ also generally indicated that they perceived measures to adapt to climate change as more effective, that they saw themselves as more capable of implementing these measures, and that they possessed the required knowledge to implement these measures. Lastly, they were also more motivated to take measures to adapt to climate change. 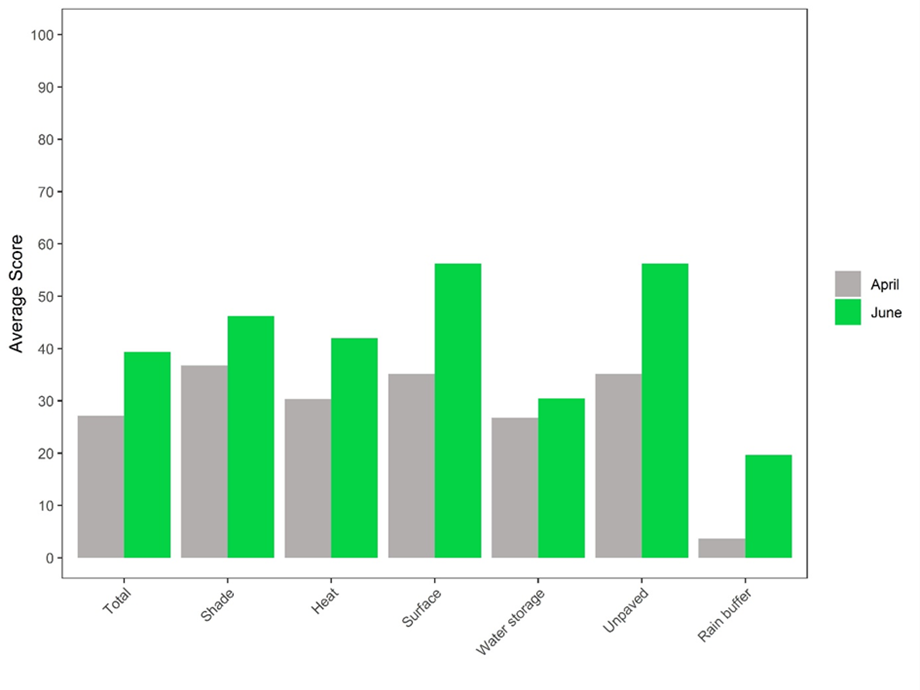 In order to examine whether there are statistically significant differences on any questionnaire scores before and after people participate in an intervention, it is necessary that a relatively large group of people complete the evaluation.

Collaboration with Climate Campus
The development of the Climate Escape Room Adapt or BTrapped is supported by Climate Campus, a network of governmental organisations, education and research institutes, entrepreneurs and social organisations. The partners in the network collaborate in innovative ways to develop a water sensitive region. This is the delta of the rivers IJssel and Vecht, an area that comprises almost all water challenges of the Netherlands as a whole. Through innovative collaboration Climate Campus aims to accelerate climate adaptation and simultaneously further other social issues and stimulate new economy as well.

Community building for a water sensitive city
Zwolle developed a long-term climate adaptation strategy on city level. A strategy that integrates measures at all levels (from rivers to rain barrels). Zwolle sees community building as one of the measures and an important one for becoming a water sensitive city. Zwolle’s CATCH team therefore expects that the outcome of the pilot and the lessons learned will help improve the city’s climate adaptation strategy and result in its successful execution. Moreover, the pilot’s outcome did provide valuable input for the Catch dashboard (Decision Support Tool). We made the Climate stress test of the Zwolle Adaptation Strategy (ZAS) also available in English.

In July 2019, the city of Zwolle presented its long term climate Adaptation Strategy (ZAS). Building on the ‘monitoring and navigation’ component of the ZAS, Zwolle is planning to monitor and evaluate its climate adaptation goals.

‘Monitoring and evaluation’ is the sixth step in the planning cycle for climate adaptation (CATCH, Climate-ADAPT, consistent with ISO 14090). Recently a step-by-step approach and the contours for a customized monitoring strategy have been presented. The CATCH decision support tool is mainly used by Zwolle for self-assessment. Zwolle needs customization that matches its own climate adaptation goals. While the self-assessment in CATCH is based on indicators in the three Water-Sensitive City pillars, Zwolle seeks to have indicators which connect with its five climate adaptation goals. These five goals are formulated in the Zwolle Adaptation Strategy (ZAS, 2019), the city’s Vision on Spatial Planning and the Environment (2020) and in the 'plan of action' to build the Climate-Resilient Growth Region Zwolle (2021).

The proposed step-by-step approach for developing, applying and organizing the monitoring of the Zwolle climate adaptation goals consists of the steps that have already been taken (incl. CATCH) and a proposal for next steps. These next steps include the elaboration of the monitoring strategy, its application (instrument and protocol) and the administrative and organizational safeguarding, under the leadership of the municipality of Zwolle. The climate adaptation goals relevant to Zwolle are usually of a strategic nature. The translation of the strategic (qualitative) goals into operational (quantitative) goals has been proposed as an intermediate step. This way it is possible to become more concrete with regard to the indicators to be applied and the possible mutual hierarchy and differentiation to be applied, both in terms of objectives and spatial scales (neighbourhood, city and region).

The protocol of the monitoring process aims for: (a) consistency in diagnostic application, e.g. comparing different years, (b) reliable valuation/scoring indicators, (c) independence and accountability. The CATCH decision support tool does not provide a monitoring process or protocol yet. When scoring strategic (qualitative) indicators, like the CATCH self-assessment tool, this is overcome by involving (10+) participants with sufficient diversity (backgrounds) in the monitoring process. In addition, the supervision is preferably provided by two external and independent facilitators (outside the municipal organization). These facilitators are preferably accredited, based on different type of indicators (strategic and operational). The monitoring process is supported by a checklist. When focusing on operational indicators, the protocol may be less extensive. In that case, an instrument could suffice, while a method must be agreed upon when valuing/scoring strategic goals. It should be considered to appoint one or two (independent) observers. 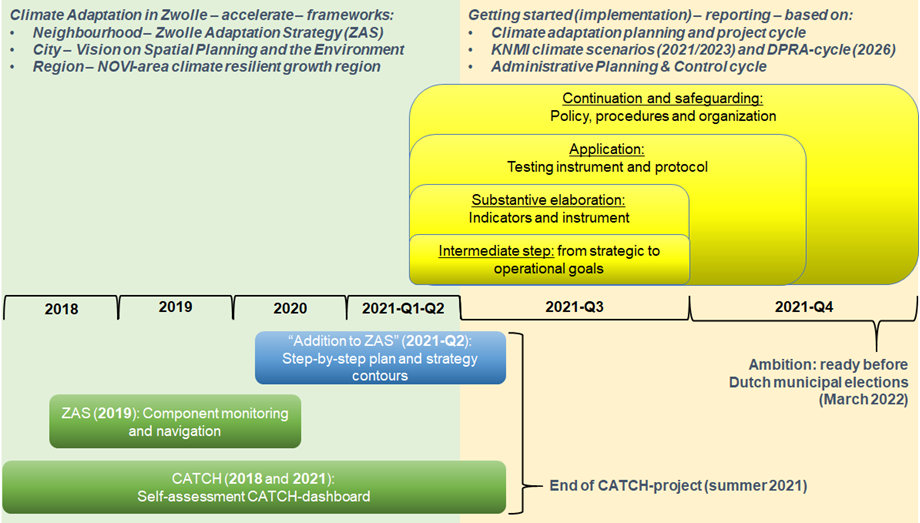 Learn more
If you wish to learn more about the community building project in Zwolle, please contact us. You can also visit the pilot project webpages: