29 January 2018 - Published by Manon van de Riet
January 22 up till and 24 January, the DST-team visited CATCH partners at the municipalities of Enschede and Zwolle. In close cooperation with its partners, the members of the DST-team are developing a strategic tool for cities, to implement climate adaption in their strategic visions. The strategic tool is called the ‘Decision Support Tool’. The DST-team consists of delegates from the University of Twente, Jade University of Applied Sciences, Royal HaskoningDHV and Vechtstromen. During the visits interviews were scheduled and partners have taken the team on several excursions.

Partners and their stakeholders – such as members of public authorities and consultants –  were interviewed about goal ambitions in relation to climate adaption, measures they have already taken, used strategies and instruments, what they need in general, what they need from the DST-tool etc. It has given the team insight into different working methods and ways of thinking. The collected information and impressions will be used for the development of the Decision Support Tool.

The project manager of the municipality Zwolle who works on the implementation of climate adaptation within the city has shown the DST-team some projects which are in process or have been finished. For example the train station. He actively played a role to implement climate adaptation measures within the renewed station. In Enschede a project leader of its municipality has taken the DST-team to the project ‘Stadsbeek’. He has shown the measures that have already been taken and the measures that are planned.  At both municipalities a combination of consultation with other authorities, businesses and residents accompanied by the necessary knowledge appears to be important factors for implementing climate adaptive measures.

The visits were very well coordinated by the partners. That’s greatly appreciated. In the coming months the interviews and excursions will take place at the other partners. The DST-team hopes to gather such valuable information as they have collected the past few days. 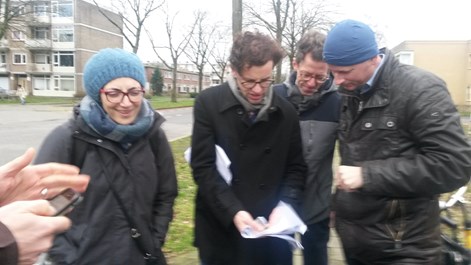 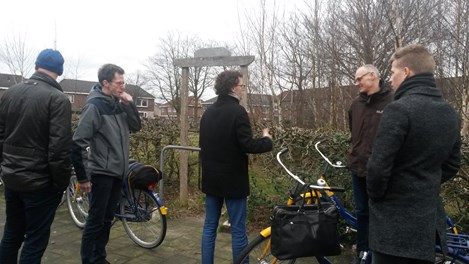