14 June 2018 - Published by Manon van de Riet
Compliments for our film about the CATCH project! From all competitors in the NSR video contest we were voted as the runner-up!

For this competition we sent in a shorter version of the video we already made for the introduction of our partnership.

At the opening dinner of annual North Sea Region Conference, the award was received by the chairman of the steering group of the CATCH project, Jan van Hoek.

‘This is wonderful for the CATCH project and it’s partners. We are working to accelerate climate change adaptation in small and mid-size cities. These cities really deserve the attention as they face large challenges. And an award like this helps to make their challenges visible’ 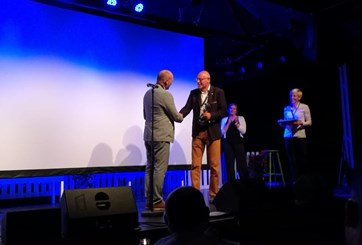 The focus of the competition was to make a video that tells about the difference that the project will make for the region, for people and for organisations in a way that is understandable for aunts and neighbours.