CATCH project presented at Our Future Water conference in Berlin

21 November 2018 - Published by Manon van de Riet
On November 7th the Our Future Water conference was held by Robert C. Brears, as part of the Berlin Science Week. This conference brought together close to 40 practitioners from governmental, business and research institutes in Europe to address water security goals. On behalf of CATCH, our leading expert Nanco Dolman spoke on ‘Applying the Water Sensitive City framework for climate adaptation in the North Sea Region’.

After the conference Nanco was interviewed by Deutsche Welle Television, in which he promoted the important role of Catch in changing our view of water in achieving climate resilience. 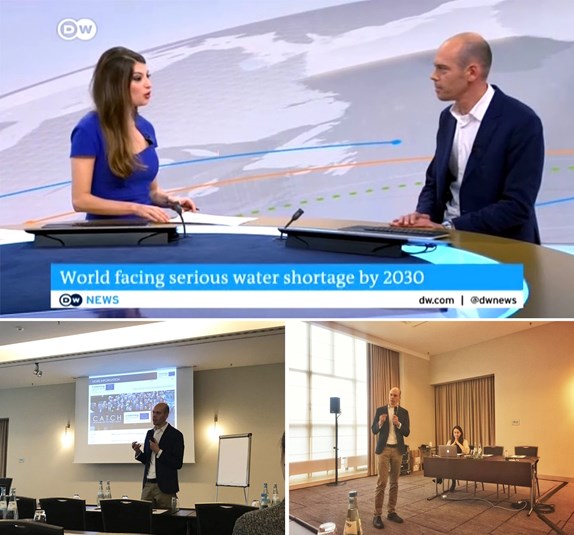 Although CATCH stands for ‘water sensitive Cities: the Answer To CHallenges of extreme weather events’, cities in the North Sea Region (NSR) mainly focus on dealing with too much of water and floods. Prolonged heat and dryness during recent 2018 summer led to drought in many countries across Europe, including the NSR. This is an instant wake-up call for cities in the NSR which must also consider adaptation to more severe droughts and water scarcity.

Main objective of the CATCH project is accelerating cities to become more water sensitive. With regards to water security in a changing climate, we need to change our view of water use. This means the redesign of urban water management in midsize cities in the NSR from a ‘water supply city’ to ‘water cycle city’, in which cities are considered as water catchments and promote self-sufficiency. Currently the CATCH pilot projects in the NSR are lacking ‘cities as water catchments’ practices with regards to sustainable water resource management. Cities have historically heavily invested in single-purpose systems, and consequently the maintenance and upkeep of these systems. Besides the price of (potable) water is low.

In the CATCH-project a step-by-step approach has been proposed in three ‘Waterway City’ sub-states: (a) follows infrastructural network – adaptive, (b) co-organizing in urban network, and (c) retro-fit natural network – regenerative. Taking this longer run, “leapfrogging” towards greater water sensitivity through the provision of multifunctional and multi-purpose water infrastructure could be possible. Additionally, the sustainable water usage and water sensitive city transition in NSR can be promoted in coherence with other transitions, like energy and circularity.

More information and video messages on Our future water Berlin