08 March 2019 - Published by Harry Mach
After a delay caused by last summer’s exceptionally dry weather , the water level has slowly been raised closer to a natural level, and the seeding of sphagnum which will colonise this bog and return it to a more natural state has begun.

After a delay caused by last summer’s exceptionally dry weather , the water level has slowly been raised closer to a natural level, and the spreading of sphagnum moss which will colonise this bog and return it to a more natural state has begun.

We reported in September that the first work had begun at Lille Vildmose under the CANAPE project . The work in September consisted of removing the topsoil from the site to prepare it for rewetting and the spreading of sphagnum moss.

The bare earth of the site is not able to effectively store carbon, and may still be a carbon source. Therefore the next step is to try and promote the growth of sphagnum moss, by covering the area with plants taken from donor sites.  This restoration will expand the area of bog habitats in Lille Vildmose, and allow for larger areas of habitat to be joined up, supporting birds such as the Common Crane, and plants such as Sundews.

The first challenge is getting the material to the site. As the site is now largely inundated with water, the ground is too soft for regular vehicles. Fortunately, the team have come up with a workaround, consisting of a sledge towed by a digger. 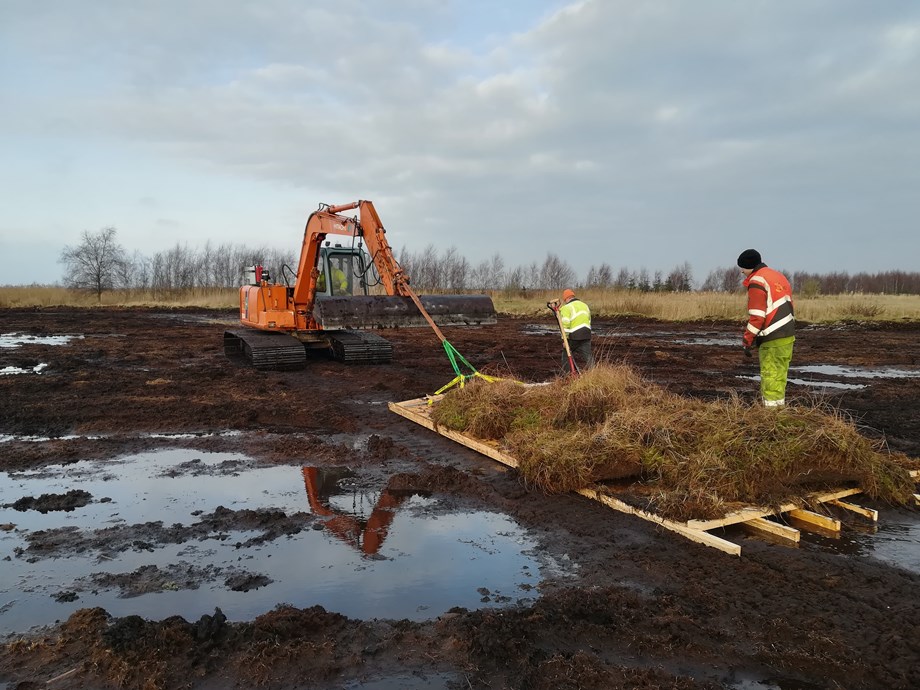 As soon as the sphagnum material is spread out, it will hopefully take hold and develop into a near natural sphagnum bog. One aspect of this restoration that will help ensure the resilience of the site is the unevenness of the soil. This has been deliberately created to ensure that even if the water level varies, part of the site will be near optimal conditions for sphagnum growth. The ambition is for overtime the site to be a mixture of healthy plant life, with pools of water scattered between it.