16 April 2019 - Published by Harry Mach
After much anticipation, the Biochar Burner has arrived in the Broads for the first production of charcoal. As an initial test, the team converted waste willow and alder form wet woodland coppicing into approximately 150kg of charcoal over two days.

Our Biochar Burner is an Exeter Retort. It can be moved from site to site, as it is small enough to be mounted on a trailer. CANAPE will use the machine to test the possibility of marketing wet woodland charcoal from a variety of sites in the Broads and surrounding areas.  The product is being marketed via a wholesaler and through direct sales as a local, sustainable and high quality pure product with no additives.

Partners will build up a stock with the first trials with consumers beginning in June. We expect to be able to produce approximately 100kg per burn fully loaded.

The production of biochar from wetland reed will also be tested. When added to soil the biochar benefit sandy or drought-prone soils or heavy clay or waterlogged soils. It works to store fertiliser and water.

The retort consists of two cylindrical chambers, one inside the other. Wood is loaded into the inner chamber, which is then sealed. A fire lit at the bottom of the outer chamber then heats the sealed chamber. 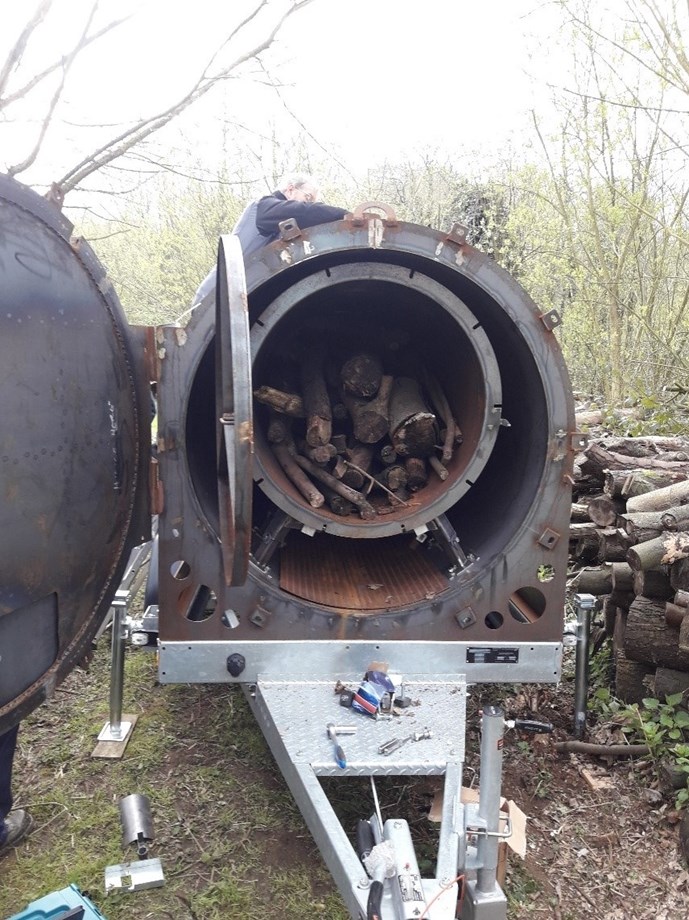 Above - retort loaded with wood ready to be converted to Charcoal

The heat causes the wood to release moisture as steam. Once it is completely dry, the pyrolysis process will begin. Pyrolysis is the conversion of wood (or other organic material) to charcoal, by heating it in an oxygen free atmosphere.

As the wood pyrolysises, it releases syngas, which is directed back to the fire beneath the chamber. There it ignites, and provides heat for the completion of the process. Once all the wood has converted to charcoal, the release of syngas stops. At this point, the machine is shut down. Once it has cooled, the charcoal is unloaded.

It may seem counterintuitive that by burning wood and gas we are combating climate change. However, the project is low-carbon as;

The charcoal we sell is also displacing charcoal that is imported from distant countries (such as Indonesia and Nigeria) , and often produced from tropical woods that are not always sustainably managed. It is also often produced in environmentally damaging kilns that are not capable for reusing greenhouse gases produced by the process, so are polluting the air.  Whereas our retort uses the syngas produced to provide heat for the pryrolysis. 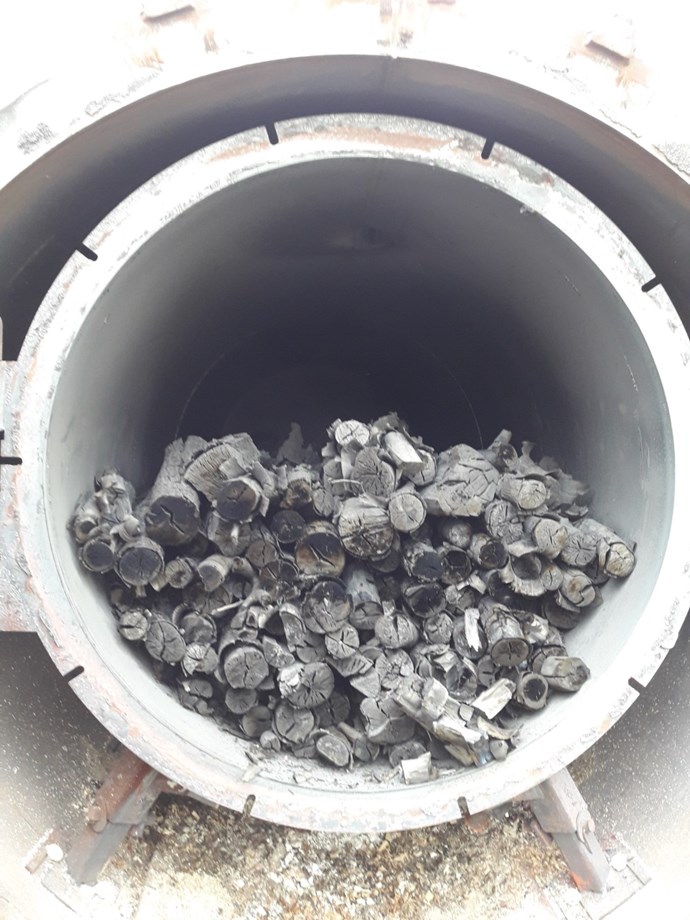 Charcoal Ready to be unloaded from the burner.