CANAPE: Biochar to save a historic tree

27 August 2020 - Published by Harry Mach
William Kett was without doubt an impressive orator. When in 1549 a riotous mob arrived on his doorstep, he not only persuaded them not to burn down his house, but also persuaded them to apoint him their leader. Gathering the rioters turned rebels at an Oak Tree, he massed his forces and marched on the city of Norwich.

You can read the full history of the ill-fated rebellion about here. The Oak Tree they assembled at, which came to be known as Kett’s Oak, still stands just outside the village of Hethersett. Caring for this historic tree is a big responsibility, as Kett’s rebellion is a key part of the cultural heritage of the county. The tree is also listed as one of the 50 "Great British Trees."

However, as with many old oaks, sickness and illness is a problem, and keeping the tree healthy is a challenge.

Recently the silviculture world has been investigating the possibilities of using biochar (finely ground charcoal) to support tree health. Mixing biochar into the topsoil around established and newly planted trees has been shown to improve their health and survivability.

The fine charcoal increases the capacity of the soil to store water, and increases nutrient uptake by the trees roots. 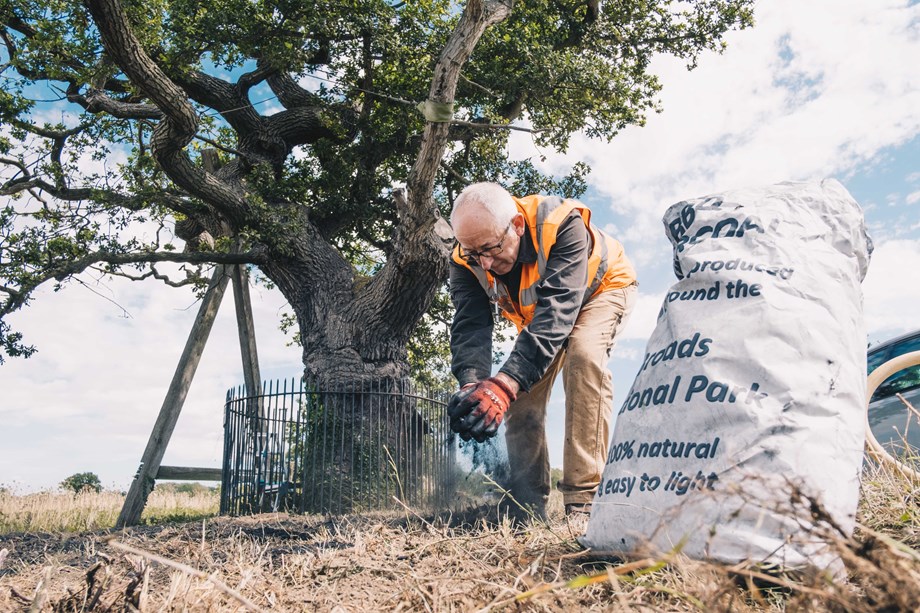 Preparing the charcoal infront of the tree

To try and improve the health of the oak, Norfolk County Council has used Biochar donated by the Broads Authority. Manufactured from waste wood obtained from biodiversity management in the Broads, this has been moslty marketed as a BBQ product.

There is always a collection of dust at the bottom of the burner which is not suitable for cooking.  This therefore another product that can be made from the charcoal burner that we have previously described here.

Not only does Biochar help trees, it has potential to be a carbon negative (rather than merely neutral) product. Dead wood slowly releases the Carbon that the trees have absorbed from the atmosphere as Carbon Dioxide. Converting the wood to biochar and then burying it stabilises the carbon, keeping it out of the atmosphere and creating a long term underground carbon store.