Hickling Broad is the largest Broad in the Broads Network. The Broads are a series of shallow lakes linked by a network of rivers, largely formed by the flooding of peat cutting areas in medieval times. It has an area of 600ha, but for most of its area is less than a meter deep.

Like many areas in the Broads, erosion has led to large amounts of sludgy sediment gathering at the bottom of the broad, acting as a barrier to navigation. Through the CANAPE project the Broads Authority will remove this sludge and construct a new 1ha area of reedbed in Chara Bay. This work began in the autumn 2018 and will be completed in the autumn 2021, and will support a long term vision to improve Hickling Broad for recreational use and for wildlife. For more information about work at Hickling, see our video chat setting out what we have done and why here.

Literally meaning "border park" the Grenspark is a famous area on the Dutch/Belgium border considered to be of outstanding beauty. Within the park lies the old peat area "De Nol" where in the past peat was cut and transported by canal to the nearby towns.

Through CANAPE the partners will aim to raise the water level in the Nol by constructing a an impermeable barrier to reduce water outflow. This will work towards partly restoring 60ha of peat bog, allowing it to more effectively store water and carbon. Work will also be done to explore the potential of using moor grasses from the rewetted area to sell as a potential economic product. The delivery of this pilot will be completed by the end of 2022.

Carbon saved - 600 tons per year - equivalent to driving an average new car 5 million kilometres, or the amount stored by  285 football pitches worth of forest.

Located in the Northern Netherlands and with an area of over 2,000ha, Zuidlaardermeer is a beautiful place, with long banks of reed hosting thousands of birds, including a White Tailed Eagle. Water management of the lake is the responsibility of CANAPE partner Waterschap Hunze en Aa's.

Through CANAPE we will be modelling the relationship between current nutrient inputs and the water quality in the lake, and seeking to enhance the water quality by creating an extra 20ha of reedbed along its banks. Work will also be carried out with land owners in the local area to develop a "peatland vision" for a longer term sustainable use of the catchment around Zuidlaardermeer, improving the overall health of the local ecosystems.

Lake De Leijen is found on the Opeinder Canal in Friesland. Created by peat extraction, the lake is now an important site for nature and recreation. Through CANAPE  Van Hall Larenstein University of Applied Sciences is working with the local community to build a better model for the water quality of the lake, leading to a better understanding of the PC Lake model. This "citizen Science" approach of engagement with the local fishing community allows for better data collection, and for data collection that is not possible or economical working only with professional researchers. For more information on the Citizen Science aspect of the project, please visit our citizen science page. 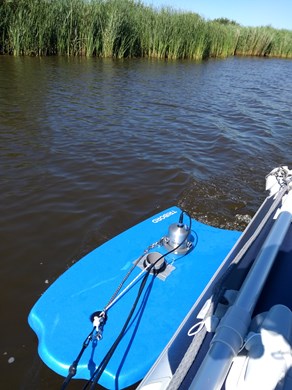 Lake Holter Meer lies within the District of Diepholz, Lower Saxony, and has been a nature reserve since 1942. Its water quality has degraded due to the intensive agriculture in its surroundings. Through CANAPE work will be done to better understand the lake, including how water from the surrounding area enters the lake, and how this impacts on its water quality. Collaborating with Dutch expertise, we have used the PC lake model to understand how best to improve the water quality and support the local water board to improve its water quality. During the first year of study in 2018, it was established that the lake is entirely fed by the surface water in the area, with no other source of water. This year of study also highlighted the problem of extreme weather events, with a drop in the water level of over a metre during the hot and dry summer of 2018. This work will inform the restoration works planned by the Local Water Body in the early 2020s.

The CANAPE Paludiculture Farm at Barver Moor, with a wider rewetting project in the background.

Located within the nature reserve of Mittleres Wietingsmoor in Diepholz District, Barver Moor will is our test beds Sphagnum Moss Farming on the Dark peats of the district.

The site has undergone a hydrological and soil survey as part of CANAPE preperations, establishing that before our work began it has a layer of peat between 20cm and 160cm. Compared this recent survey, a peatmap of the site from 1997 shows that there has been subsidence of 30-50cm on the site. This suggests a rate of 1.5-2.5cm per year, and release of a substantial amount of CO2 during this period.

Now the polder is constructed and the water level raised on our Sphagnum Farm, we hope to have reversed this process, and to have begun accumulating peat agian.

We have two objectives for the site, firstly to halt further degradation of the peat soil on the site, and prevent further subsidence. With only 20cm of peat on parts of the site if fully drained and used for normal agriculture there would be a potential for this to degrade to nothing within a decade, severely reducing the economic value of the area to agriculture. Secondly by spreading and harvesting sphagnum moss we can create an economic use for the land that will be sustainable into the future.

For more information on this site, see our news article here and our video chat here.

Carbon Saved - 127.5t per year - equivalent to driving an average new car 1 million kilometres or  53 football pitches worth of forest 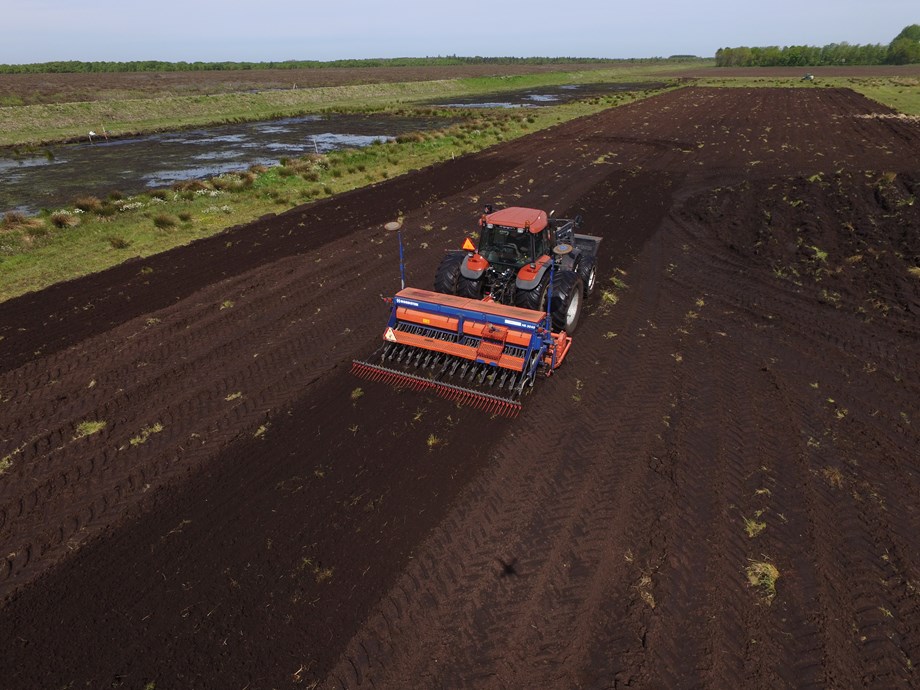 Site works at the Paludiculture farm on Store Vildmose

Store Vildmose is the remains of a large raised bog on northern Jutland, now largely drained for agriculture. It is famous for the "Vildmose Potatoe," however we also know that work needs to be done to ensure that the area has a sustainable future.

In order to design a sustainable future for this area the Danish Nature Agency (Naturstyelsen) is working with the local community to design a vision for the future of this area, and has constructed a Paludiculture pilots in the area. This Paludiculture pilots aim to offer alternatives allowing land to be used to both generate an income for the landowner whilst raising the water levels to prevent degradation of the soil. For the long term work in restoring the area, it is foreseen that Paludiculture style land management will be needed to remove nutrients from the soil before a natural bog could be created.

For more information about this paludiculture farm, visit our page here.

Lille Vildmose is a beautiful stretch of wildmoor in Eastern Denmark, including the larges stretch of intact raised bog in Western Europe. Like all the sites in our project, it is somewhat degraded and we are aiming to reverse this process through rewetting and bog restoration. This will consist of 2 stages of rewetting and spreading sphagnum, starting in 2018.

The first works, which began in the summer of 2018, was to remove the topsoil. This may seem counter intuitive given we want to stop peat removal, however it is a necessary step in peat-land restoration. This is done because the upper layer of soil is contaminated by nitrogen following use as agricultural land. This inhibits the growth of sphagnum moss, which prefers a nutrient poor environment, and would encourage the growth of plants that we do not want to see establish themselves on the restored bog. Further, raising the water level without removing the topsoil has been shown to result in a short term 'spike' in methane emissions.

Start of works at Lille Vildmose

Following the removal of topsoil from the site in August 2018, donor material was added to the site in January 2019, to encourage plant growth to return it to a natural state. For more information on the spreading process, see our news story here.  The second hectare of the sight was worked on in the summer of 2019, and is now developing towards a natural bog.