The case study in Värmland is located to the river Klarälven and its catchment area. The river Klarälven is one of the longest rivers in Northern Europe with its 460 km. The river starts in Norway and flows through Värmland county and ends up in Sweden's largest lake Vänern. Through its central location and its powerfulness, the river has always had a great significance for Värmland. Klarälven has been an important transport route for iron, coal and timber. Klarälven is a popular area for tourism and fishing and is of great importance for the county’s production of hydropower.

In Klarälven there are many hydroelectric power stations and a large dam that regulates the flow in the river. The river flow varies throughout the year and is affected by weather, regulation, measures in the river area. The flow has historically peaked during the spring due to snow melting. A changing climate will affect the flow pattern and it will be a lower flow during spring and a higher flow during autumn and winter. There is a need to know how this will affect different interest areas.

The case study in Värmland
The case study in Värmland is about climate change adaptation in the catchment area of Klarälven. In the study VCAB will investigate the impacts of climate change on the river and work towards an integrated and comprehensive approach that considers multiple risk factors and interests when planning actions around Klarälven.

–  To get a greater knowledge of the impact of climate change on the rivers’ flow and regulation, we are investigating effects on interest areas and whether there is a need for a different regulation strategy of Klarälven, says Elin Ljunggren, project coordinator at VCAB.

A large part in the case study is about involving various stakeholders and collect their knowledge and together create and agree on different weather years and scenarios.

–  With the weather year as basis, we will create models showing the rivers’ behavior, says Elin. Together with a working group of key stakeholders, we will then analyze the results and discuss the impact on different areas of interest.

The effects of measures in the river area are today rarely assessed from an integrated and comprehensive perspective that considers multiple risk factors and interests. This perspective means considering a changing climate and different social interests such as; production of hydropower, flood risk, landslides, erosion, cultural heritage and biodiversity.

–  One goal of the case study is that different stakeholders, such as municipalities and national authorities, will use a comprehensive perspective when discussing and planning which measures are of the greatest benefit for the different areas of interest, says Elin.

The results of the case study are expected to both simplify and streamline the process of climate change adaptation in Klarälven.

Read more about the case study in Värmland 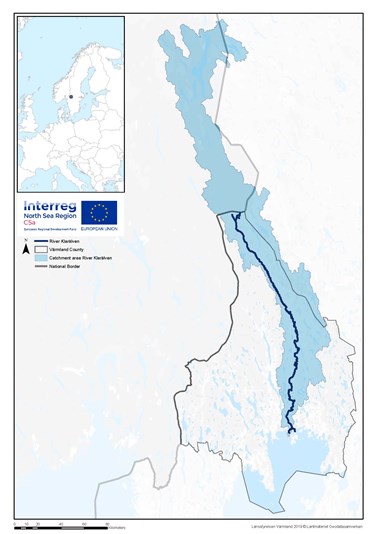