The conventional response to challenges regarding climate change and weather-related events has been to deliver project-based infrastructure responses. It is increasingly recognized that a local ‘defence’ paradigm alone is unable to manage risk whilst continuing to promote liveable cities, ecosystem health and social well-being. A new approach is required that is purposeful, collaborative and takes a whole-system, long term view.

The workshop sought to share information, including emerging science, policy and practice, among all those involved in adapting to climate change and flood risk management.

- Our aim with the workshop was to help address barriers to adaptation by providing practical and innovative solutions based on a holistic understanding of the system, adaptation paths and inclusive decisions, says Paul Sayers, Sayers and Partners.

The workshop ran as a series of presentations followed by an extended interactive discussion to elicit 'how we can deliver adaptation in practice - what are the opportunities and barriers'.
The presentations were drawn from the selected abstracts (including submissions from C5a and Environment Agency pilot programme). the meeting was convened by Paul Sayers with the Panel Co-Chaired by Rijkswaterstaat (Matthijs Boersema) and the Environment Agency (Andrew Eden) supported by representation from the other Risk Management Authorities, Researchers and Consultants. 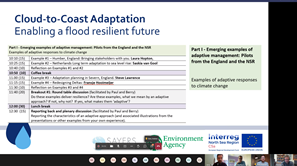 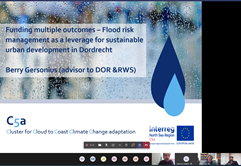 Background
Two-thirds of European citizens are expected to be at particular risk from climate change and weather-related events by the year 2100 (Krona et al., 2019). Countries with significant coastal populations will be particularly affected, including The North Sea Region (NSR), where communities are vulnerable to changes in sea level and added storminess. Inland, increased rainfall intensities and volumes will increase localised fluvial and pluvial flood risks. Estimates of the expected annual damages in Europe by the 2080s from coastal flooding are €17.4 to 25.4 billion (currently €1.9 billion) and from fluvial flooding, €97.9 billion (currently €5.5 billion), unless strong prevention and adaptation policies are implemented (EU, 2014). Vulnerabilities are especially intense for parts of the NSR, such as cities and seaports, which comprise some of the most active global transport and commerce hubs. Hence, flood protection is vital for the NSR, with investments potentially yielding a benefit-cost ratio between 7:1 and 10:1 (World Bank, 2014).