“Going with the flow” for adaptable coastal protection

22 April 2020 - Published by Eric Boessenkool
The coast is a place for sport, recreation, nature, and economic activity. But nature always goes its own way, and the shoreline has not always been where you see it today. Shorelines can retreat great distances due to storms. Man-made barriers to combat coastal erosion have had only limited success, and they are difficult to adapt to the rising sea levels caused by climate change. On the Danish North Sea coast, by working with rather than against nature, the last natural barrier – the littoral dune – can now be protected and even strengthened in a measured way. For the first time in generations, coastal residents and landowners feel properly protected during storm conditions.

Lost to the sea
In communities along the Danish North Sea coast, municipal land records often show historical property boundaries that lie offshore from the current waterline – sometimes by hundreds of meters. According to Per Sørensen, Head of Coastal Research at the Danish Coastal Authority, these old records tell a sad tale of homes, farms and settlements lost over centuries to the sea during severe storms.

Per has dedicated his thirty-year career to studying and understanding the natural processes that define the coast and affect the community, and exploring strategies to cope with them. With sea levels projected to rise significantly due to climate change, his work is crucial to the preservation of the coastal landscape and the way of life in the area.

New approach needed
The mainland of Denmark is a low-lying peninsula that juts out 300 km into the North Sea from northern Germany, and the North Sea coast is a landscape of estuaries, inlets, low cliffs, dunes and long sandy beaches.

“People here have always depended on the wide beach and coastal dunes to protect them from the sea,” explains Per Sørensen. “But the coast here has always been in retreat, causing communities to move further inland in a never-ending cycle.”

The traditional remedy was to build groynes – sand catchers jutting out from the shoreline – to trap and hold some of the eroded sand. Per continues: “From 1874, they brought massive quantities of rock here and placed them perpendicular to the coast, but the erosion has continued all the same. I know a family that has farmed in Krogen for five centuries, and the homestead has had to move further inland twice in that time. Today there is just one row of dunes protecting the settlement from the sea.”

A new approach was called for. Following severe flooding in 1981 due to a breach of the dunes, the coastal municipalities and the Danish state agreed in 1982 to manage coastal protection jointly, with 5-yearly reviews, national funding, and a focus on research. The challenge was: how to protect the dune face from destructive waves?

Working with wind and waves
“From that time on, we have taken a more holistic approach,” says Per Sørensen. “In 1974, the first trials had been conducted with a Nature Based Solution: the use of sand nourishments in the surf zone and on the beach to make the high water shallower during storm surges, so that wave energy is dissipated before it reaches the dune face. This approach was so successful, that since 1992 it has become the primary means of coastal protection on long stretches of the North Sea coast.” 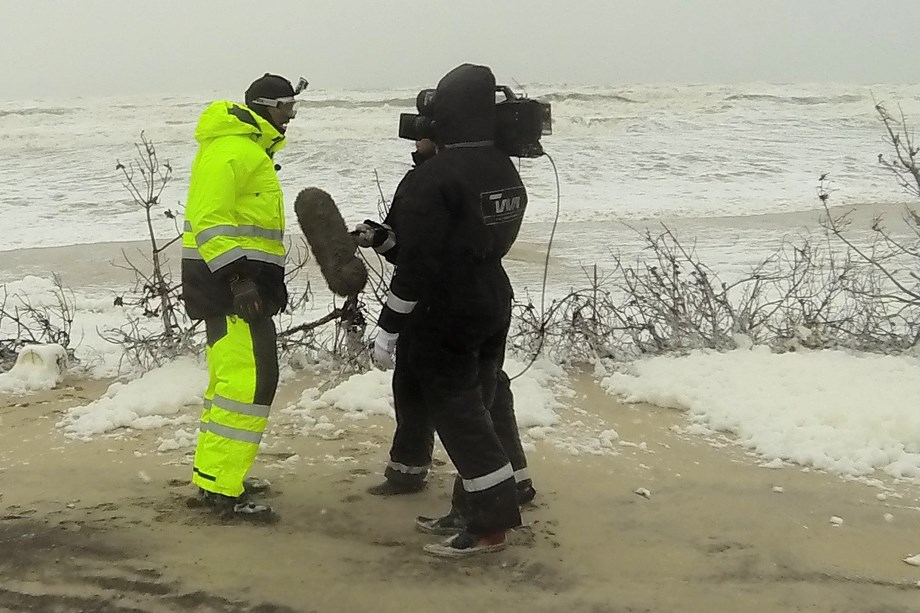 Per Sørensen (left) at work in the field

But as Per explains, this approach also reinforces the dune sea defence in another way. “You always have to take the natural longshore drift into account when applying nourishments. The sand you place gradually travels down the coastline under the influence of waves. We factor this into our calculations. But the prevailing northwest wind on this coast also plays a role. It picks up dry sand from the beach and blows it inland, where it settles – sometimes quite thickly – on and around the dunes. The dune vegetation is adapted to this phenomenon, and soon grows through the sand cover, where it again has a stabilising effect on the new ground surface. The dunes gradually grow higher, creating a stronger defence against the rising sea level.”

Adaptable solution
So by building with nature – “going with the flow” of the wind and water – the Danish Coastal Authority now has a nature based tool for coastal defence that can easily adapt to the needs from season to season. By closely monitoring the changes on the beach and in the dunes, they can apply nourishments when and where the need is greatest while continuing to strengthen the natural barrier The scientific, social and political insights and lessons learned are actively shared with other countries through the NSR Interreg Building with Nature project.

According to Per, this Nature Based Solution is perhaps a victim of its own success. “Because the nourishments rapidly blend into the shore landscape, visitors are hardly aware of them. But if you happen to drop in at the West Coast Farm Boutique in Krogen, they’ll tell you: only since the use of sand nourishments, for the first time in generations, they can sleep soundly during a northwest storm.”