The Twin Dike coastal lab investigates the feasibility of coastal defense as a transition zone between sea and land that combines saline crop growing, sediment capture and refuge area for coastal species.

The aim is, to create a multitude of gradients between salt and freshwater habitats that softens the transition. At the same time, the aim is to investigate whether the financial and social costs and benefits of this concept are considered acceptable or preferrable by society compared with traditional one-line coastal defense by means of one huge dike.

The twin dike is being implemented in the dike reinforcement project between the Eemshaven and Delfzijl in Groningen, The Netherlands. A new dike, inland from the existing dike, is being constructed. The existing dike is not climate proof, but due to this concept it does not need to become higher and wider. Because now both dikes together form a flood protection barrier. In the current dike, an inlet structure will be constructed which allows free tidal flow of the salt water in the area between the twin dikes. The structure will be closed during periods of storm water levels. The inner area, between the twin dikes, will be used for several functions: salt resistant agriculture, nature and sludge collection (to form new clay for future dikes). 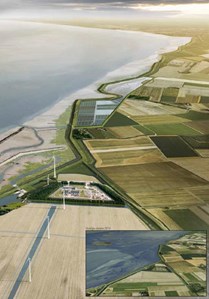