60 minutes of Blockchain: The next generation’s stories

11 June 2021 - Published by Evite van Winkoop
On June 16th, European Master students from the BLING network will give a peak into their current research on blockchain. This event will start at 3pm CET and is the launch event for the 60 Minutes of Blockchain series BLING will introduce after the summer. Don’t miss it!

In this webinar, students will present their research on the implementation of blockchain in the public sector, as well as their insights on digital currencies and e-voting. The students are part of European universities, Groningen University, Karl von Ossietzky Universität Oldenburg, Hochschule Osnabrück and University Gothenburg. There will be two breakout rooms. One focusing on blockchain implementation in municipal environments and one focusing on blockchain use cases in other areas.

The topics of the presentations will be covering blockchain in public sector municipal environments, as well as blockchain use cases in e-voting, health and digital currencies.

The whole webinar series will be moderated by Digital Event Manager Marjolein Wiersma.

The 60 Minutes of Blockchain is a 6-part series, planned to start after the summer break. The six themes will focus on Digital Identity, Transport, Health, Community Building, the Blockchain Ecosystem and Energy. These themes are following the in depth blockchain use cases also researched in the BLING project. During this 60 minute webinars, we will dive into the background of the theme with the help of an expert from the field. Also real theme-related use cases will be presented, followed by an open discussion between blockchain experts, use-case experts and the audience. Follow our twitter (link) and LinkedIn (link) for more information on this webinar series

This meeting will be hosted in zoom. 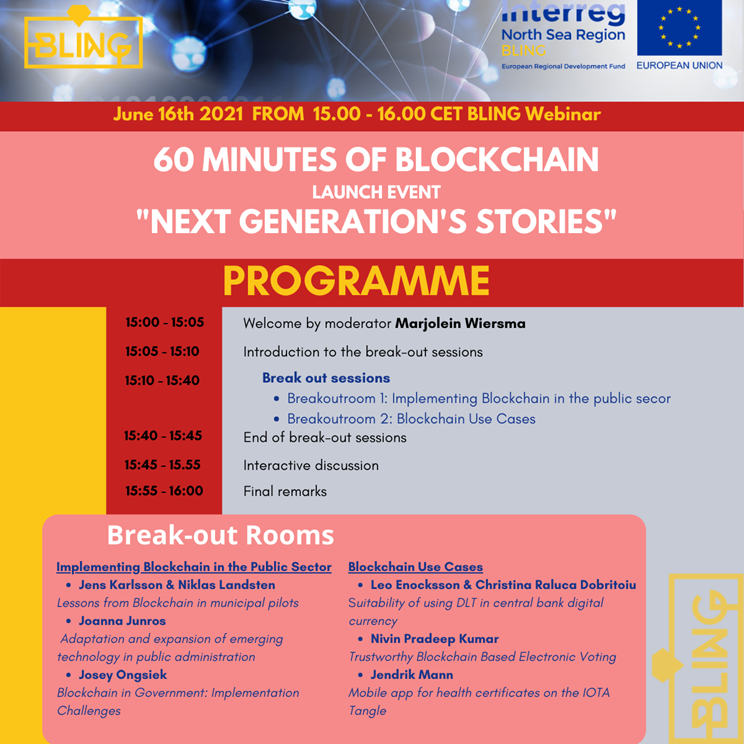