What is the Dutch Blockchain Coalition? 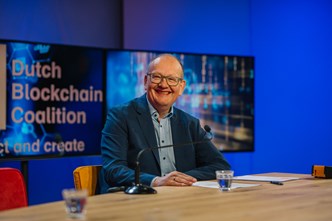 The Dutch Blockchain Coalition (DBC) is a triple helix organization in which governments, knowledge institutions and industry work together to boost an ecosystem for distributed ledger technology. We do this by working together with our partners on different Blockchain use cases and we aim to develop Blockchain-talent in the Netherlands, investigate the possibilities for Blockchain-based technologies and assess the impact of legislation on the use cases. DBC's #BlockchainForGood mission is to advance reliable, robust and socially accepted blockchain applications, create the best possible conditions to allow blockchain applications to arise, and utilise blockchain as a source of trust, welfare, prosperity and security for citizens, companies, institutions and government bodies. For this mission, the DBC is mainly a catalyst and facilitator that activates and connects within a broad public-private network, with connections to the international blockchain ecosystem. Talent development is a very important specific activity, as part of DBC’s Human Capital agenda.

What is your interest in Blockchain?
The idea behind Blockchain attracts Peter very much: Blockchain is based on the decentralization of trust and it enables self-determination. It is all about digital ecosystems and subcultures which act socially responsible. This makes Blockchain relevant: it promises a real added value to our current society in a tech-savvy way. Besides the ideology, Blockchain is interesting because of the technology: it is able to efficiently share sensitive data in a safe, privacy-preserving and decentralized way. This creates many possibilities for great new use cases.

An example of such a DBC use case is a Blockchain-based system to register diploma’s and other HR credentials in an international context. Students who would like to continue studying abroad often face the challenge of proving they have obtained certain certificates. Employees in general have to prove they have obtained certain diploma’s and certificates before they can start in a new job, inside or outside their current employer. Together with the Dutch department in charge of education (DUO), part of the Dutch Ministry of Education, and an open consortium of large employers led by Rabobank, the DBC initiated a Blockchain based solution in which diploma’s and micro-credentials are registered and linked to students and employees. The person himself can decide (self-sovereign) who may have access to his information and can easily share this (efficiency) with the needed institute. This use case has been piloted extensively and is now ready to be implemented.

In contrast to what we sometimes see in other parts of the world, the DBC focusses on “Blockchain for Good”: applying Blockchain-technology to resolve certain societal and economic challenges, whereas others develop Blockchain “for money” or “for control” .

What is the current status of Blockchain?
The Blockchain-hype is over, but that does not mean that Blockchain as a technology has failed. On the contrary, we see more and more practical applications in business and society. No longer do we see Blockchain as the hammer and we are looking for a project the hammer can be used for, but the hammer will be added to our digital toolbox instead. Blockchain becomes business as usual and is now one of our solutions to deal with problems. This is where the DBC is working on: it is time to show what role Blockchain can play as a tool in their toolboxes. Also the sense of urgency is increasing due to the COVID-19 crisis: it forces us to think about non-centralized ways to deal with crucial processes in our society.

The Blockchain ideas we are seeing now are no longer on the level or experimenting, but Blockchain is on the verge of being implemented in large use cases. For example, subsidies are important to develop certain elements in our societies. Unfortunately the associated application procedures are complicated and abuse of the subsidies takes place. The use case DBC is developing with, amongst others, the Ministry of Finance in this context is called Compliance by Design. It shows how this can be organized in a much more efficient and effective way. The grant is programmed in such a way (compliance by design) that it can only be used for a certain goal. This initiative will be further developed in various use cases because this idea can be implemented for other products as well. It is now being used to support the application process of various COVID-19 support grants.

More examples of DBC use cases can be found on the website of the DBC.

Is Blockchain of added value for government?
The role government plays in the DBC triple helix setting is unique. Often, authorities function as the central or controlling party. Blockchain demands the decentralization of data of the central party and puts this into the hands of the users. Blockchain also requires cooperation between various parties. In many of our cooperation-chains we see governmental organizations on crucial positions such as the owners of data. Therefore it is so great to see that Dutch government organization play an active role in the  Blockchain-networks, because they become an active part of the chain instead of staying passively outside. Examples in which governments are part of the Blockchains are Compliance by Design in regulating subsidies, diploma’s or pensions. These examples are already tested or implemented and governments play roles such as a participant or as initiator. The Dutch Blockchain Coalition and I hope to see many more of these initiatives.

For more information on the Dutch Blockchain Coalition visit: https://dutchblockchaincoalition.org/en/