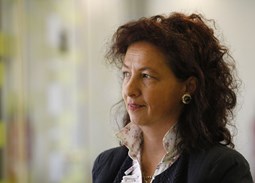 What is your current role?
I am head of the project group New Economy and Blockchain. This group is established by the Slovenian ministry of Economic & Technical development. We are working on implementing blockchain based technologies and integrating it into technical and sociological solutions. I’m also a member of Blockchain Expert Policy Advisory Body (BEPAB), which is established by the Organisation for Economic Cooperation and Development (OECD), on their Blockchain Expert Advisory Body. We have prepared a white paper that identified blockchain use cases that can support the Sustainable Development Goals (SDG’s).


Slovenia is one of the countries in Europe that is on the forefront when it comes to blockchain. Can you tell us a little bit about how that happened?
Yes! It started in 2017. This was when the hype surrounding blockchain was at its highest. In June 2017 we organised a huge meet-up with representatives of companies, academia, civil society and government.

A few months later we did a follow-up of this event, but this time also with members of the international community. We had been working on a declaration on blockchain, which was adopted then. It was in the time that the European Commission established the Blockchain Observatory and Forum. In 2018 I became a member of the European Blockchain Partnership. This is a collaboration between member states and the European Commission.

On a national level we adopted a blockchain action plan. This was a strategy with some very concrete goals. First, we would identify relevant areas to be covered by blockchain technologies and do research on where such applications could be useful. Secondly, we tried to identify if legislation should be changed in order to give space to these technologies, and if so, in what way. Thirdly we tried to define the different roles of specific stakeholders: government, companies, NGO’s, etc.

Then we had a call for projects, the Slovenian government invested 73 million euros in this. Most of these projects involved technologies like Blockchain, Artificial Intelligence and Internet of Things. A lot of ideas focussed on smart cities and smart factories. About 60% of these projects foresaw that they would use blockchain. Another important technology that is related is Artificial Intelligence (AI), it turns out it can be very useful to combine this with blockchain.

What made your approach so successful, according to you?
I think what was special and effective about the approach, was the fact that it was really bottom-up. We organised a lot of meetings with stakeholders and asked them what ideas they had but also what kind of support they needed or what problems they faced. We really got to know the community, and this gave us a good sense of direction and what to do. We saw a lot of use cases that were very particular, it was really in a niche market. We saw a lot of solutions that were not possible before.

Because of this approach, we have been selected as a role model country by the United Nations. They consider our strong cooperation between government and the private sector as an example for other countries.

Ofcourse, these kinds of things also depend on persons, not just methods. Someone needs to be personally engaged. But on the other hand there was also a very strong community in Slovenia with companies developing use cases for blockchain and projects that were being developed. And we successfully connected that with the traditional companies.


What kind of use cases do you see right now for blockchain?
In Slovenia we see a lot of different (possible) use cases. A lot of things are happening around energy, especially the sharing of sustainable energy. And traceability of materials is a very important one too. Other domains are data and health.

What comes next for you?
Currently we are working on new legislation. But we’re also waiting a bit, since the European Commission is also working on recommendations. The most important use case is about digital identity. When we have a solid legal framework for digital identity, we can more easily define how that framework should work and look at the specific workings of the law.

A second step is defining a regulatory sandbox. Not only for the technical sector, but for all relevant industries. We want to respect the existing regulation, but also make it suitable for new technologies such as blockchain.

Another important thing is interoperability and standardization. Since of a lot of use cases can be applied on an international level, it will be very important to make sure the technology has the same standards. So I’m happy to see that a lot of international collaboration is being done on this part.