How to get €5 million in the wallets of your citizens? These are the lessons from Heerlen

In the south of the Netherlands, the city of Heerlen recently launched a blockchain project, which was inspired by the BLING pilot, the EnergyWallet. A blockchain app used to effectively distribute subsidies to the citizens of Emmen, which could be spent on energy saving measures at local retailers. We spoke with Pieter Bonnema, consultant and project manager of the EnergyWallet in Heerlen and Parkstad, about the benefits, challenges and future of the project.

The difference between the EnergyWallet in Emmen and this project is that the municipality of Heerlen wanted to provide an energy subsidy to a specific group of citizens that have a low income. This group of people received a letter with a personal QR code that gives access to an app/wallet on their phone with ‘coins’. This can be used to spend €250,- at local hardware stores. In total 20.000 letters with QR codes have been send in batches over the last 7 weeks. So far 40% of the recipients have downloaded the app and the number is still going up, a second round of letters will be send in the next weeks. Six municipalities in area have joined the project under the name of Parkstad EnergyWallet and in total €5 million has been made available for citizens via the app.

Blockchain at its best 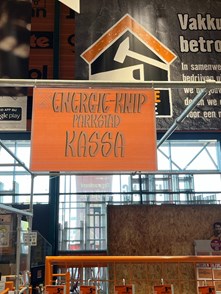 Similar to the EnergyWallet in Emmen, this app provides many benefits for different parties. For the municipality it is much easier to track progress and target specific groups of people. Data that is often hard to gather but required when distributing subsidies, is now readily available in real-time. It also helps prevent fraud. As each individual receives a personal QR code which links to a digital ‘wallet’ with an amount that can only spent once. Furthermore, it allows for money to be transferred directly to the retailers/hardware stores and does not have to pass through the hands of citizens. And can stimulate the local economy. Lastly, it makes the services provided by municipalities a lot more user-friendly for citizens, as the app is easy to use. With this technology it only requires downloading and scanning the QR-code and voila the deal is done.

It’s not all roses and sunshine
For this technology to work it requires that both citizens and retailers are able and willing to participate and use the app. On the one hand, citizens need to be able to understand how the app works and have access to a smart-phone. This can be challenging for some, but Heerlen has provided options to help in person to get familiar with the app and there are alternatives ways for using the coins. On the other hand, retailers need to be involved in order for citizens to spend their coins. Both parties can require some convincing and trust building, but in the end they will realize that the system is simple.

Before getting to this stage, first the organization itself, the municipality, has to get on board. With Heerlen the energy department was enthusiastic from the start, instead the challenge was to get the financial department to adapt to the new system. Rather than seeing this as a chance to automize their processes, the department preferred to stick to manual checks and transfers. A project like this shows how innovation can trigger a certain reservedness to adapt to new ways of working. Not all challenges can be solved directly, but Heerlen is in transition.

Scaling up and branching out
The success of the Parkstad EnergyWallet has not gone unnoticed. A local housing corporation wants to expand the project in its mission to make houses more energy sufficient. This corporation wants to give the same opportunities to the inhabitants of their houses who are just above minimum income level (and thus not part of the original target group). The costs of supporting these inhabitants will be paid for by the housing corporation itself. Another party that wants to explore the opportunities of this technology is the local theatre. They want to use the app to become more effective in reaching out to people with low income and getting them into the theatre.

Digital coins are the future
The technology is there and projects like the Parkstad and the Emmen EnergyWallet show that digital coins are a proven success. It is the way forward as it provides a much more effective way of distributing subsidies and making sure that money is spend in the way it is intended. Technology like this gives governments more control over their money and lead to subsidies having more effect in order to support its citizens. The possibilities are endless once you’re willing to take a chance on blockchain.