Andreas Hartl is Head of the AI1 Division of the German Federal Ministry for Economic Affairs and Energy. He is responsible for AI strategy, blockchain strategy, and data policy.

You're working on AI/blockchain/open-data – these are a lot of inter-related hot topics! How did you end up working in this area? 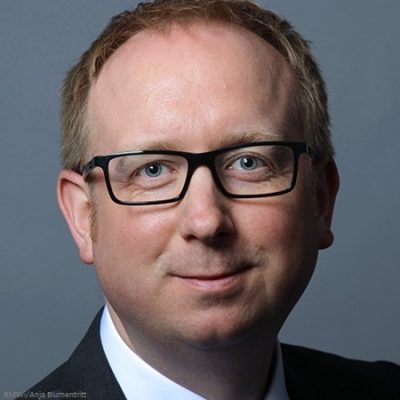 I’m a legal specialist, I started in telecommunications and radio regulation, and recently oversaw the production of a Green Paper on online platforms – which was a bridge to move on to digital issues and to the division I’m now heading.

If we look at the priorities of the current EU commission, it’s sustainability and climate, fighting the pandemic, and digital issues – the issues of digital policies have in essence transformed into discussions about data, and access to data. The use of data is very important, particularly for the use of technologies like artificial intelligence (AI) and blockchain. Blockchain has many features which can help us support and establish a data economy. And data is very relevant for AI – machine learning (ML) isn’t possible without data – it’s like having an engine with no fuel.

In previous years we had very technology-oriented discussions – talking about things like the Internet of Things (IoT), AI, blockchain, and so on. What we weren’t discussing is what these technologies actually mean for the economy, and for society. The ‘data economy’ is the thing that brings all these things together in my division: there’s AI, there’s blockchain, and in the middle is the data economy. The Ministry is very keen to facilitate the establishment of a data economy – but what this data economy will mean for economic processes, for services and goods, for transactions, is still rather unknown territory.

Can you tell us about the German Federal Government’s Blockchain Strategy?

Our blockchain strategy was adopted in September 2019, based on responses from a very broad online consultation process that started in 2017/18 when we followed discussions about ICOs – initial coin offerings – in Berlin’s blockchain community. We ran a series of workshops to collect information and then got political approval for the development of a blockchain strategy. We had responses from more than 150 companies, organisations and individuals. We’ve agreed to have a learning strategy – we need to keep in contact with the community, and have set up an expert dialog to do deep dives on key questions – like studying the ‘token economy’, which is one of the goals of the strategy.

Commentators described the first wave of the internet as the ‘Internet of humans’, followed by a second wave which was the ‘Internet of Things’. The third wave will be the internet of values, and these values will be represented by tokens, and these tokens will be based on a blockchain. With tokens you can facilitate economic processes, information gathering, transactions, the allocation of goods. Blockchain can facilitate all of this. We are also looking at privacy issues – particularly GDPR compliance and blockchain. We’ve brought together industry and State and Federal privacy watchdogs to identify and focus on specific problems/pain points when developing blockchains.

“AIl, blockchain and open data aren’t the next big thing, they are the big thing already!”

Where is blockchain in government in Germany right now?

It’s hard to say whether we’re ahead of the curve or behind the curve – it’s hard to determine as there are no metrics we can use! In a way we are spearheading global development in Germany, as our Federal Government was the first government to set up a comprehensive blockchain strategy, however there are a lot of opportunities that aren’t being explored at the moment – both by companies and by government administrations. In terms of policy making I think we’re quite good, and I can say that as I have a good benchmark as I represent Germany on international forums like the OECD Blockchain Expert Policy Advisory Board (BEPAB) and the European Blockchain Partnership (EBP). So I think in terms of policy we have done the homework, and are implementing it, but where we can get better is in the uptake – by administrations and in the wider economy. The division I’m heading is co-ordinating the delivery of our blockchain strategy – but we’re not implementing everything ourselves – for example the German Ministry of the Interior is doing a lot of work. A recent BearingPoint study on use of blockchain technologies across all levels of German government – federal, state, municipal – identified 50 blockchain projects. But even the most ‘mature’ of these projects aren’t really as mature as other IT projects.

When you listen to the Blockchain community it’s often supply-led, meaning that the suggestions are oriented to systems that are already in place, e.g. with proposals suggesting that we transform land registries, or other existing working registries. I would say that if we want to show the efficiency of the technology, and how to show that blockchain is the best technology for specific solutions, then let’s go greenfield. Do not try and replace a running system that already works - what I’d call a brownfield, but find a greenfield – a problem that’s not been solved. There the acceptance will be bigger, because you don’t have to convince relevant stakeholders of the benefits of blockchain against existing and functional solutions. At the end of the day we are spending taxpayers’ money – we need to be efficient. And unless there is a clear benefit to doing something, we’re not going to do it. It is easier to demonstrate the advantages and benefits of blockchain when you don’t have to oust a working system.

I am always advocating for a level playing field – for technology-neutral systems and to articulate the clear benefits of technologies. And this works in both directions. Let’s give blockchain a real opportunity, a real chance, but let’s not do blockchain just because it’s the new thing – that would not be responsible government.

“When you are fishing, the worm doesn’t need to like the fish, the fish needs to like the worm.”

How does this compare to governments elsewhere in the North Sea Region and across the EU?

I really wouldn’t like to compare our government with other governments. I’d highlight the European Blockchain Partnership – all EU members states are partners, plus Norway, Liechtenstein, and Switzerland. We have an excellent partnership with a common commitment to set up the European blockchain services infrastructure. What we have accomplished in the first two years with the Partnership is remarkable. I think it’s important to have built this at the European level, as none of the member states have the size and relevance on a global scale.

The EBP was established in 2018, the main purpose being building the European Blockchain Service Infrastructure, which has nodes in every member state. These will form the basis for a set of blockchain use-cases – starting with self-sovereign identity, and notarisation services. We have extended this to include use-cases on asylum seekers and for financing start-ups. We want to build an infrastructure for public bodies to use. We’re just starting to prototype – we’re not conceptualising, we’re testing things and building mature use cases.

An example is a French student who wants to study in the Netherlands – they can use a blockchain service to authenticate their diploma. And if they then want to work in Italy, they have an identity they can use to start-up a company or apply for a job.

What are the main drivers for your interest in adopting blockchain in the Federal Government?

I would say that cost efficiency is a requirement, not an incentive. If you’re looking for a solution, for a new service, and it turns out that blockchain is the best way to do it, the incentive is to build a solution that works for the people in the administration, to have suitable processes, a straightforward database, a nice front end, it needs to be easy for clients - for citizens and companies – to use, and for the staff of the public administration. We have to remember that blockchain isn’t a front-end technology, you don’t notice it on your wallet, or on your smartphone. It’s a back-end solution – you don’t feel it. It’s somewhat different from AI, where some things are identifiable as AI (like recommendations), blockchain is hidden (from the user).

You could either have a centralised system of origin of trust, or a decentralised system – where you don’t necessarily trust an authority but you trust the protocol. This is a decisive advantage in multipolar relationships– this feature of blockchain provides real benefits.

As a practical example, I don’t own a car, but I use local car-sharing services. And I have to prove to each service that I have a driver’s license – I have to show the clerk my physical license. But with a blockchain services you can do this automatically – there is a multi-polar relationship between myself, the licensing agency, and the car company.

When it comes to identity, blockchain is going to be important for identity services – and will complement the systems we already have. I think we’ll have physical drivers licenses for years – but electronic systems will be useful too.

What are the big challenges facing blockchain in government?

Education. Education is the thing. There is a lot of disinformation - or not enough information - on blockchain. The success of Bitcoin is in a way detrimental to the development of other blockchain services – people think blockchain and bitcoin are the same thing or linked, they associate bitcoin with the darknet, and with high energy use and with energy waste. There are mannegative connotations with bitcoin, which frames the blockchain discussion in unhelpful ways. So we need education that there are sustainable blockchain solutions, that there are consensus mechanisms that don’t use ‘proof of work’ and which use large amounts of energy, and that we can use permissioned systems – like private blockchains – to ensure security and manage risk. Private blockchains will gain momentum, and at some point some private blockchains may become public - but not permission less – once they are mature.

One of the four objectives of our Federal Blockchain Strategy is information and networking – providing information and educating people. We’re not saying they need to go back to school – but we just have to provide them with the proper information so they can make informed decisions.

To be frank our government use cases are not as mature as I would like them to be, as shown by BearingPoint, and we can be better. At the Federal level we have the three use-cases I described previously – but they’re pilots, and not real use-cases – yet. I see lots of opportunities around IDs – self-sovereign identities and blockchain can be one of the technologies. We are looking forward to the results of the expert dialogue on this which we will start soon.

Do you have a strong legal infrastructure to allow use of blockchain?

Our national and EU legislative frameworks are technology neutral, so blockchain systems are not prohibited. But one of the objectives of our approach has been to ensure that our regulatory frameworks are also technologically neutral. As an example a bond – an investment security – has to be a paper document – but is that right in the 21st century? Why not digital? So we are changing our securities assets law to allow this – so the law is technology neutral, and (blockchain) digital assets would be covered, not just paper assets.

We work with the Blockchain Association in Germany – they identify issues, regulatory provisions that may hinder blockchain, and we also liaise with other German ministries to see how we can resolve issues like this.