Jasmien Wellens is project manager innovation and digitalization at the City of Roeselare. Find out how Jasmien is exploring new blockchain opportunities in Roeselare.

1. How is the city of Roeselare involved in blockchain; can you tell us a bit about your (latest) developments? 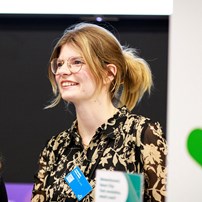 After a successful pilot in 2021: ‘Healthy on the Blockchain’, a collaboration with Howest, we are actively searching for a new use case in Roeselare. Last spring we organized a workshop with The Value Hub (part of the Cronos Group) where we screened the process catalogue of the City to find government processes that have the potential for optimization by blockchain.

Four processes seemed to have potential and in these processes we dived deeper with a session in which the entire process was laid out and analyzed. One of the processes has potential to be optimize through blockchain, namely the use of the leisure pass the city provides to its citizens. At the moment, we are focusing on having the relevant internal parties on board and exploring how this technology could be implemented and how it would affect and/or improve the current system. Besides a possible new pilot, we would also like to organize another blockchain event in the spring of 2023. So we have lots to work on are very excited about the next steps.

2. Which blockchain topics do you find the most interesting or promising?

Personally, I have learned a lot from the pilot in Emmen, the EnergyWallet. This app used blockchain to provide energy subsidies to citizens, which they could use to buy energy saving measures at local stores. For citizens, this app was not about blockchain, rather it is an app that is easy to use in order to get access to a subsidy. In my opinion this pilot is one of the most successful ones in the BLING project. However I am also very excited about all the work going on in the universities that are part of this project.

3. What is the most valuable lesson you have learned so far by working together with international partners in this European project?

I joined the team of Roeselare in 2022 so I am a "new" member of the BLING project. My first meeting with everyone was during the steering committee in Roeselare and everyone was very welcoming. I did not have any knowledge on blockchain and how it could benefit governments. But by being part of this project I have learned and seen the endless possibilities. To me, the success factor in this project is the different people. Everyone has their own perspective in interests in the way they look at blockchain: public administrators, professors, developers etc. The most valuable lesson to me is: bring people from different backgrounds together and you will always find a synergy.