The Free and Hanseatic City of Hamburg strives towards a mobility transition within the following years, making mobility more sustainable and environmentally friendly. The city wants to change the mobility behaviour by strengthening the means of transport that are causing less impact on the environment and climate. By 2030, the goal is to increase the share of cycling, walking and public transport to a total of 80 per cent of all routes travelled. Cycling, which is especially cost- and space-efficient, plays a crucial role here. More specifically, the share of all journeys made by bike should be increased by 25-30 per cent within in this decade.

Within the framework of Hamburg’s strategy of Intelligent Transport Systems (ITS), the city fosters, develops and conducts ITS-projects that focus, amongst others, on cycling. In order to increase the proportion of cycling, it is essential to promote its attractiveness. A cycling infrastructure that ensures smooth and easy cycling within the city is vital for a competitive alternative to motorised private transport. Furthermore, people enjoy cycling when they feel comfortable and safe. The ITS-project PrioBike-HH follows this approach and addresses both topics: increasing cycling comfort and safety. These objectives are tackled with a bundle of different measures. Firstly, several traffic lights are coordinated to establish a green wave for cyclists. Secondly, information is provided to the cyclists through an app to speed up or slow down in order to catch the green light. This type of information will also be displayed on speed advisory pillars installed along cycle routes. For reaching the objective of enhancing cycling safety, an infrastructure based warning technology will be applied to reduce the amount of accidents involving cyclists. The four-year project PrioBike-HH started in 2021 and is funded by the German Federal Ministry for Digital and Transport. Most measures are currently in their design and development phase, but will be piloted within the city at different locations during the following months.

Establishing the green wave for cyclists

Most cycling routes in Hamburg are not yet equipped with "green waves" or similar measures prioritising cyclists. Therefore, the project PrioBike-HH aims to make cycling more attractive by accelerating the bicycle traffic and reducing the waiting times at traffic lights. For this reason, several traffic lights in the inner city have been coordinated along specific sections to establish a green wave system. So far, the green wave for cyclists has been implemented at two road sections, which cyclists can pass without stopping when driving at an average speed of 18 km/h.

Adjusting traffic lights can be rather challenging and is not possible at all intersections. Therefore, the second measure is the development of a cycling information app (see Figure 1). This will provide a routing service and a green light optimal speed advisory (GLOSA) to enable a digital green wave for the cyclists at all routes and intersections. The GLOSA can be provided by combining the information of the predicted green time with the cyclist's location, speed and direction of travel. Thereby, a minimum and a maximum speed can be calculated. With the minimum speed, the cyclist will arrive at the end of the green phase, just passing the traffic light before it switches to red. The same happens vice versa for the maximum speed and the beginning of the green phase. Since cyclists have a different individual performance, the calculated speed recommendations can be personalized. Also topological conditions will be taken into account to calculate a realistic speed advice. The app should also work with innovative forms of interaction beside the smartphone display, for instance, with wearables such as smart watches.

Different types of cyclists need to be addressed in a different manner. As the city aims to reach also cyclists who are not riding with a smartphone, another measure is the installation of speed advisory pillars (see Figure 2) that visualize speed recommendations / information or remaining green times along selected cycle paths. These pillars are positioned approximately 50 to 100 meters before the traffic light. The information displayed at the pillar may be the countdown of the remaining green time or a recommendation of the speed necessary to catch the green light. To provide precise information, a connection to the traffic light controller needs to be established - wired or wireless via ITS-G5. In Hamburg, approximately 80 signalized intersections are equipped with roadside-ITS-stations. Thus, ITS-G5-messages are preferred to reduce costs for civil engineering. Furthermore, the pillar needs a vehicle-ITS-station to receive messages. In this case, a SPaT-message (signal phase and timing) provides the remaining green- or red-times, that can be displayed directly or used to calculate a speed advisory to reduce stops while cycling.

In order to enhance cycling safety in Hamburg, different solutions are explored for warning other traffic participants about cyclists in the intersection area. With this infrastructure-based warning technology the intersection safety is ought to be increased by preventing crashes between vulnerable road users (VRUs, such as pedestrians and cyclists/e-scooter) and other turning traffic participants (e.g. motorized traffic). The information about cyclists crossing a road in the course of their route is to be provided via a warning message that is triggered event-based when a cyclist is detected in a defined detection area as illustrated in Figure 3. A feasibility study will be conducted to evaluate and choose the specific technology to be applied. Long term, the system may be rolled out at accident-prone intersections. 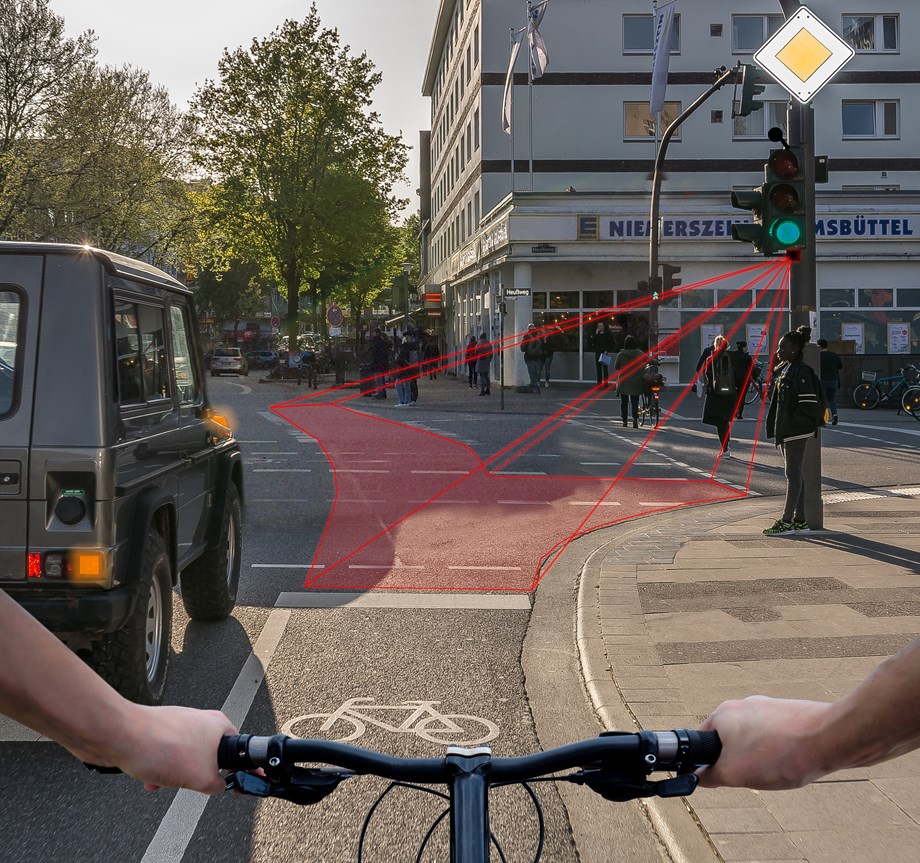 The Free and Hanseatic City of Hamburg will be a partner in the follow-up project MegaBITS, which will be submitted as a proposal for call 2 of the Interreg North Sea Region programme.