Oldenburg Bike Challenge and Company Challenge proves: App with gamification and tracking functions can lead to an uptake of cycling

"Gamification features have the potential to change people's behavior and can increase cycling."

The baron mobility service gmbH investigated the correctness of this statement in the last year as part of their participation in the European Interreg B research project Bicycles and Intelligent Transport Systems (BITS).

Within this project, the Oldenburg Bicycle Challenge was carried out between September 2020 and September 2021, as well as the company challenge "Cycling to Work" between the end of May and the beginning of July 2021. The participating cyclists had to download the Ciclogreen app and register for the BITS challenge. The app anonymously recorded the cycled distance, the number of kilometres cycled and the average speed. The participants could see their own statistics in the Ciclogreen app, collect points, so-called “Ciclos”, rank with other participants and win prizes. The central question of the two pilot projects was whether these gamification and tracking features lead to an uptake in  cycling among participants.

The Oldenburg Bicycle Challenge in numbers

In the Oldenburg Bicycle Challenge, 201 active participants cycled ambitiously for a year and covered 168,850 kilometers by bicycle and e-bike, which corresponds to a distance of around four times around the world. In doing so, the participants saved 42 tons of CO2 compared to the use of a car. During 10 rounds with different mottoes such as "Fit into summer", "Bad weather challenge" or "Bright start into spring", the participants could win various prizes such as cycling accessories and clothing, Fairtrade tea and coffee and in the first round even an E-bike. In addition, the points could be exchanged for discounts in stores and cafés in the city of Oldenburg.

The Oldenburg Bicycle Challenge was very well received by Oldenburg residents, but there was a large difference between the total of 422 registered users and the total of only 201 active users in the challenge, who regularly opened the app and recorded their routes. This difference was mainly due to technical problems in the app and in the registration process. The first and second of the ten challenges had the most active users with 90-110 users, but this number declined afterwards. This decline might have been caused by the snowy and rainy weather in the winter months. From the third challenge onwards the number of registrations remained relatively stable with 50-60 active users per challenge. The users were mostly between 25 and 35 years old, however older users remained more active over the whole duration of the Oldenburg bicycle challenge while the participation of the younger users declined over time.

On average, 258 kilometres were travelled per challenge day, with the lowest number of kilometres per challenge day in Challenge 1 (230 km/day) and the highest number in Challenge 9 (312 km/day). The average kilometres per challenge day remained quite stable even in challenges with fewer active users, which means that the active users cycled more kilometres per day. The number of trips per month and the number of trips per day also remained relatively constant throughout the whole year of the Oldenburg Bike Challenge - despite decreasing active participation. This suggests that the active users actually cycled more over the whole period of the Oldenburg Bicycle Challenge. The data also proves that the users mainly used the bike for commuting to work and a little less for commuting to leisure activities since there were more trips on weekdays – especially during rush hours times in the mornings and in the evenings – than on the weekends. 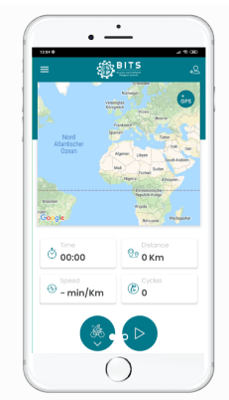 The company challenge in numbers

The company challenge "Bike to Work" was also a great success! 14 companies with a total of 172 active employees took part in this challenge and competed against each other in a ranking that was available on the website. The participants covered a distance of 47,222 kilometres within 1.5 months and saved almost 12 tons of CO2 compared to the use of a car. The winner was the DRK Blutspendedienst Nord-Ost with 16,500 kilometers. One participant alone cycled 3111 kilometers.

In addition, two companies took advantage of the opportunity to hold an internal company competition in which employees competed against each other in cycling and won internal company prizes. 51 active employees covered a distance of 10,531 kilometres and saved 2.5 tons of CO2. The feedback on these internal challenges was very positive according to an evaluation survey afterwards.

While the bike routes of the Oldenburg bicycle challenge only took place in Oldenburg and the close surroundings, the routes in the company challenge took place all over Germany due to the different headquarters of the participating company. Because of the COVID-19 restrictions and the Home Office regulations, the team at baron mobility service gmbH opened the company challenge to all routes and not only to the routes to the workplace and back. As a result, employees also used the app in their holidays to record their routes.

The complete data of the company challenge has not been analysed yet, therefore the main conclusions of the GPX data will follow.

Conclusions from the evaluation surveys

One of the main insights was the motivation of the participants to use the app.

According to 43% of participants in the final surveys of the Oldenburg Bike Challenge and 36% of participants in the Company Challenge, the ability to record their routes via the app and view their own statistics such as distance, CO2 savings and calories burned in the app had the greatest influence on their motivation to continue using the app and cycle more. Participating in a challenge and the possibility to win prices was less interesting for the participants in both challenges. 30% of the company challenge users also reported a high motivation due to the possibility to check the ranking with other participants in their company. However, this was not very motivating for the users in the Oldenburg bicycle challenge according to the survey.

Regarding the uptake of the actual cycling quote, we can conclude that both challenges generally led to an uptake of cycling among the users. However, this result is limited in its meaningfulness, as you will see in the article “Lessons learned from two Baron Mobility Challenges in Oldenburg using a mobile app”.

In the Oldenburg bicycle challenge, overall, about 20% of the participants in the final survey stated that they had cycled more often since using the app. This also corresponds with a reported increase in actual cycling: we found an immediate increase of 7% of participants commuting by bicycle (almost) daily, as well as an immediate increase of 4% of participants using bicycles for shopping or recreational activities at least once a week. Similarly, the data - both registered data and survey results - clearly showed an increase in miles travelled and thus longer distances travelled by active Challenge participants.

The project team at baron mobility service gmbh, who initiated and accompanied the Challenges in a leading role, as well as Ronald Bankowsky, founder and managing director of Baron, are extremely satisfied with the results of this pilot project: "I am very pleased that we were able to inspire so many participants. With the data obtained, we were able to gather helpful information about bicycle traffic. We are already planning the next projects." (Quote from Ronald Bankowsky).