New sniff sensor can do more

The successor to the Sniffer Bike sensor is smaller, cheaper and more versatile.

Since 2017, the province of Utrecht has been working together with several companies on the Snuffelfiets project. The Sniffer Bike is also a pilot with two BITS partners, Zwolle (City of Zwolle) and Overijssel (by Deelfiets Nederland). At the end of 2018, the first ten cyclists with a Snuffelfiets took to the road with a sensor box on their handlebars with which they map the air quality along cycling routes. In June 2019, the number of cyclists was expanded to 500. In a year and a half, the participants cycled approximately 750,000 kilometers and collected 20 gigabytes of data.

The mobile air measurement units are now also used in Norway, Sweden, parts of Italy and France. The Ministry of Foreign Affairs has introduced Dutch innovation in various countries that like to monitor their air quality. That was reason for sensor manufacturer SODAQ to further develop the prototype together with TU Delft and the province of Utrecht.

This has now resulted in a smaller and smarter version of the sensor with a new mounting system, which makes it easier to put on or take off the sensor. The device looks like a large bicycle bell. It measures the concentration of particulate matter (PM2.5), the temperature and the humidity every ten seconds, approximately every fifty metres. The sensor transmits that data via the Internet of Things (IoT) to an online platform. Both the results are shown there and it is possible to see per hour whether the air quality is good or bad for each area where you cycle. 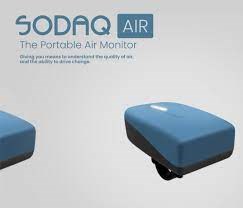 The sensor can also measure air pollution when it is stationary, so it can also be used at home or in the garden. The device does not have a battery, but a rechargeable super capacitor. Lights on the sensor also immediately indicate the situation on site. Using the platform, users anywhere in the world can see the air quality and by entering a unique identifier the air quality of their own routes. Because the sensor also measures temperature, it can be used in the discovery of so-called heat islands; urban areas where it is warmer than elsewhere, which can lead to heat stress.

Since the first prototypes, the price of the sensor has more than halved. SODAQ shares the technology behind it via open source on the internet, so that other parties can produce or adapt the sensor themselves. To bring the AIR to a worldwide audience, the company has launched a crowdfunding campaign on the Kickstarter platform.

Check out the this video to find out more.