The BITS project is building up a huge database on European bicycle data sets. In these days the CyclingDataHub (CDH) which connects all the data sources from different countries as a core component received an update. Nearly 200 of the 258 data links to external data sources that are available on the open data platform so far were contributed by the Bicycle Data website. The links were connected to the CDH by the Generate Link function of the open data portal (Open Bicycle’s Data).

What is also new in the update of the CDH are the geographical layers that allow the user to differentiate not only between different countries but also between regions. As you can see on the Screenshot there are data sets from German regions as Lower Saxony, Hessen, North Rhine Westphalia, Hamburg, Berlin, Baden Wuerttemberg or Bayern (Bicycle Counting), Dutch regions as Utrecht or Zwolle (Sniffer Bike), Flemish regions as Antwerp (Near Accidents) or from the United Kingdom (Bicycle Counting in East Riding) available. Bicycle Data and the VLBA Department would like to thank all these external data providers in- and outside of the BITS circle and of course the Province of Antwerp for connecting our Bicycle Data data sets to the European platform CDH. This makes our project a big success! 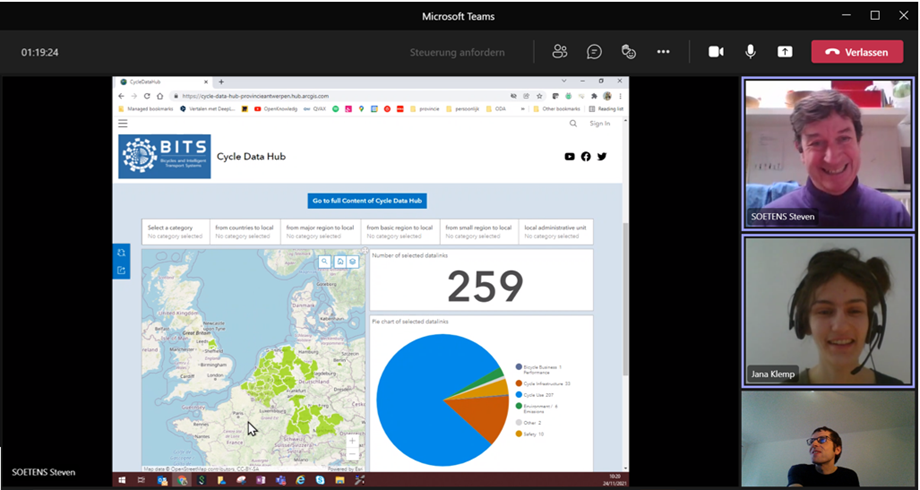 The CyclingDataHub now includes a lot of data sets from the Bicycle Data website – the update of the CDH was presented by Steven Soetens (Province of Antwerp) to Jana Klemp and Johannes Schering of the VLBA Department as part of an online meeting.