This article was originally published in Dutch in MobiliteitsPlatform and can be found here.

Mobility, the environment and citizen science, all comes together in the sniffer bike. Almost two years after the launch of the sniffer bike, it has become clear that the concept is catching on and more and more parties are starting to use it. What have we learnt in recent years and what does the future of this type of initiatives look like?

On 17 May 2019, the snuffelfiets (Dutch for ‘sniffer bikes’) project was launched in the province of Utrecht. In a collaboration between province, municipalities, RIVM, Civity and Sodaq, bicycles were fitted with measuring equipment to allow residents to play a role in collecting data on, among other things, bicycle use (using GPS) and air quality. Since then, things have been going fast: besides Utrecht, sniffer bikes have been introduced in cities like Zwolle, Gelderland (FoodValley), Den Bosch, Eindhoven and Sittard.

A better view of cyclists

An important reason for the province of Utrecht to launch the pilot was to get a better picture of the cyclist. According to Eric van Dijk (Province of Utrecht), this is partly because there is still a lack of valuable knowledge on the behaviour of cyclists, but also to ensure that bicycles can be better represented in data and models than they are at present.

The sniffer bike project has therefore been used to gain insight into the origins, destinations, and routes of the participants. Also, analyses were made of trip lengths and travel times and there are plans to use the data even more through smart combinations with other data sources and analysis of, for example, waiting times. The sensor data was used for analyses of air quality and the influence of environmental data on the travel behaviour of participants. Furthermore, there are opportunities to research the currently unexploited data on heat (stress) and unevenness in the bicycle infrastructure. Besides the data, the results also include valuable lessons on practical matters such as how many participants are needed to produce usable data and what kind of issues one might encounter when processing the data. One of the risks, for example, is that there are not enough respondents or data to carry out proper analyses and to ensure privacy.

Although the experiment did produce useful data, you could say that the greatest success for the province was something else. It soon became clear that there was a common interest here, both with the participants and with various themes within the province (air quality, bicycle data, knowledge development). This made it possible to have constructive and substantive discussions: "You encounter other ideas, other lines of reasoning. Most people are in good spirits and open to exchanging ideas, but you need a platform to do that". The sniffer bike project provides this platform and enables citizens to participate in the discussion of important issues. The Province, therefore, intends to further expand this new form of digital participation and cooperation.

The project is a concrete and sometimes almost cuddly concept, but it deals with a major theme: Digital Participation. Society is becoming increasingly digital, and this offers both opportunities and threats. Although technological developments are the basis for progress, it is also important to have an eye for those who may not benefit from these developments. This is what digital participation is all about. Within digital participation, we can distinguish some themes: 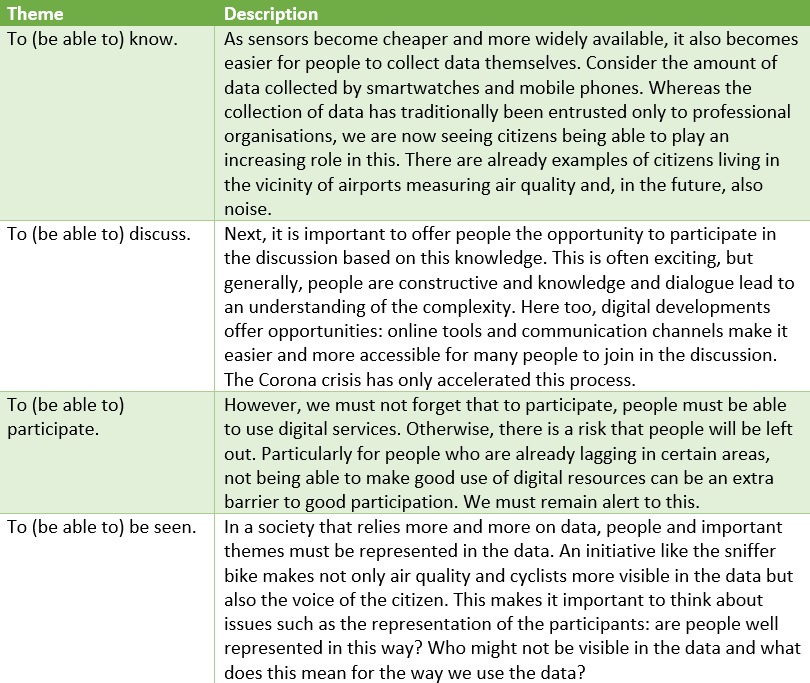 Now the municipality is working on a larger tender to increase the number of people using the sniffer bike. The aim is not only to collect more data but also to achieve a city-wide and representative group of participants. For this purpose, the municipality is cooperating with, among others, the Fietsersbond and housing corporations.

Next, Zwolle wants to focus on better utilisation of the data. Apart from making the data available and presenting them to citizens and policymakers in the right way, according to Geert Janssen (municipality of Zwolle), this involves making smart combinations with other data sources: "How can you link all that data from the air quality to the data we already have? Where are the cyclists? Where are certain trees? Where has the oak processionary been reported? For instance, can we say something about the presence of the oak processionary caterpillar next to busy cycling routes and provide alternative routes, or is combating it a better idea?” For context: the oak processionary caterpillar has been a real nuisance for cyclists in some areas the last couple of years, as it causes a very annoying itch.

The next step is the development of a mobility dashboard on which not only the data from the SnuffelFiets, but also other mobility data are presented attractively and understandably. In the future, the data may also be linked to the Digital Twin City, a kind of digital copy of the town in which various data sources are combined and made transparent. For cyclists themselves, local authorities are considering route advice based on personal preferences. Using the sniffer bike data, in addition to insight into the quickest routes, people might also receive advice about the healthiest and most attractive routes, making route planners more and more personalized.

First and foremost, the municipality is enthusiastic about the concept, says Geert: "The best part is that you involve residents in their environment, make them aware of what is happening in that environment, collect data and do something with that data. We really get something out of it and it is not just a toy of the data specialists. I think that's the charm of it."

At the same time, we see new forms of the sniffer bike concept emerging in Zwolle. Deelfiets Nederland is equipping their electric shared bicycles and delivery bicycles with built-in sniffer sensors. They are also investing in the further development of the concept, such as an own dashboard, smaller circuit boards, the possibility to power the sensors with a dynamo and the possibility to also collect nitrogen data. When asked why Deelfiets Nederland is investing so much in this project, Oumar Sylla (founder of the company) says it has to do with the positive energy: "I like to inspire people, to create that wow effect. To make people ask themselves: Is that possible? Yes, it is possible."

It is also commercially interesting for the company. Deelfiets Nederland is dependent on municipalities and other partners for locations where they can offer their bikes. Making the sniffing data available is therefore also a Unique Selling Point used to offer bicycles in attractive places (such as train station locations): "You make space available to us, and you get data in return". According to Oumar, it is important to handle the data in the right way. This means that they not only make the data available but also think carefully about how it is presented and how privacy must be handled. In addition to bringing in knowledge for this purpose, Deelfiets Nederland cooperates with University of applied sciences Windesheim for the analysis of the data. Currently, the company is working on the expansion of its bicycle sharing system to other cities, which will also provide new data.

Even abroad, there is interest in the concept. A partner in the BITS project has plans to work with it and also collect sound data. There are more and more signs that noise has a big impact on the quality of life and the sniffer bike (or will it also be a listening bike?) is a nice tool to get more insight into this.

The sniffer bike is on the rise and is far from being fully developed. There are still many possibilities when it comes to using other sensors, new data applications and new forms of collaboration between government, citizens, businesses, and research. Digital participation is becoming an increasingly important theme and the sniffer bike provides a glimpse of what this could mean for the role of governments. Reinventing this role can be a challenge, Eric van Dijk agrees: "What are you still in charge of as a government? You become more of a partner than a top-down organisation, but of course, you still have the responsibility to monitor the balance between individual and general interests. This is a slow process, but it is important to think about the government's place. This kind of project helps us to find our way in this."