Bicycle and ITS: Cycling Apps in all Shapes and Sizes

The following article is written by Ronald Jorna and Robin Kleine, Mobility Consultants, and originally published in Dutch for Mobiliteits Platform here.

When you think of cycling apps, Strava (for the sporty cyclist) or the fietsknooppuntenplanner (in the Netherlands and for the recreational cyclist) spring to mind. But if you look in any mobile app-store, the number of apps available is staggering. Take a deeper look, however, and you will see that each different app has their own purpose. For some, you need to open them before getting on your bike (pre-trip). Others assist you during your ride (on-trip), and finally, some are for use after cycling (post-trip).

Using these three parameters, it appears to be possible to refine the purpose of the various apps, resulting in the table below: 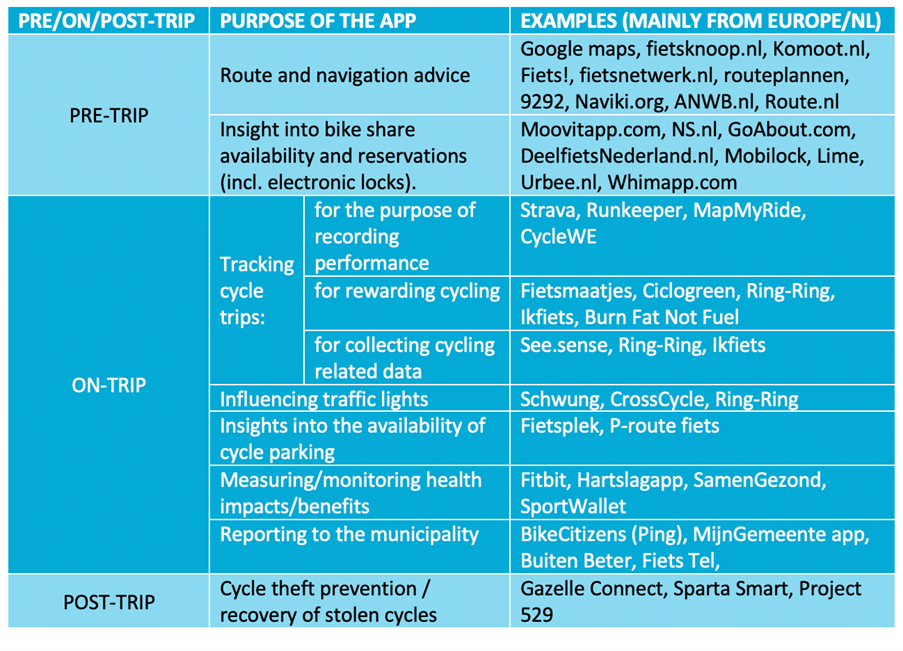 App use among cyclists

The Bicycles and ITS (BITS) project, led by the province of Overijssel, therefore looks at how data from ITS applications can be used to make cycling safer, faster, more comfortable and/or more fun. For this purpose, we performed a survey in several cities. The first noticeable result is that cyclists already make fairly good use of apps. For instance, more than two-thirds of surveyed cyclists in Zwolle indicated that they use one or more cycling-related apps. A significant proportion of this group consisted of users of weather and route apps (both used by over 40%), but apps with a game/competition element and apps aimed at cycling infrastructure and services also have a fair number of users (16% and 9% respectively).

For those who did not use apps during their cycle trips, the most important reason identified is that they do not want to be distracted while cycling. Privacy also plays a role in that decision making for many people. At the same time, a large number of people indicated that apps (can) offer valuable information and that this is a reason for them to use them. All in all, we can state that people are not yet tired of apps and are generally happy to use them as long as they offer sufficient added value. 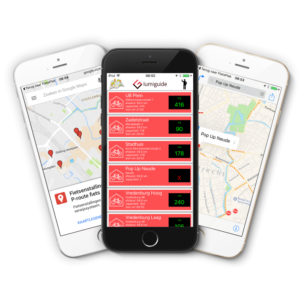 All the cycling apps listed above are purchased by consumers (for payment or not) to help them plan or participate in their trips, but the data collected by these apps can also be useful for local governments to improve their cycling policies. For example, shared bike apps can provide useful information on the use of shared bikes, the locations of free-floating bikes, and in some cases, the routes travelled and speeds. Tracking apps can provide valuable information about routes taken, speeds (including speed differences), delays, and, by a clever combination with census data, can also share details about the use of the entire network. Traffic Light apps can also be used to measure speeds and locations and (theoretically) to chart the number of red-light interruptions. With notification apps, a municipality can get feedback from cyclists regarding unsafe situations, socially unsafe locations, bad road surface, bollards, etc. In short, various apps could provide useful information, but at present municipalities and provinces are making little use of them.

The back end of the app

Making use of this data can be a challenge. A good data reflex helps to identify opportunities in time and to cash in on them (see our article on the data reflex here). However, this only applies if the party who wants the data has control over the app, which is not always the case. The result is that governments are increasingly buying this type of data.

This is not surprising because rolling out their own app can be quite a challenge. In addition to realising the app itself, you also have to think about details such as maintenance and the back end. How, for instance, does the government deal with notifications from the app? How do you integrate them into your existing processes? And how do you provide employees with the right information? The sustainability of apps can also be a challenge. Certainly, with gamification apps, it is important not only to attract users but also to retain them. This must be taken into account in order to prevent apps from not producing the effects and data we hope for.

In summary, we can state that cyclists are certainly not yet app-weary, but they are app-critical. A successful app must fulfil a need for users and the costs (effort, privacy concerns, battery usage, etc.) must outweigh the benefits of this need. As an app provider, this requires you to look not only at functionalities, but also at the usefulness and the experience for the end user. In addition, it is important to consider the potential value of the data generated, either as the main purpose or as a by-product. What can this data be used for and can it (whether in exchange for payment or not) be shared AVG-proof with interested parties? In this way, the app user benefits not only directly, but also indirectly, by allowing governments to improve their cycling policies and developers to develop new applications.