A SnifferBike to measure route usage and air pollution?

On 4th December 2019, William Dogger, Alderman Mobility of the city of Zwolle (NL), mounted the first sniffer sensor on the bike of an inhabitant in Zwolle. It symbolized the kick-off of the SnifferBike (SnuffelFiets in Dutch) pilot in Zwolle, a partner of the Bicycles and ITS (BITS) project. The aim of the pilot is to get insight into the most frequently used and ‘cleanest’ cycle routes. Indeed, the sensor measures the amount of particles in the air. It also measures the speed and delays on routes. 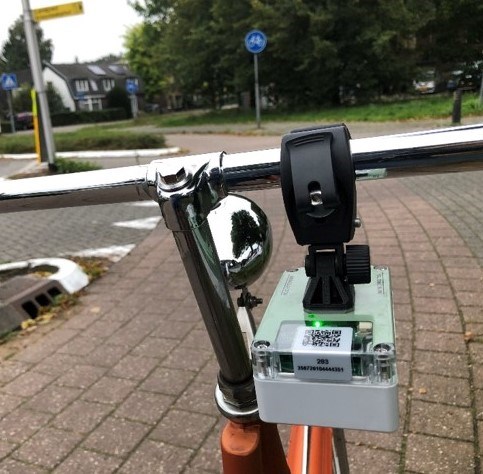 As a start, ten cyclists from the neighbourhood of Stadshagen, which counts 25’000 inhabitants, in Zwolle will participate in the pilot. The participants have been recruited from the existing Senshagen project, which is a citizens science project focused on climate change and climate adaptation. The SnifferBike pilot participants will make their normal cycle trips with the mobile sensor attached to their bike. All data is then anonymized and aggregated to create a so-called heatmap of the cycle trips. Participants are able to see the results on their personal web page. We hope to raise the number of participants over the next couple of months. For more detail, read the extensive article published in the regional and local newspapers (only in Dutch).

The SnifferBike pilot is part of Zwolle’s ambitious mobility plan to raise the amount by 20% in the next 10 years. Numerous pilots will be implemented in 2020 and 2021 to reach this target. The overall goal of the city of Zwolle is to stay an international front runner on cycling as a world bike city – it already has the highest bike use in the Netherlands.