ECOSense: how bike sensors can contribute to improve cycle infrastructure

As the Corona pandemic has shown, there is a growing demand in the improvement of the bicycle infrastructure. In order to be able to keep sufficient distance, people are increasingly avoiding public transport and switching to individual means of transport such as bicycles or cars. To avoid that traffic problems in city centers becoming more severe, citizens need to switch to cycling more often. The prerequisite for this, however, is an inviting and attractive bicycle infrastructure.

A better database could help to identify potentials for improvements in the cycle path network. Compared to other modes of transport, the data available on bicycle use is still limited. Initial approaches provide information on the general volume of bicycle traffic, e.g. based on municipal bicycle counting stations. In addition, bicycle apps are increasingly being used to gain insights into bicycle use in a city. However, data from bicycle apps may only be of a limited informative value as these could represent a smaller proportion of cyclists with a tendency towards younger people and leisure time trips.

In order to close this research gap, a bicycle sensor system was developed and tested as part of the ECOSense project in Oldenburg. The sensor is gathering various parameters of sensor data (position, speed, vibration, environment) about everyday bicycle use. The improved data basis is intended to support decision-makers from traffic planning in their work and to make a positive contribution to the optimization of the bicycle infrastructure. In addition, equipping citizens' bicycles with sensors enables new insights into the condition of the bicycle infrastructure and everyday use of bicycles.

As the project has shown, a sensor-based approach can address many groups of cyclists that have not been considered so far, especially elderly people who tend to use bicycle apps less often. In this project, partners from practice and research based in the bicycle city of Oldenburg worked closely together. The two companies Baron Mobility Service GmbH as well as CoSynth GmbH & Co. KG and the University of Oldenburg (Department of Business Informatics VLBA) were involved.

As a bicycle leasing company under the brand mein-dienstrad.de, Baron was responsible for the working part citizen participation: a wide variety of networks were used to attract citizens to participate in the project. As a technology partner, CoSynth was responsible for the conception and development of the sensor platform and the data acquisition and provision. The University of Oldenburg (Department of Business Information Systems VLBA) worked on processing and evaluating the bicycle sensor data.

The project was conducted in close cooperation with the City of Oldenburg. The city in northwestern Germany with almost 170,000 inhabitants is one of the leading cycling cities in Germany - more than 42 percent of all trips are made by bike.

At the start of the project, 200 sensors were developed and produced. The sensor measures the GPS signal as well as the acceleration, position and orientation of the bike. The GPS is used to record the selected routes, but also to determine the speed. The position and acceleration sensors provide information about the roughness of the cycle paths. Environmental data such as air pressure, temperature, humidity and brightness are gathered by the sensor in order to be able to determine to what extent environmental factors influence cycling behavior. The bicycle sensors can be attached to the bicycle in various positions, e.g. on the saddle post, with a Velcro fastener. 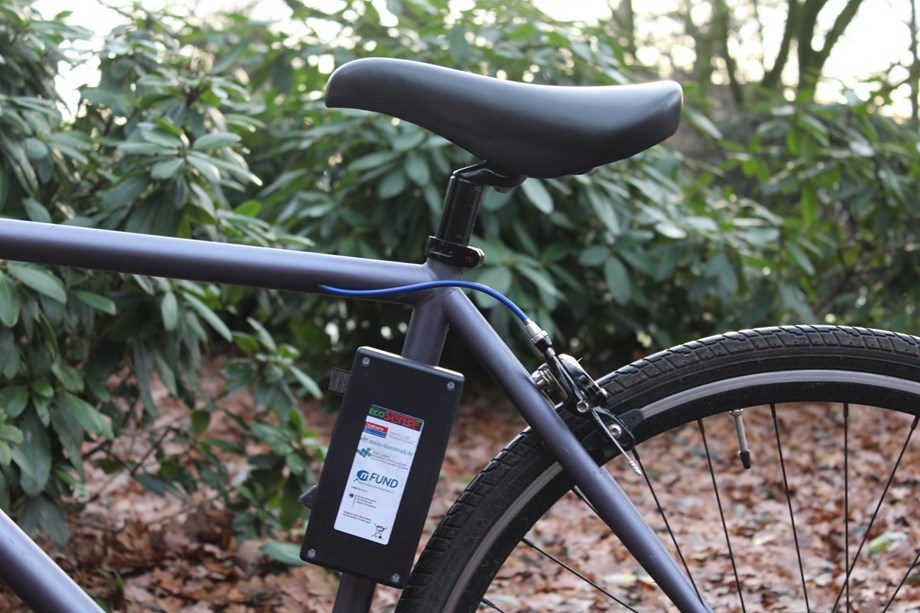 The project has successfully shown that new target groups, especially elderly cyclists, can be reached with bicycle sensors, e.g. compared to bicycle apps. On the part of civil society, there was a great willingness to provide personal data in order to support the municipality in the infrastructure planning process. A total of 523 citizens registered on the official website to participate in the project within a very short time. More than 200 people used the sensors on their bikes for several weeks. The first data collection was carried out from autumn 2019 with around 200 people. From spring 2020, due to the corona pandemic, data was only collected in a smaller (mainly internal) group.

As part of the project, the VLBA department of the University of Oldenburg processed the collected data of the bicycle sensors and evaluated these regarding the route selection, travel times and weather influence. In addition, a comprehensive analysis of the acceleration and speed data was carried out to identify vibrations of the bikes and braking processes.

Cyclists in Oldenburg primarily prefer main roads, however cyclists tend to be slower on main routes (5-10 km/h) compared to secondary routes (> 10 km/h) as they need to brake or stop more frequently at intersections or traffic lights at the main routes. The weather conditions has only little or no influence on the cycling speed, but have an effect on the cycling distances and durations.

Another goal of the data evaluation was to use the acceleration data to gain knowledge about the condition of the infrastructure. Vibrations on the bicycle often occur when a cyclist is crossing a pothole or a curb, which can be recognized by a strong deflection of the vertical axis of the acceleration sensor. A particularly large number of vibrations were identified in intersection areas, e.g. when cyclists cross a curb or when the road surface changes.

The ECOSense project was funded by the German Federal Ministry of Transport and Digital Infrastructure (BMVI) as part of the mFUND funding program. The feasibility study with a total duration of 15 months was part of the funding guideline 1 and had a project volume of 132.713€ (70 percent funding by the BMVI). The preprocessed and anonymized data sets of the project were published on the mCLOUD, the Open Data Portal of the BMVI, as open data for free download. The results were published in the final report. The project partners have successfully demonstrated the feasibility of the ECOSense bike sensor concept and are working on a further development of the approach in the direction of a holistic quality assessment of the bicycle infrastructure.

The cycling data sets can be accessed at the mCLOUD: https://mcloud.de/web/guest/suche/-/results/suche/auto/ecosense/0