Cyclists or scooters that unexpectedly show up at an intersection; Often they present a sudden danger. Motorists see them too late and cyclists are often unaware of their vulnerability. Bikescout from Heijmans offers a solution to cyclists for safer crossing.

The bike landscape changes and is becoming more complex

Cycling is becoming more and more popular: On the one hand stimulated in order to keep the city centers accessible by reducing car traffic and on the other hand due to sustainability challenges. And to stimulate cycling, it is key to facilitate a comfortable and safe environment.

Due to this increasing popularity of cycling and especially the rise of e-bikes and speed pedelecs, we are now facing a new chalenge: How do we manage all this bicycle traffic in a safe way? Because the increase in the number of cyclists and large speed differences between cyclists, lead to more danger for cyclists on bicycle crossings. Especially in combination with poor overview at these intersections.

Extra pair of eyes for the motorist

In order to make motorists more alert and assists them in making the right decision when approaching the intersection/bicycle crossing, Heijmans developped Bikescout. Cyclists are detected and followed by the system when approaching the crossing. A clear warning is then given to the driver at the right moment by means of flashing lights on the road surface. 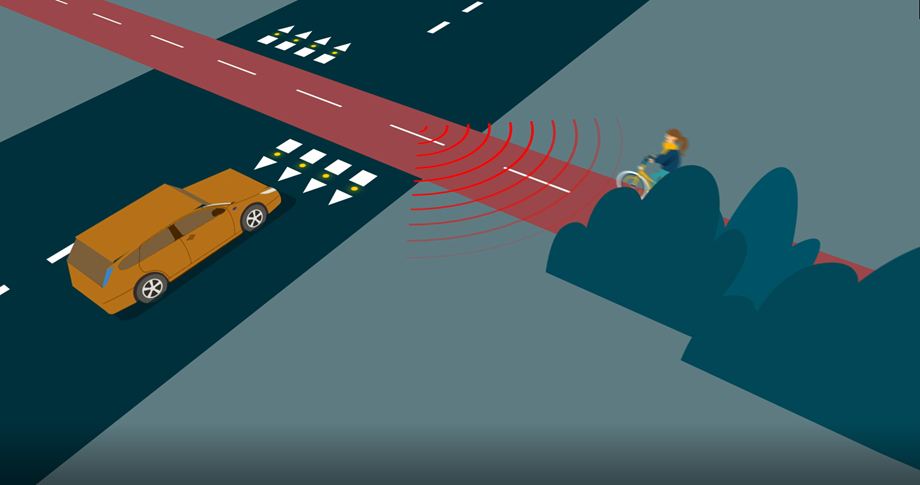 The unique thing that this innovation adds is that all this happens based on the position and speed of cyclists in relation to the bicycle crossing. Whether it is a slow cyclist, a fast speed pedelec, a scooter or a combination of the above: Bikescout always gives the motorist sufficient and the same amount of time to assess the situation and make the decision. This is typically 5 seconds before the cyclist is at the crossing. Even in situations where buildings, vegetation or parked cars obstruct the view of the crossing, Bikescout offers an “extra pair of eyes for the motorist.”

In addition, it is possible to process the bicycle data that Bikescout generates into information. Data such as speed and direction of the cyclists, numbers and intensity on the cycle path can be used for analyses and lead to valuable insights: How is the mix between slow and fast cycling traffic? What are busy times of the day/week? What is the impact if the traffic situation is adjusted?

In short, in addition to making the traffic situation safer, Bikescout can be a valuable tool for better insight among road managers.