12 June 2018 - Published by Cees Meijles
The first steps have been taken towards developing rural areas in the NSR into prosperous areas by realizing Biomass Cascading Alliances (BCA’s). This was demonstrated during the second partner meeting of BIOCAS, which took place from 31 May – 1 June 2018.

The second partner meeting of the BIOCAS project took place in NykØbing on the islands Lolland-Falster in Denmark. The meeting consisted of presentations about the work packages and the progress of the partners, workshops and an excursion to the Visual Climate Center in Holeby.

The first day took place at the Center for Vocational Education Lolland Falster (CELF), Nykøbing Falster. The goal of this day was to get an overview of the progress of the project and to work on the exchange of results and cooperation between several work packages.

We were welcomed by Ole K. Larsen, 2nd Deputy Mayor of the Municipality of Guldborgsund and Mikkel Wesselhoff, CEO of Business Lolland Falster.

After an introduction by Nicholas Barnes and Ivar Dencker, both teachers at CELF, we could taste a new product developed by students. They made it in relation to the BIOCAS project. After tasting the products of the proud students, presentations about how to make a success of a EU-project were given by Morten Karnøe (Stanford University) and Peter Lindgren (Aarhus University). Peter urged us to just start working on activities, so we did. The partners worked, divided into 5 groups, on the first steps towards BCA building.

After lunch presentations were given by several partners. About all various subjects. Such as vegetable dyes from all sorts of trimming, festival cups and a biobased composite bridge.

In the evening we had 3 very interesting presentations about the sustainability activities of Carlsberg, conservation agriculture and how to make a festival more sustainable by using a bio-based festival cup. The beer tasting and the delicious food made the evening complete.

The second day we met at the Visual Climate Centre in Holeby. The goal of this day was to get an overview of the progress of WP 4 and 5 and make arrangements during the steering group.

The Introduction of day 2 was by the province of Fryslân. Followed by presentations about WP 4 and WP 5 by Jerke de Vries and Mette Jørgensen:

After some spare time we were given a tour at the visual climate centre. Again we were confronted with the impact of climate change on the planet and thus also on our regions. This showed us that the BIOCAS project is very relevant. 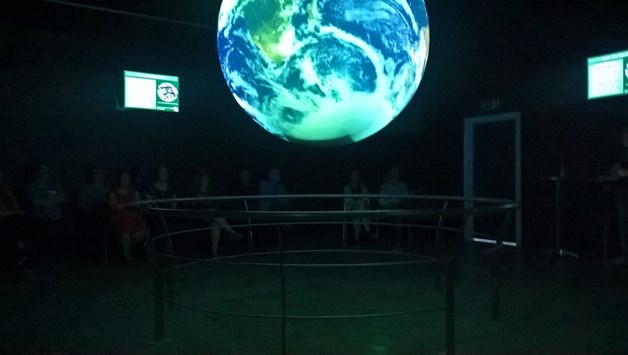