In February, the Municipality of Dordrecht in The Netherlands hosted a workshop for the BEGIN partners: Cities of Antwerp, Ghent and Bradford. With these partners, Dordrecht has an intensified collaboration within the BEGIN project. The workshop included a 'bike safari' to the Vogelbuurt neighbourhood. This part of the city gets its name (in English: 'Bird Neighbourhood') from the streets named after bird species. Let's take a closer look at the Vogelbuurt, Dordrecht's pilot project for BEGIN.

Ellen Kelder, who initiated the BEGIN project, is enthusiastic about Dordrecht's pilot project, "It encompasses all aspects of BEGIN: climate adaptation, more blue and green infrastructures, social innovation, it all comes together in the Vogelbuurt." 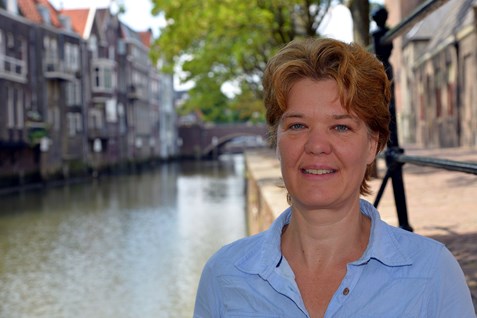 It is an old neighbourhood, built in two periods. The first houses were built in the thirties of the twentieth century. The other houses were built shortly after the Second World War, in the fifties. There was a huge housing shortage and a lack of building materials. The main objective was to build as many houses as possible, as quickly as possible, at the lowest cost. This resulted in a high density of low-quality housing. Most of the houses in the Vogelbuurt are social houses owned by housing corporation Woonbron. Today, these houses are seventy years old and do not meet the demands of tenants any longer. The houses are tiny and have poor energy efficiency, due to the fact that they are not well insulated. They need refurbishment to become life-course proof.

As a result of the changing climate, the Vogelbuurt encounters problems resulting from intense rainfall, inundation, flooding, heat stress and severe soil subsidence. The neighbourhood is dominated by conventional grey infrastructure, with less possibilities for infiltration. The implementation and improvement of blue green infrastructure is needed to cope with the results of climate change. Green areas located in the east side of the neighbourhood can be part of the solution. These green areas consist of urban parks and sports fields and serve multiple purposes: climate adaptation, leisure, and sports activities.

From a social demographic perspective, the neighbourhood is characterised by the presence of many people who depend on social welfare, and people who need special care and assistance. There are also several groups of immigrant residents, including political refugees. Many people belong to the lower income groups and they often have a poor social network. Unemployment, sometimes resulting from a lack of knowledge of the Dutch language, is a significant social problem here.

The expectation is that a revitalisation of the Vogelbuurt, by improving the housing stock and tackling climate issues, will also have social economic impacts. Citizen involvement is an important aspect in all perspectives of creating an attractive living environment: climate adaptation, housing, job creation and sports/leisure.

The 'Vogelnest' (Bird's Nest) is the neighbourhood's own organisation for social work. Ellen Kelder says, "To make this project successful we have to impose it from above, but when it comes to actually building it, we have to work bottom-up. Therefore, citizen involvement is so important. We involve all relevant public and private stakeholders. Having a strong social partner such as the Vogelnest is crucial. They know how to reach the local residents, how to make them enthusiastic, and how to empower them. They are an important stimulator for citizen involvement, and social participation in paid and volunteer work. With its presence citizen involvement is guaranteed, and well organised." 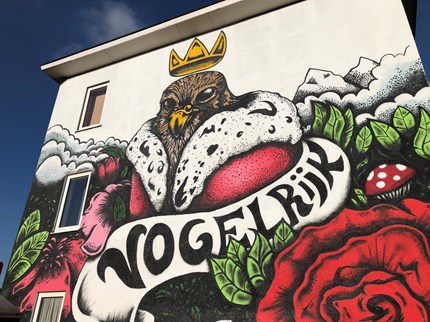 One of the initiatives of the Vogelnest is the mobile coffeebar in a former sea container on the central square in the neighbourhood. People can come here freely to meet other people, to network and to gain work experience, both paid, or on a voluntary basis. Whether it be participation in mural paintings, cooking for the neighbourhood, maintaining the green infrastructure, demolition and construction work, involvement in sports activities, or taking care of each other.

Ellen: "We want to implement good governance structures and approaches that support these examples of bottom-up resilience and capacity building at neighbourhood and community level".

Housing corporation Woonbron will demolish 280 of the current outdated houses in the next three years and replace them with 66 new family homes. Another partner here is New Horizon, a circular demolition company. They aim at reusing the demolished building materials, while at the same time creating jobs and work experience through apprenticeships for the local residents. The new homes will no longer use gas, and will be connected to the district heating infrastructure of waste disposal company HVC.

When it comes to water safety, most houses will be equipped with roof windows. This is important, since this part of the city, though protected by dikes, lies far below sea level. In the future, the Vogelbuurt will contain much fewer houses, and will have a more 'airy' spatial plan design, with a more dominant role for green infrastructure. One element is the development of a green corridor towards the sports fields at the east side of the neighbourhood. Thus, the Vogelbuurt will be connected to the main blue green infrastructure of Dordrecht. Residents could be involved in maintaining the green area.

The idea is to provide workshops on sustainable garden design, and provide possibilities for urban agriculture. Ellen: "When it comes to increasing social awareness of climate-related hazards we want to invest in citizen engagement, and participation in our urban adaptation projects." 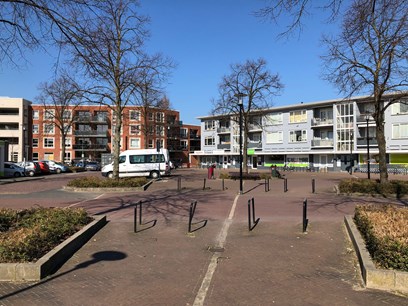 The Vogelbuurt has a severe soil subsidence problem. Also, flooding occurs in the adjacent neighbourhood 'Indische Buurt'. This neighbourhood contains privately owned houses. There are several owner initiatives to combat the flooding. What are the municipal plans here?

"Our approach includes climate risk and vulnerability assessments, in addition to flood and heat risk management plans", Ellen points out. "We want to develop blue and green infrastructure, which should lead to improved water retention and urban drainage. One other suggested idea for the Vogelbuurt when it comes to reducing the flooding, is the application of glass wool.  Also, the sewage system will be updated so it becomes climate resistant. We want to build standards for this purpose."

Quite a lot is going on in the Vogelbuurt. Ellen summarises, "adaptation to climate change, sustainable use of land and nature based solutions, creating an attractive blue green living environment, energy transition, job creation in the local economy to fight urban poverty, inclusion of migrants and refugees, circular economy, and in all these aspects citizens will be involved in various ways.

"There is a lot of enthusiasm among all parties involved. In order to make this a success an integrated and coordinated approach is required, both in aligning design and planning, and in collaboration when implementing all the measures."

We should avoid stepping in the trap of what is called the 'pilot paradox'. Ellen explains: "You know what people say: 'Pilots never fail, but they also never scale'. The idea behind a pilot is that it will be continued, and that the results should be applicable to situations elsewhere. In other words, we have to make sure that we educate the right people, or transfer our knowledge to the right people, so we equip them with the right tools and expertise so they can continue the project on their own."

In this respect, another BEGIN partner helps us avoiding the pilot paradox: the Erasmus University in Rotterdam, along with another partner: Deltares. The latter is an independent knowledge institution for applied research in the field of water and subsurface.

Ellen is confident: "We expect we will be able to share our knowledge with other cities, both nationally and internationally, in particular with our BEGIN partnering cities, since there are many comparable neighbourhoods throughout Europe."