During a nine-day summer school (27 August – 4 September 2018), students will explore the design challenge for a number of green climate axes in Ghent. This exploration will cover different scales (axis, neighborhood, cross section) and will deal in a multidisciplinary way with urbanistic, green management, landscape and biological issues. The summer school, organised by University College Ghent, KU Leuven and the City of Ghent, is intended for 25 students in architecture, urbanism and (spatial) planning, landscape architecture and development, biology, bio-engineering, green management or related disciplines.

Already at the end of the 1980s, the City of Ghent introduced the concept of ‘green axes’ as connecting elements within a city-wide green structure. The axes were meant to provide in an optimum distribution of existing as well as new recreational elements: more intensive recreational elements such as sports grounds, and more extensive recreational uses such as hiking, jogging and biking, water sports, allotment gardens, residential recreation, larger and smaller green infrastructure at neighborhood level and agriculture.

Next, the construction of underpasses and bridges should guarantee uninterrupted separated bike and walk ways along these axes. Eight green climate axes are currently mentioned, covering more than 50 kilometers throughout the city. They form a coherent ensemble with five massive green poles in the fringe and with the green recreational rings in the city. Some of them are planned in specific land use plans, parts of other axes are already realized on the field through specific green development and management projects or as an addition to infrastructural projects.

Some of the green climate axes are visible today, such as GKA3 and GKA5. Some green climate axes, however, remain a real challenge. For GKA1, GKA2 and GKA8, the search for a qualitative trajectory is still open... GKA7, on the other hand, runs through a very built-up area. 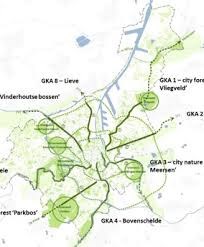 It has become very clear in Ghent that it takes much time and a lot of small and fragmented actions and projects to make green climate axes become real. Research by design combined with a grounded vision on the future green management is a key element in the development of these axes. Plan defines the following starting points:

The summer school acknowledges these starting points for the research by design of green climate axes. However, the exploration of the axes will cover a wider area as the ambition is to assess the current and future potential to embed and integrate the green climate axes maximally within the urban tissue.

That is why the summer school will explore possibilities in adjacent neighborhoods, within a distance of 300 meters on both sides of the central water or green infrastructure, to create a coherent ensemble of green and blue elements that penetrates in and interweaves with the built environment. The potential to keep or add green public and private elements, to unseal surfaces, to add water, bike and walk infrastructure will be explored.