Development of a new borough

At the City Architect’s office, the area of Mindemyren is being developed as a building set. Mindemyren is a large and challenging urban development area on the outskirts of Bergen city centre. An area plan has been authorised to facilitate a new build development measuring 550,000 m2.

Bergen Light Rail will run through the area and the current underground-flowing canal will be excavated to bring it to the surface. In addition, 35,000 m2 have been allocated to new plazas and parks. From all this, Mindemyren will emerge as a completely new borough.

The City Architect has created a model of Mindemyren. Models are not anything new in urban planning, however this one is special due to its creation in the form of a building set.

Buildings can be replaced along the way 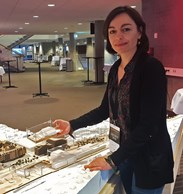 The final plan for Mindemyren has not yet been completed and the model, composed of 25 development areas, is therefore not fully built. For each area, developers can create their own building models and streets, and then take them to the City Architect and place them in the main model similar to Lego bricks. It’s a fun way to carry out urban planning, but the model is not a toy: “The model will make it easier to see individual projects in context,” says Celine Blanc, a senior architect at the City Architect’s office.

The intention is that the model will be a planning tool for developers, and the various municipal agencies and administrators. The City of Bergen has an ambition to create a green urban area that is good to live in, whilst simultaneously facilitating businesses and the creation of potentially 20,000 new jobs. The model should form the basis for discussing the character of the area; the quality of living and architecture says Blanc. “All actors must be aware that they are part of the larger picture and everyone must be involved if the ambitions for the area are to be realised," she says.

Will be used for many years in the future

The City Architect hopes the model will captivate designers, developers, politicians and other stakeholders. When it was recently shown at the Urban Development Conference, seven of the 25 development areas had been constructed with new buildings made of cardboard and plywood.

None of these proposals are approved regulation plans, but the model buildings show the current concepts of the people putting forward such proposals. New proposals can be added and removed from the model allowing different alternatives to be tested visually and intuitively. The model is now at the City Architect’s office in Domkirkegaten. It is intended that this will be used in the future until Mindemyren is fully developed.

Adaptation to the climate and sea trout

Mindemyren is the City of Bergen’s case in the EU project BEGIN: ‘Blue Green Infrastructure through Social Innovation’. The model is financed by the project. The main objective of using blue-green infrastructure, i.e. open waterways and planted areas is to make cities more resilient against climate change.

At Mindemyren, the most important measure is the opening up of the canal. By replacing underground pipes with a risen canal on the surface, it will be easier to handle floodwater. In addition, the aim is to create a beautiful canal to enhance the quality of the area. It is hoped that sea trout will one day swim in the canal at Mindemyren. 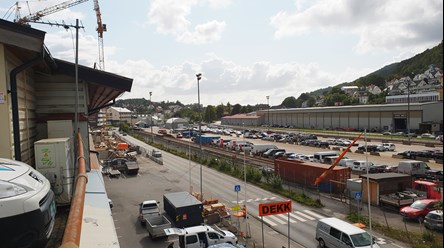 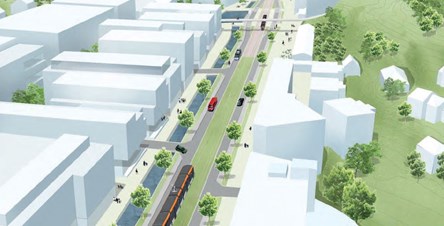