Bradford welcomes Antwerp, Ghent & Dordrecht to discuss the regeneration of the city

Last week, partners from Antwerp, Ghent and Dordrecht made a return visit to Bradford, as part of BEGIN’s City2City learning. They visited Bradford’s pilot site and discussed the city’s main ambitions and concerns.

To kick off the first day, Saira Ali, Bradford’s team leader on Landscape design and conservation, provided context for the visiting partners, recounting how the wool industry made Bradford one of the richest cities in Britain and how its subsequent decline has produced huge challenges for regeneration.

She also introduced the ambitious Alsop masterplan (2003) and it’s ‘3 fingered hand’, which has provided inspiration for the city centre Mirror Pool and the linear park in Bradford’s case study area of Shipley and the Canal Road Corridor. 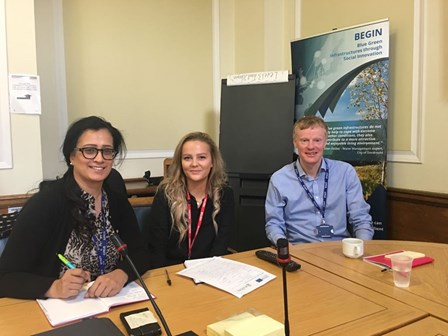 An introduction to the case study area, focusing on incorporating blue-green infrastructure (BGI) to create a linear park, provided an opportunity to revisit issues raised during the previous visits to Antwerp, Dordrecht and Ghent and to peer review Bradford’s case study.

The Bradford partners also took advantage of the unseasonably mild and sunny weather to visit the Canal Road Corridor site. During the visit, council engineers and planners were joined by Barney Learner of Friends of Bradford Beck, a community group promoting a cleaner re-naturalised Bradford Beck, to describe key challenges of the development proposals which include highway improvements, housing and possible flood alleviation measures.

The day ended with workshops hosted by JBA Consulting, who have been involved with flood risk assessments along the Canal Road Corridor. They demonstrated how various flood risk scenarios can be dynamically projected onto the 3D Physical Augmented Relief Model (PARM), to effectively visualise the extents and progress of a flood event.

Finally, partners discussed how Shipley and the Canal Road Corridor might be rebranded to promote a local identity for existing and future communities and to raise the profile for its blue-green initiatives. 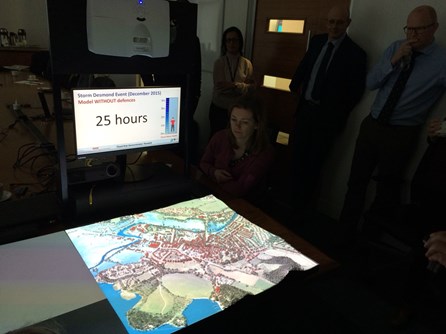 On the second day, workshops held in City Hall were devoted to aspects of masterplanning, including adaptive planning and how to incorporate resilience and robustness within Bradford’s plan to cope with uncertainty from challenges, such as climate change.

Partners looked at Urban resilience and the capacity of urban systems, communities, individuals, organisations and businesses to recover their function and thrive in the aftermath of a shock, change or stress, regardless of its impact.

A key aspect of the BEGIN project for Bradford, is the enhancement and naturalisation of Bradford Beck, involving communities in the design and delivery of Green Infrastructure along the corridor, using BGI as a tool for engaging new and existing communities and mitigating the impact of climate change through developing a better understanding of BGI and to manage and reduce flood risk.

Saira Ali said, “For us, BGI is the catalyst for transformational regeneration and connecting these different elements and spaces. Through our involvement in BEGIN, in particular the city2ity learning opportunities, we hope to ensure BGI planning and delivery form a key component in delivering sustainable open spaces, not only along the corridor but around the district.

“This is not a stand alone project and the council’s key priorities are embedded in every aspect and will be built in with multi benefits. BEGIN brings all the different elements together to deliver these priorities.”