In September, BEGIN partners have visited Enfield and Kent to see their pilot projects of how they manage surface water flooding, reduce the impact of climate change and create attractive spaces for communities.

The first stops were Firs Farm Wetlands and Pymmes Park Wetlands in Enfield. Both pilots have been hugely successful in not only protecting the homes around them from flooding and creating havens for wildlife, but also in creating vibrant social hubs for sport and other activities. 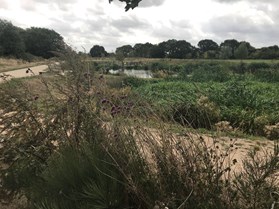 In addition, the partners were shown the rain gardens along Enfield’s new Cycle Enfield scheme. These small landscaped features have a significant impact on drainage systems which would otherwise struggle to cope with excess rain water.

Enfield Council’s Cabinet Member for Environment, Cllr Guney Dogan, said: “We are extremely proud of the work in Enfield to manage residual pollution, to build flood relief schemes and to protect the environment and people’s homes. With our partners at BEGIN, we are continuously learning about and enhancing existing mitigation measures while involving the community at every stage.”

After visiting Enfield, the partners went on to Kent to visit the pilot projects in Sittingbourne and Margate where they developed a new approach to tackling surface water flooding and climate change by co-designing urban green spaces with residents. 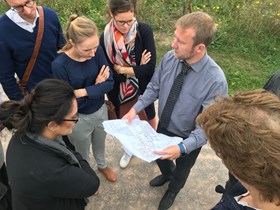 Extreme temperatures experienced throughout Europe during the summer have demonstrated the short-term impacts of a changing climate, with both people and wildlife severely affected. However, the high temperatures experienced could soon become the norm resulting in more intensive thunder storms which bring about severe flooding which are towns and cities are currently unable to cope with.

Max Tant, Flood and Water Manager at Kent County Council said “We’re finding that the intensity of the storms we experience is resulting in more urban flooding which is becoming increasingly difficult to manage. BEGIN is helping us to explore options for small areas of urban green space to come up with innovative ways of delivering mitigation measures and long-term maintenance with communities’ engagement and involvement.”

Read more about the pilot projects of Enfield and Kent.