A glimpse into the future: Mindemyren in 2022

13 February 2020 - Published by Ellen Kelder
The Mindemyren area of Bergen will undergo a huge transformation over the next two years, turning the heavily trafficked grey area into a green urban space for citizens to enjoy. For a glimpse into its future, watch this new animation from BEGIN partner Bergen Kommune.

This new animation from Bergen Kommune shows how the Mindemyren area of Bergen could look in 2022. The whole area will be redeveloped, in parallel to the construction of a new line of the Bergen Light Rail, which started in September 2019.

The canal, which is currently underground, will be opened up and vegetation that naturally grows along rivers and streams will be introduced. The greenery won't just be for decoration but will be able to absorb stormwater.

A development plan including 550,000 square meters of new buildings has been accepted for the area. The plans have also set aside 35,000 square meters for new squares and parks. The goal is to create a landscape with room for everyone, without high fences or other barriers.

For a glimpse into the future, watch this new animation from BEGIN partner Bergen Kommune. 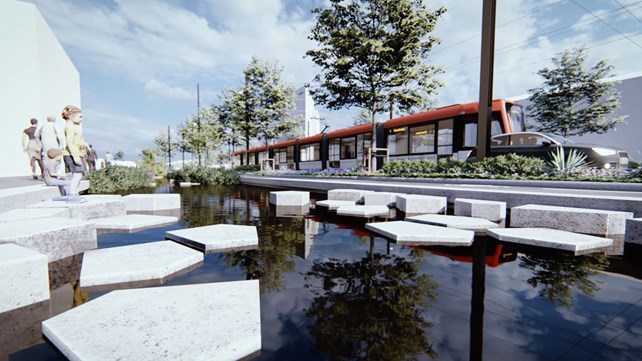