Scottish city Aberdeen strives to be “a place where all people can prosper” and the city council knows that overall quality of life is key in creating a truly sustainable, liveable place. One of the principles of Aberdeen City Council’s policies is to enhance blue and green infrastructure (BGI) across the city. BGI provides multiple benefits for residents as well as the environment including managing flood risk, increasing water and air quality, enhancing biodiversity and improving health and wellbeing.

With the right designs, in the right location and where maintenance and ownership are addressed, BGI can become an essential and cost-effective part of city infrastructure.

One of Aberdeen’s Blue and Green Infrastructure projects is the Maidencraig Flood Management Wetland Scheme which was partially funded under the BEGIN project (Interreg North Sea Region). One of the main drivers of this pilot project was an objective set by the North East Local Flood Risk Management Plans and the Surface Water Management Plans to manage flood risk, as required under the Flood Risk Management (Scotland) Act 2009. It was designed to help save houses and businesses in the neighbourhoods downstream from being flooded. During the project, other objectives were also targeted, such as enhancing the environment, amenity, improving accessibility to the site, and helping with residents’ health and wellbeing.

In the Den of Maidencraig Local Nature Reserve, the walking and cycling paths were improved and a new pond dipping platform was installed. The City Council’s Countryside Ranger Service provides schools with the opportunity to discover more about the wildlife in the city and activities such as pond dipping introduce children to the world below the water and the complicated food webs which make this particular area so interesting.

Recent additions to the area include the following: 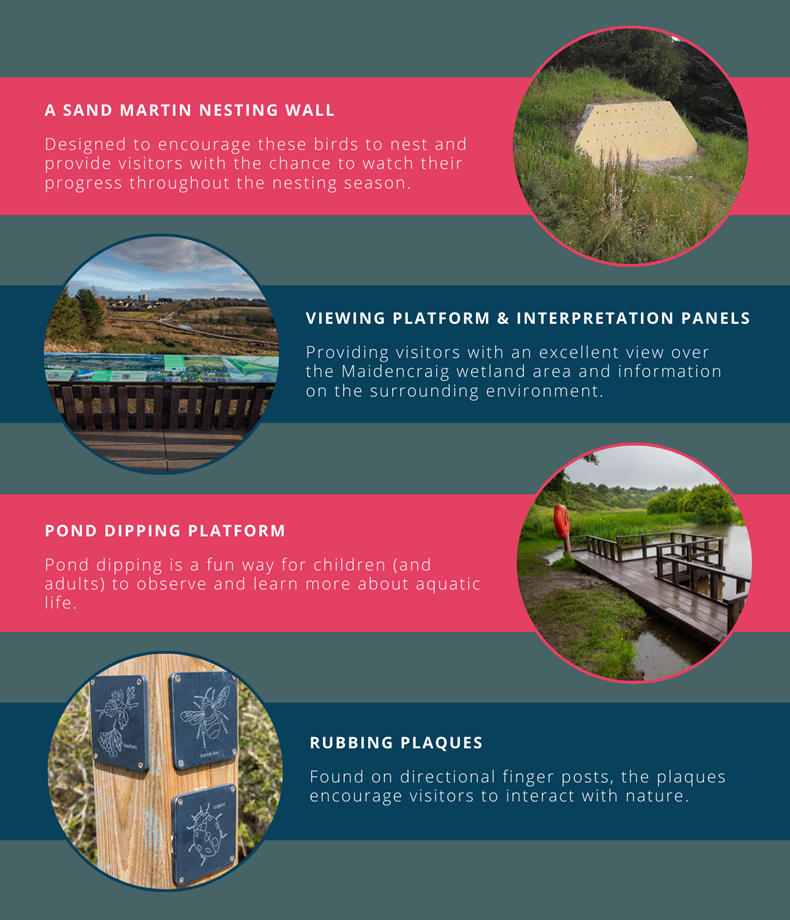 Thanks to funding from BEGIN, SUSTRANS, Aberdeen City Council and Bancon Homes, a safe route to school path between the Maidencraig housing development and Hazlehead Academy has also been incorporated into the overall improvement scheme. This has helped reduce flood risk downstream in the area and created a new home for nature by forming a wetlands area.

The work included the creation of a new path, construction of earth banks, relocation and opening up of the tributary burn to create space for nature, installing new lighting, and replacing the temporary bridge over the Den Burn. The path was built on top of an earth bank which is about two metres high and about five metres wide, with shallow sloping sides. 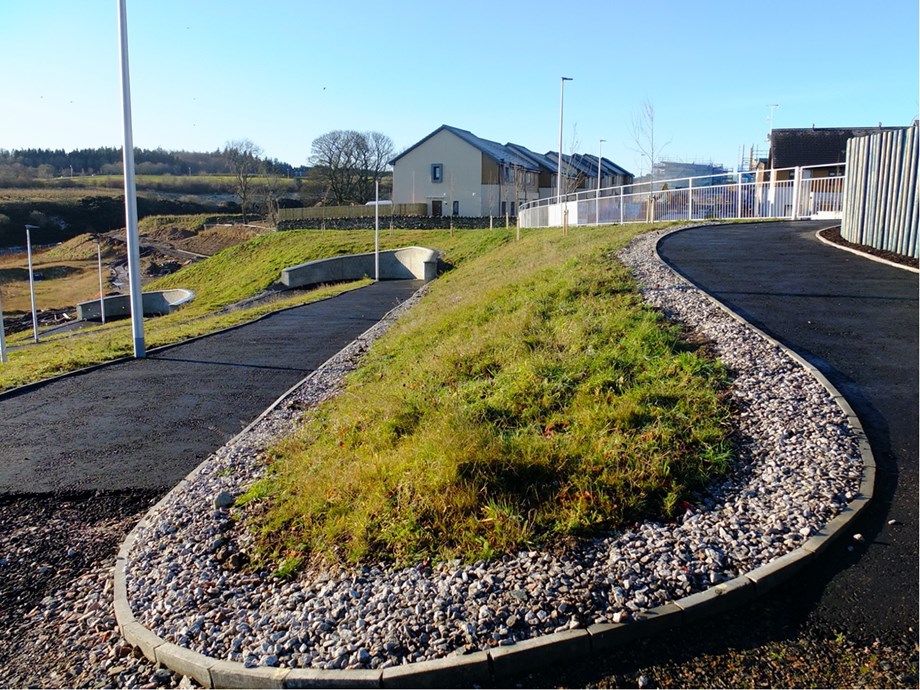 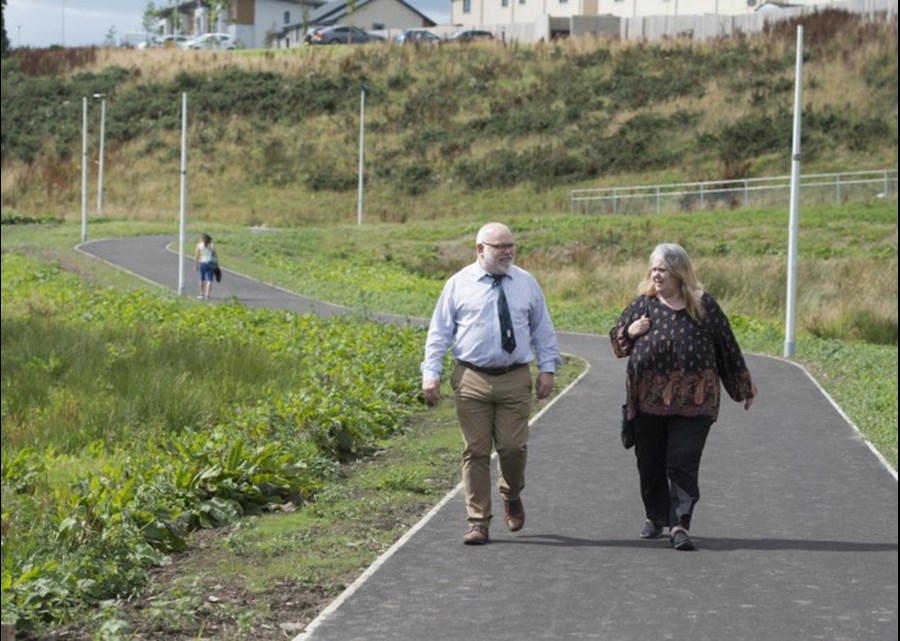 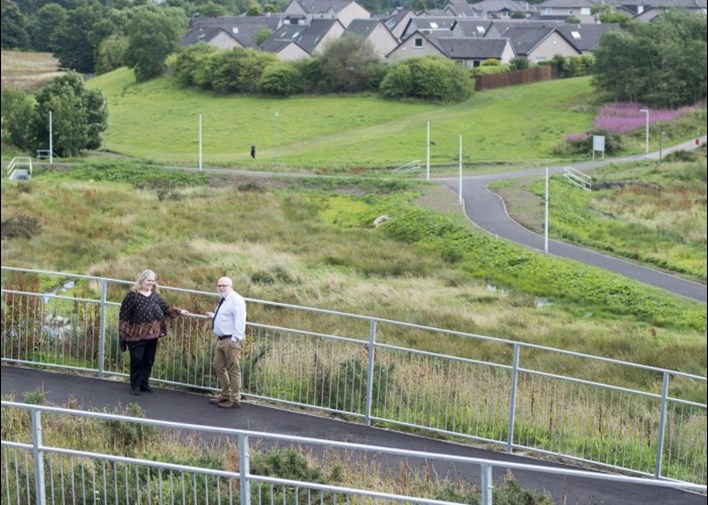 In order to safeguard properties downstream from flooding, the bank has also been designed to hold water back in storm events to a depth of up to one meter. This was achieved by replacing the temporary bridge with a bund that incorporates a large drainage pipe underneath. This aims to slow the flow of water in the Den Burn, allowing it to temporarily flood across the boggy area of the Den of Maidencraig during storms. 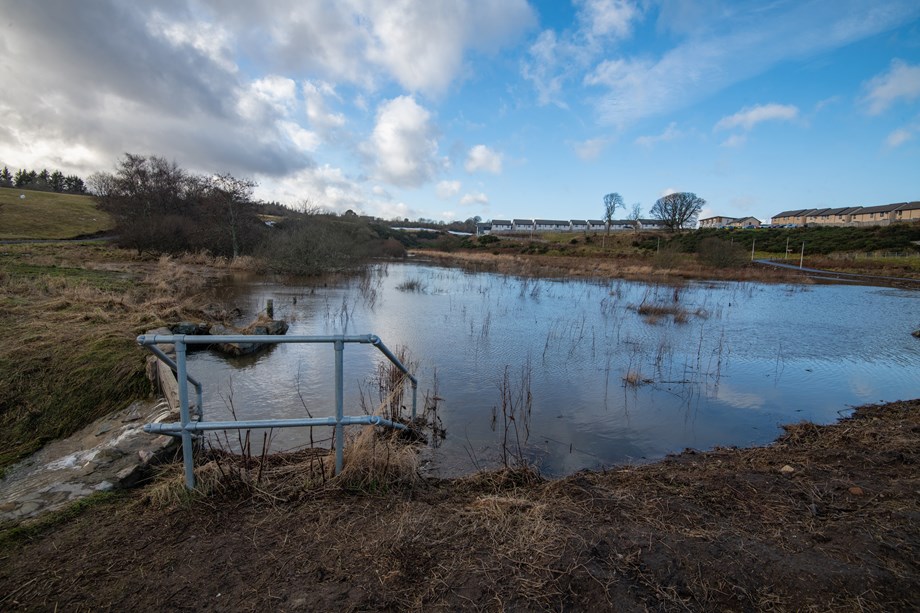 As part of the works, the culverted tributary burn coming down the hillside from the Lang Stracht was diverted and brought to surface to improve the habitat for wildlife.

The scheme, built upstream of an area of Aberdeen which was badly affected by flooding in March 2018, will add resilience along with the nearby Stronsay Park flooding scheme to protect dozens of properties downstream. 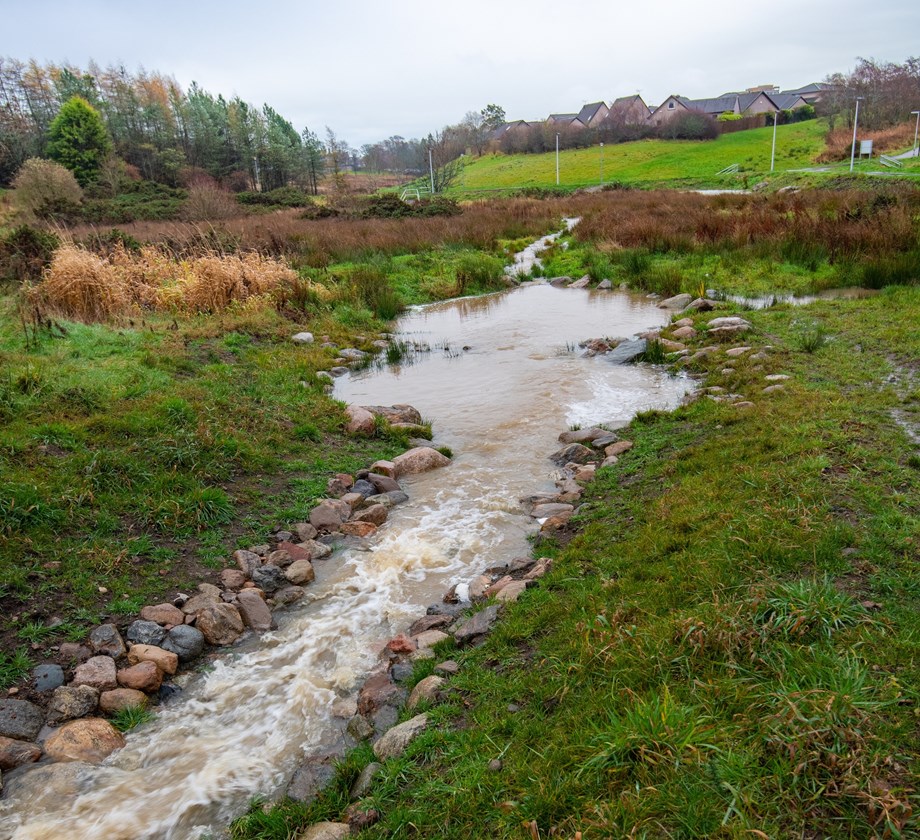 The Stronsay Park scheme was built in 2015 and was designed to store water during storms to protect properties downstream, as well as improve the environment. Stronsay Park holds more than 30,000m3 of water - the equivalent of 80 swimming pools - and was the first of the schemes around the Den Burn to be constructed.

Through the Sustrans Places for Everyone funding scheme, the quality of the cycle path infrastructure was improved, making it easier for school children to cycle to school. The path provides useful links between schools, community areas, the general hospital, straight to the Den of Maidencraig Local Nature Reserve and to the site as a green space itself.

Aberdeen City Council is committed to being a climate-positive city and wants to help lead the world through the rapid shift to a net zero future. This will be achieved through delivering climate change actions on the city scale, working with both external partners and businesses and playing their part in their organisation. The council has already set out ambitious goals for Aberdeen in the Net Zero City Vision, which include actions for other organisations in the public sector. The council’s Climate Change Plan 2021-2025, which has recently been agreed, aims to show early leadership in transitioning to net zero through their own assets and operations and improving Aberdeen’s climate resilience.

The plan sets out the scope of the city council’s ambitions with net zero and interim targets for a reduction in carbon emissions. It highlights climate risks affecting the council and outlines the project priorities across five themes being taken forward to 2025. Aberdeen is already progressing as they have an award-winning green fleet which has boosted numbers of electric and hydrogen vehicles as part of a wider replacement programme. Their plan extends their existing district heating networks and includes new on-site energy systems for new and existing schools, council buildings, their Gold Standard new council house building programme, and includes a project to learn about retrofitting their housing stock.

Aberdeen is looking forward to the future, working with public and private sector partner organisations and companies to achieve net zero, and executing even more blue and green projects to tackle climate change. 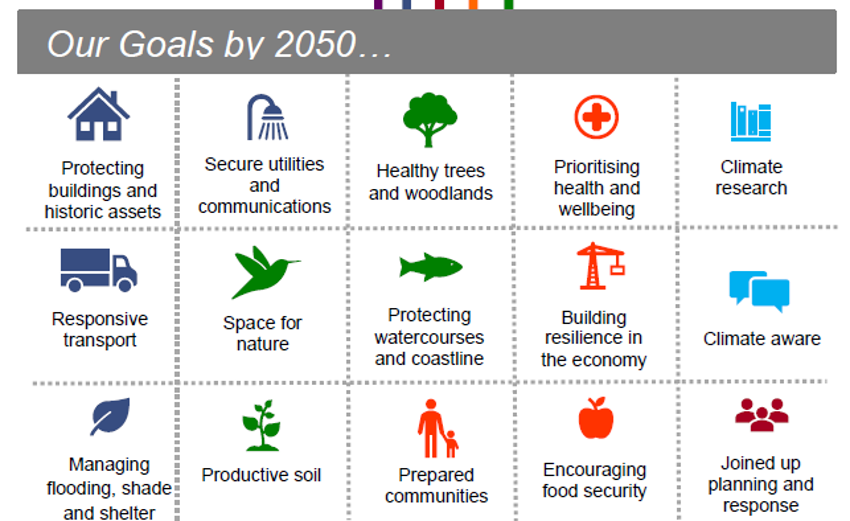