In the first year of the project we have developed 27 new seed mixes targeted at the types of pollinators required by the crops or to support pollinators in forage crops. These were established at 65 sites comprised of orchards (apple, plum, cherry), soft fruit (strawberry, raspberry, blackberry, blackcurrant), grassland or arable crops. Some of these sites will be used for knowledge exchange events in future years. We have started testing the extent to which these new habitats encourage pollinators and levels of pollinators and other beneficial insects in the adjacent crops (apple, strawberry, cherry). These evaluations will also include measurements of yield and crop quality. The extent to which existing field boundary habitats encourage pollinators and pollination was tested for field beans in Belgium and the UK.

In forage crops (lucerne, grassland) different cutting regimes are being tested that will ensure longer supplies of flowering plants. We have developed protocols for measuring levels of pollinators and pollination and evaluated these extensively in fruit crops (apple/pear, strawberry, cherry), arable crops (oilseed rape, fields beans) and grassland. We reviewed the evidence and compiled a database to identify the most important pollinators of the main crops grown in the NSR and for a wide range of wild plant species. This will help us further refine our seed mixes.

To identify where more flower-rich and bee nesting habitats are needed in the landscape, two landscape models are being developed. One will predict the level of pollination service and the code for this has been written. The other using an existing App and assesses the capability of the landscape to support bumblebees.

We have started compiling information on the range of agri-environment measures available in each partners country to encourage pollinators to help identify where improvements can be made. 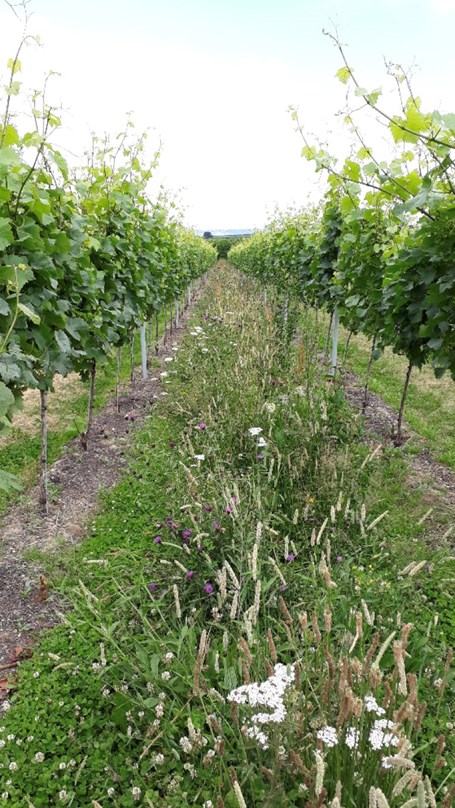 NIAB EMR have developed 10 new mixes for horticultural crops. Five were established on the experimental farm adjacent to apples, plums, strawberries, raspberries and blackcurrants and five on commercial apple orchards. The effect on pollinators, crop pollination and crop yield is being measured.

VLM has seven new mixes and these have been established across 4 demo areas (Frontzate, Herzele, Grote Nete and Mielenbos) at 90 sites encompassing 31 farms. Another mix was designed and established in the orchards of seven sweet cherry growers for demonstration purposes agricultural school and organic farm. The use of the mixes by pollinators in the 4 demo areas is being monitored by Natuurpunt Study.  The University of Ghent is measuring use in the cherry orchards and measuring levels of pollination.

On three other farms, the University of Ghent has established six seed mixtures and are investigating foraging patterns of bees.

On one farm, Inagro is evaluating how the time of cutting effects the time of flower availability in alfalfa (lucerne), a pollinator supporting crop. 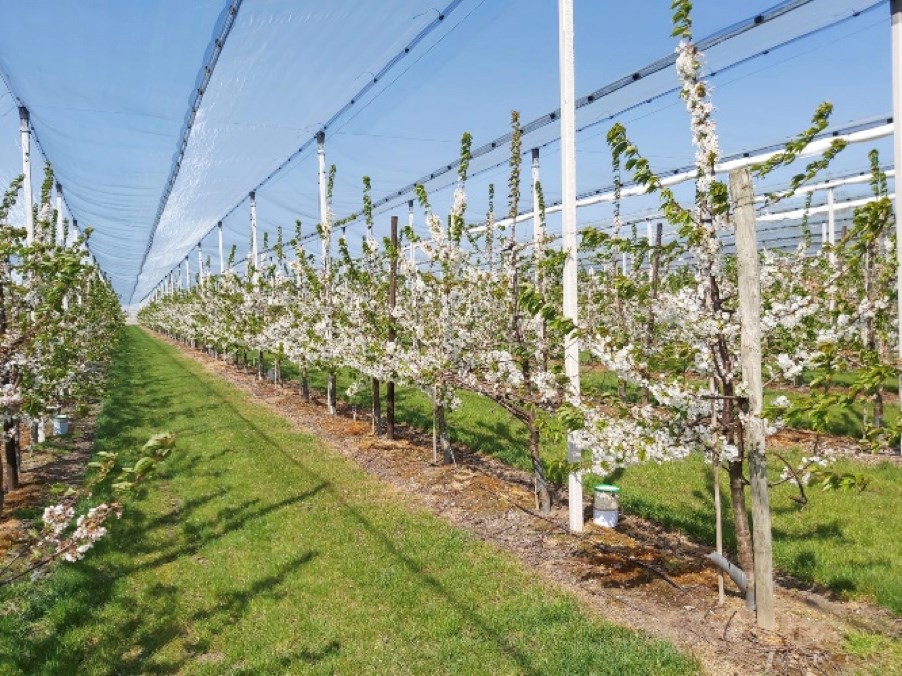 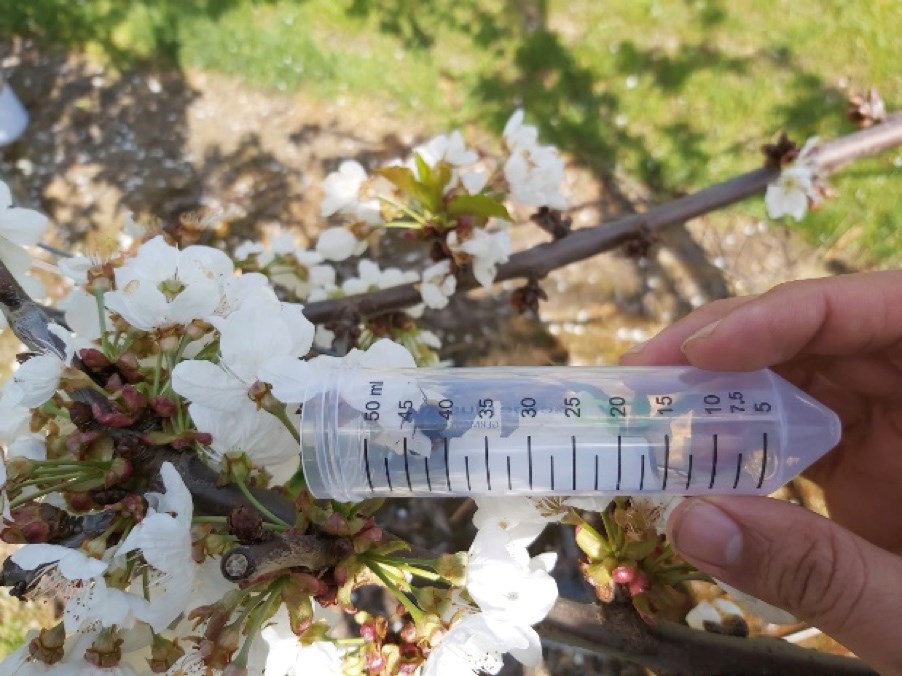 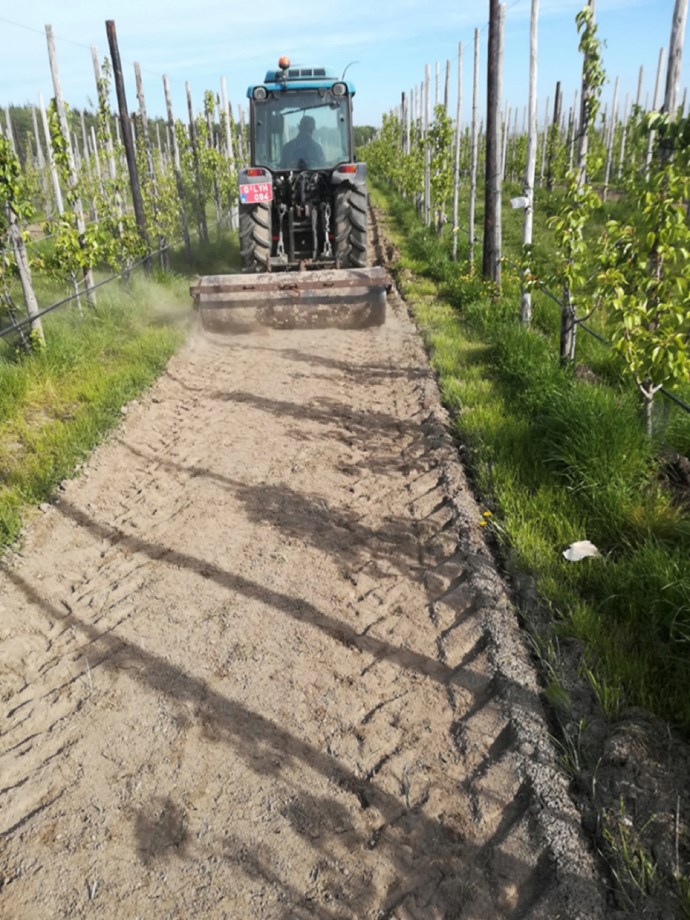 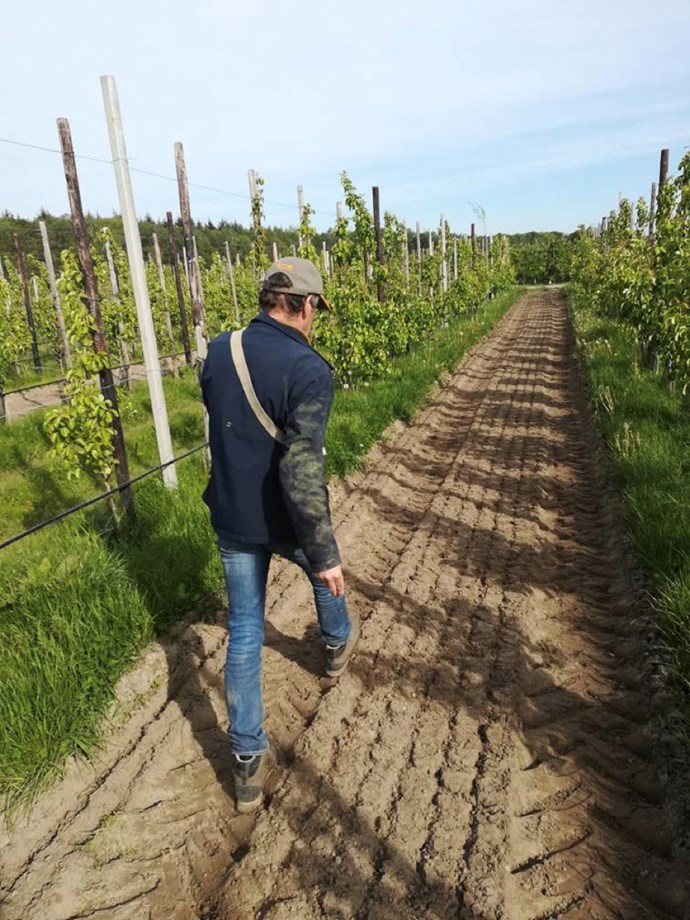 In the Netherlands nine land managers from Agrarisch Collectief Waadrâne U.A. are participating in the project. A new seed mix was developed by Cruydt-Hoeck and 10 flower strips sown next to crops covering 8.15 ha. The strips are adjacent to different crops such as wheat, field beans, rapeseed, flax, potatoes and sugar beet. Van Hall Larenstein University are investigating how the mixes effect insect levels in the mixes and adjacent crops. 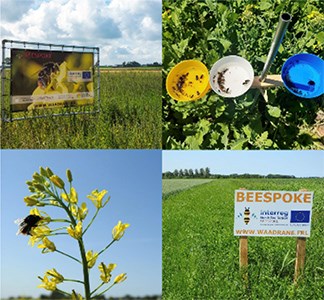 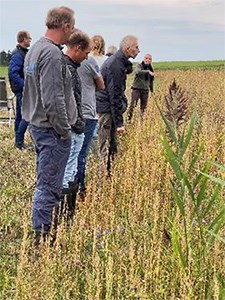 In Germany, to investigate the potential for increasing the floral diversity of grassland, four novel grass seed mixtures and a control comparison were each established at 5 sites. This is jointly managed and monitored by Carl von Ossietzky Universität Oldenburg and Grünlandzentrum Niedersachsen / Bremen. Use of the mixes by pollinators is being evaluated.

A new, diverse perennial flower mixtures was sown in the production areas at three farm sites with either apples and/or strawberries. The seed mix was also sown at the Pometum which is the experimental research station of the University of Copenhagen. The university and HortiAdvice Scandinavia A/S are measuring levels of pollinators in the wildflower areas and crop, and also the impact on crop pollination, yield and quality. 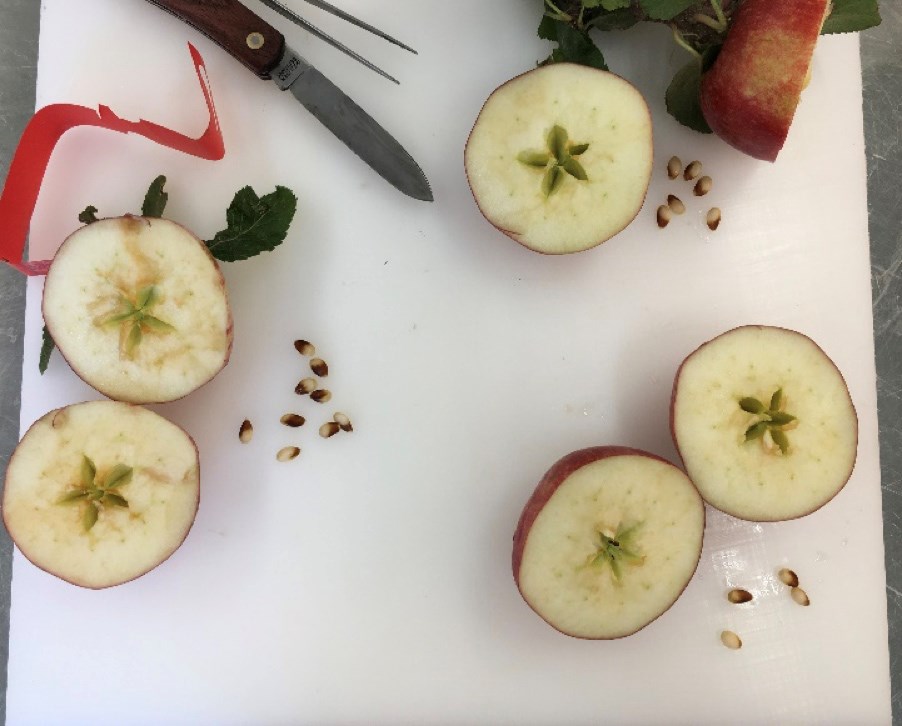 Odling I Balans has designed three new mixes and they are being tested at three sites, with evaluations of use by pollinators at two of the sites.

Development and testing of protocols for measuring pollinators and pollination

Draft protocols for the determining the levels of insect pollinators have been prepared by the partners and were tested in their new mixes and some crops during 2020. Protocols for the measurement of pollination in apple/pear, cherry, strawberry and field beans were prepared and tested in the trials with the new seed mixes.

The effect of existing habitats surrounding fields on levels of pollinators and crop pollination were tested for field beans in Belgium, Netherlands and UK. In Belgium measurements of pollinators and pollination were conducted along transects extending into the field from the crop edge for six fields. A range of different insect sampling techniques are being evaluated. 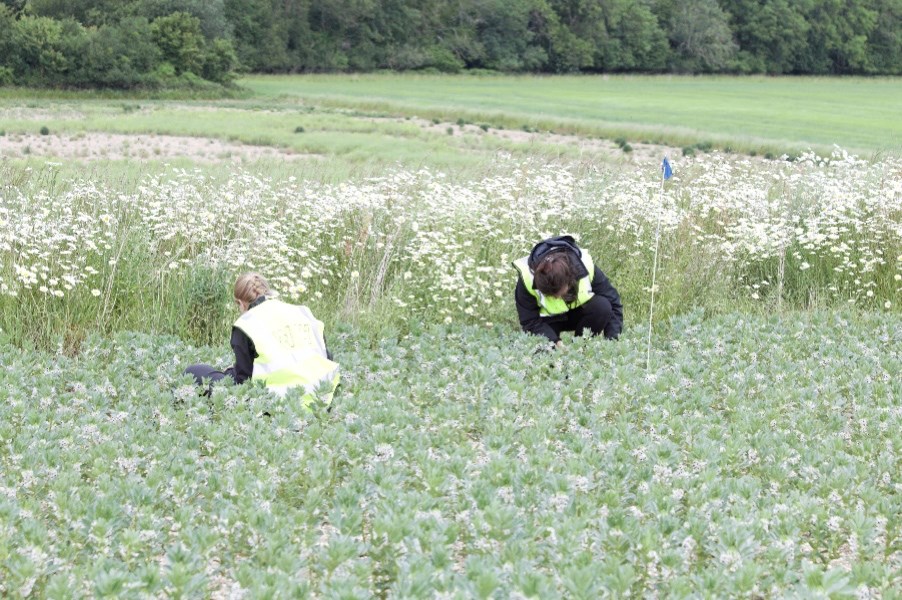 Modelling of pollination services at the landscape scale

VHL is engaged in a student study on modelling carrying capacity of the demonstration sites in the North Frisian clay landscape for Bumblebees, utilizing the available Bumblebeehave model. Furthermore, VHL is engaged in general assessments of chances for insects in the agricultural landscape in general by using spatial distribution modelling and producing chance maps. These maps are currently used by the Province of Friesland to help design and assess initiatives for improving the insect network Friesland. 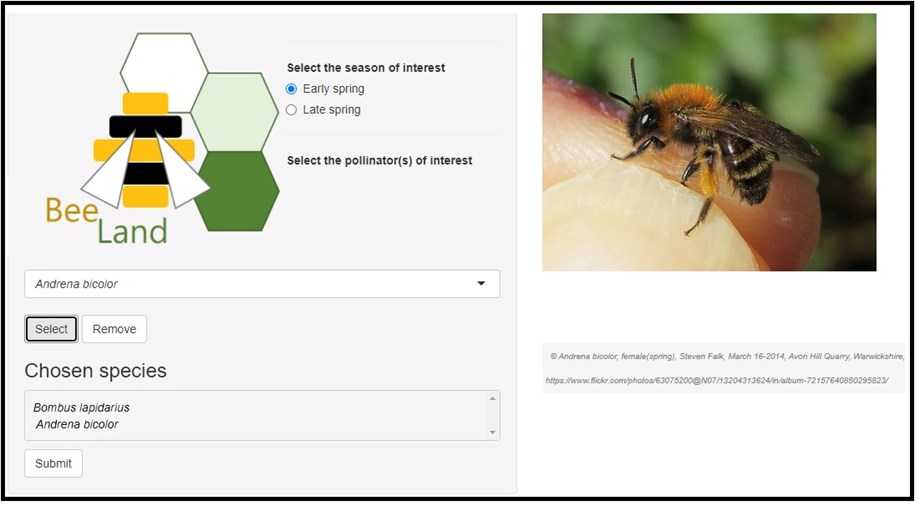 The project has set-up an active Facebook page and partners are publishing newsletters of activities in their region. At this stage of the project we are focussing on establishing demonstration sites and gathering new information to inform the stakeholders such as the development of new seed mixes, testing of protocols for measuring pollinators and pollination, and evaluating the contribution of pollination to crop yield and quality. Over the course of the project we will develop practical advisory leaflets for farmers and growers and make many easy to follow videos.